What Are Treasury Rates and Why Do They Matter?

Treasury rates can be thought of as the backbone of the global economy. You can use the yield curve, which is a measure of interest rate expectations, to get an idea of economic conditions and trends. 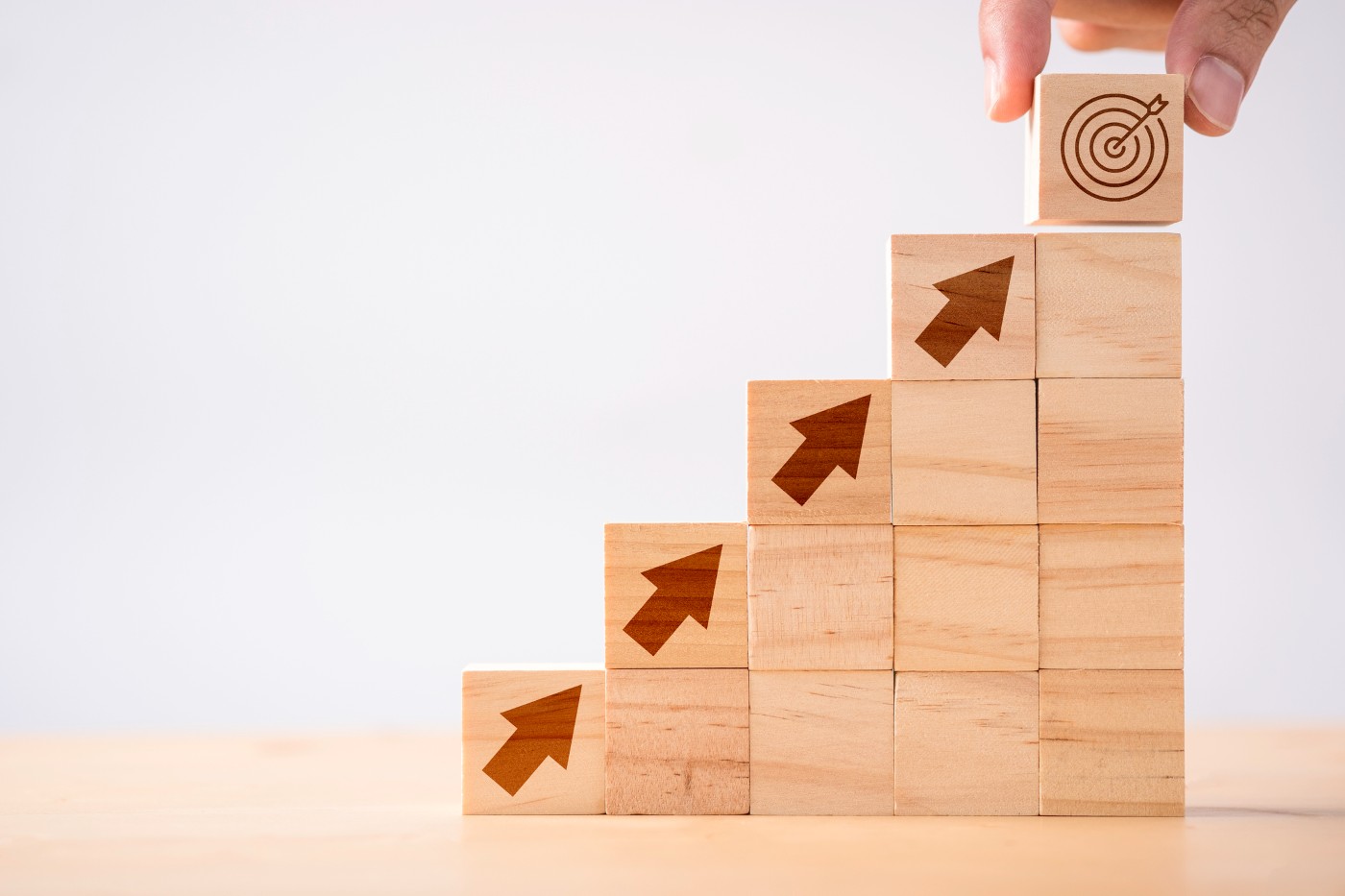 Tune in to a financial channel or open a financial news app and it won’t be long before you see or hear talk of Treasury rates—the interest rates on Treasury securities (bonds, notes, and bills) of varying maturities. Why is so much attention paid to Treasury rates?

So, why is it important to follow Treasury rates? Put it this way: When looking to buy or sell something, you look at its price in money terms. But what’s the “price” of that money? The interest rate you might pay for a home mortgage or auto loan, as well as the interest paid to you on a deposit, is set relative to what your finance textbook calls the “risk-free” rate. (Although no investment is truly risk free, U.S. Treasuries are usually seen as about as safe as it gets.)

It All Starts with the Yield Curve

If you follow the financial press, you’ve likely heard of the yield curve.

At its core, the yield curve is a measure of interest rate expectations. It’s a graph of Treasury yields across different maturities. Short-term maturities like bills and notes are plotted on the front (left side) of the curve, while long-term maturities or bonds are plotted further out (right side). See examples in figures 1, 2, and 3.

The yield curve can slope upward (positive slope). It can invert (negative slope), and it can even be flat, although that may sound like a contradiction (how can a curve be flat, anyway?). Some analysts equate an inversion of the yield curve with possible economic malaise, though the relationship is up for debate.

A positive-sloping yield curve is thought of as “normal.” Why? With bond investments, your principal isn’t returned until maturity. The longer your principal is tied up—all else equal—the more risk you carry. A higher yield is a way of compensating you for the added risk.

Sometimes the curve will invert with shorter-term Treasuries yielding more than longer-dated ones. A negative-sloping or “inverted” yield curve is typically an abnormal scenario that has historically signaled a looming recession. This scenario makes sense if investors believe:

An inverted yield curve has historically indicated that growth expectations in the short term are overstated and the outlook for growth has become less optimistic. An inversion of the yield curve can sometimes be a warning sign for stock investors because it signals possible slowing corporate profits and a potential fall in stock prices. For instance, the yield curve inverted in 1999 and 2007—right before bear markets in stocks and recessions.

The yield curve inverted again in 2019 ahead of the coronavirus pandemic, as the Fed raised short-term interest rates but long-term rates stayed stubbornly low as investors perceived the rate hikes as too aggressive. In addition, the yield curve began to flatten in mid-2021 after the Fed suggested it might get more hawkish, leading to fears of the economy slowing.

In between the two yield curve slopes is the flat yield curve, where rates are roughly the same across maturities. A flat yield curve is also rare and usually forms when the curve is transitioning from normal to inverted, or inverted to normal. Scroll through figures 1, 2, and 3 to see examples of the three yield curve shapes. 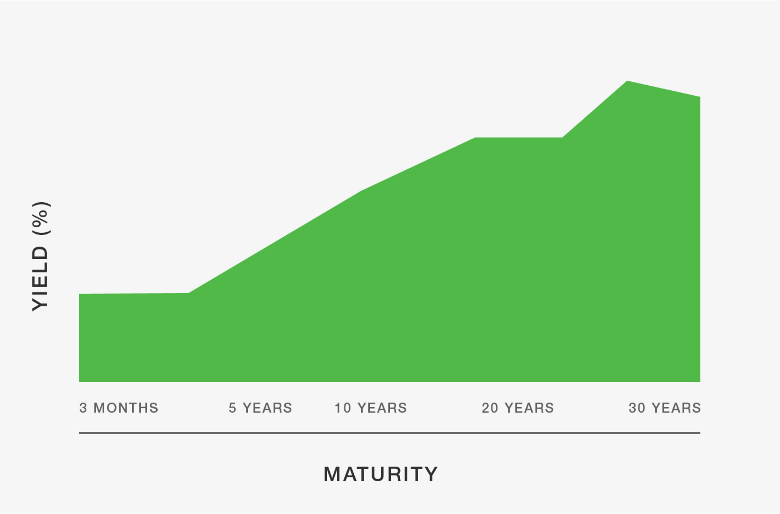 FIGURE 1: THINK POSITIVE. Positive-sloping or normal yield curve from left to right across maturities. For illustrative purposes only. 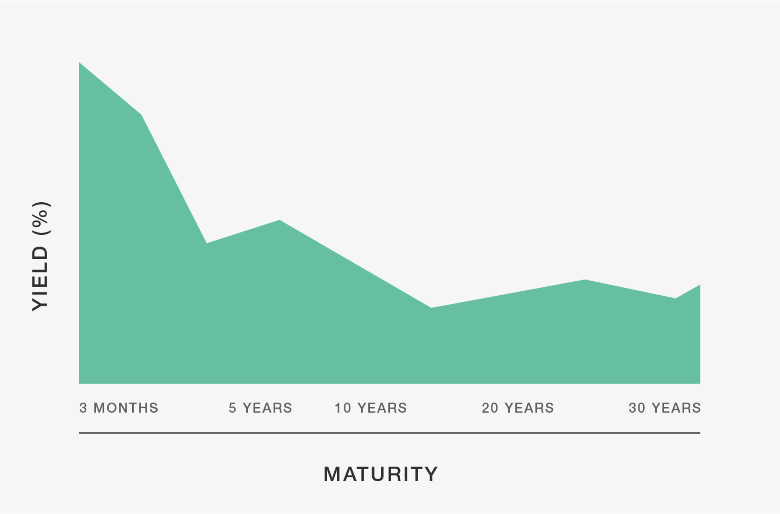 FIGURE 2. DOWNHILL FROM HERE? A negatively sloping or inverted curve. This unusual shape can signal an economic recession and possible bear stock market. For illustrative purposes only. 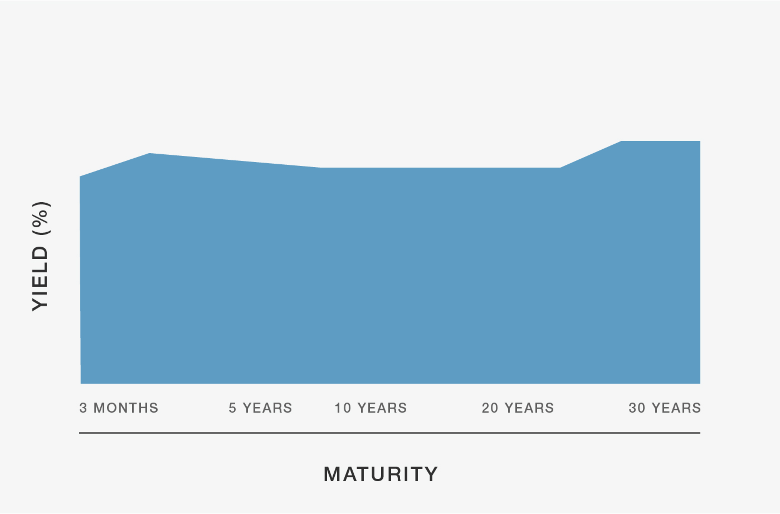 The shape of the yield curve—or the “price of money” across maturities—can tell you a lot about current economic conditions and expectations. For example, an inverted yield curve can be quite attractive because you can borrow money with lower interest rates at longer maturities than at shorter maturities. In other words, you’re compensated for holding a loan for longer periods of time.

But lenders tend to catch on quite quickly and are often quick to turn off the spigot. Remember: The standard business model for a bank is to borrow at the short end (yes, the money in your checking account and other deposits is essentially a short-term loan to the bank) and lend for the long term (think mortgages, auto loans, and business loans.

In a normal yield curve environment, this is a profitable endeavor for the bank. But with a flat or inverted yield curve, banks can and do feel pressure at the margins, which is why the Financials sector of the stock market can come under pressure when the curve flattens, as we saw in 2019 and in mid-2021. Plus, an inverted yield curve often signals investor fear and can lead investors to gravitate toward the perceived “safety” of longer-dated Treasuries instead of riskier assets like stocks and corporate bonds.

The stock market also can move up or down based on Treasury rates. A long period of low rates in the 2015-2020 era helped stocks climb to record highs, in part because companies could borrow at low rates. Fear of higher rates potentially hurting future corporate gains receded too, also helping the market. Low rates can be particularly bullish for so-called “growth” sectors like Information Technology, where investors often reward stocks for anticipated future growth.

The Bottom Line on Treasury Rates

During times of uncertainty, you might also see spreads widen between Treasury rates and riskier assets such as lower-rated corporate bonds and those backed by foreign entities, particularly in emerging markets. Again, Treasury rates are the baseline benchmark from which other assets are compared to set a fair compensation for the added risk. And that added risk is in constant flux.

Ultimately, it’s the market that sets the fair value of tradable assets. Sure, the U.S. Treasury constantly auctions new debt, but it’s bound by debt limits set by Congress. And the Federal Reserve controls the rate at which banks borrow and lend reserves (“the federal funds rate”), and it can buy and sell Treasuries and hold them on its balance sheet. In the post-pandemic era, the Fed’s $120 billion a month in bond buying, designed to buttress the economy, led to record low rates in 2020. Still, the Fed only has so much impact, with Treasury rates normally set by market forces of supply and demand. We saw that in early 2021 when the market sent yields of longer-term Treasuries sharply higher despite the Fed sticking to a fed funds rate near zero.