Empty Nesters Flying the Coop? Tips for a Downsized Life

When the kids grow up and move out, it may be time to consider downsizing, and maybe even moving. Here are some things to consider. 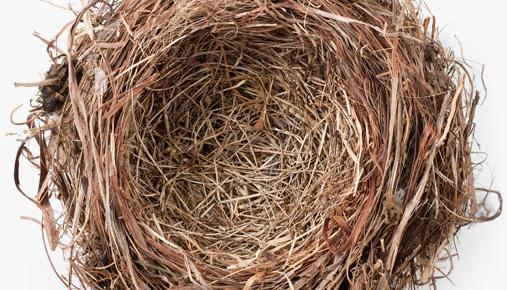 The kids are all grown up and officially out the door. Here you are in this big, empty house, with a yard to maintain and lots of space you may not need as you head into your golden years.

So, now what? It may be time to consider downsizing.

As more baby boomers hit retirement, many are shifting to, or at least considering, a downsized life in some form.

“The trend is accelerating, and for good reasons,” says Robert Siuty, senior financial consultant at TD Ameritrade. “It comes up quite often with people who are fast approaching or already in the early stages of retirement. They have more square footage than they need. A larger house made sense when they were raising kids.”

Downsizing doesn’t necessarily mean you have to move. Still, there are several critical factors—financial, logistical, physical, and emotional—to ponder carefully before taking this step. Here are a few pointers.

It’s pretty simple math: more house, more bills to pay—for utilities, property taxes, and so on. Downsizing “may make sense from an expense standpoint,” Siuty says. “Once you retire, you want to watch expenses as much as possible, so you can do other things with your cash flow, like travel or hobbies.”

Property taxes, for example, have risen sharply in the past two decades, Siuty notes. A homeowner may have paid, say, $5,000 a year at one time; today, it could be double or triple that.

Ultimately, this area comes down to smart budgeting and cost-benefit analysis. “Take pen to paper and figure out what it costs to live in your current home, versus living in another home,” Siuty says. “What are your committed expenses that you know you have to pay, year in and year out?”

Condo Life for You?

Gleaming urban high-rises aren’t the only option if you go this route; two- and three-bedroom condos and townhouses have sprung up across the American suburbs and other communities in recent years.

Prices vary widely depending on location, but the up-front cost can make sense. In the second quarter, the median condo sales price for U.S. metropolitan areas was $239,500, compared with $255,600 for existing single-family homes, according to the National Association of Realtors.

There are trade-offs: more neighbors, closer to you, and assessments for building maintenance and other fees that can run into hundreds of dollars a month. Still, part of a condo’s appeal is that somebody else is typically doing the upkeep and handling security for you, Siuty says.

Also, a condo is “very turn-key,” he adds. “If you want to go on vacation or take a trip, you can just lock the door and walk away.”

Renting, or Just a Smaller House?

Like home sales prices, apartment and house rental rates vary widely (in Chicago and Minneapolis, for example, two-bedroom apartments rent for about $2,300 a month on average; in Raleigh, N.C., it’s about $1,400; in Birmingham, about $1,100).

People who currently have a multi-floor, 3,500- to 4,000-square-foot house could find a dwelling about half that size and still live in an actual house, Siuty says—by seeking out a single-story ranch home, for example.

Or, you might rent a home in a warm-weather location, such as Arizona or Florida, to ride out the winter. That kind of setup “gives you the kind of lifestyle where you can get away for the winter, but still have manageable expenses, without committing” to a home purchase, Siuty says.

Moving isn’t desirable or feasible for everyone, and many people in their 50s and older prefer to “age in place,” according to AARP.

Nothing wrong with that at all. People often develop a comfort level and deep emotional attachments to a home in which they’ve lived for years. Plus, if the mortgage is paid off, that may leave only regular, recurring expenses, like utilities and property taxes.

“If that makes sense financially, and you don’t necessarily have to downsize, that’s a great situation,” Siuty says. But all this leads to another important question: what to do with all that “stuff”?

Recent years have witnessed rapid growth in what might be deemed the “decluttering” industry – services that help older people move into smaller spaces, or stay where they are and whittle down their possessions.

Member companies in Hinsdale, Illinois–based National Association of Senior Move Managers reached 1,000 this year, compared to 50 a decade ago, according to Jennifer Pickett, the group’s associate executive director. These firms, among other services, help homeowners identify things that could be thrown out, donated, or kept. Rates average $40 to $80 an hour, and a little higher in big markets like Boston or New York, Pickett says.

She attributes her industry’s growth, in part, to an “IKEA/Target” generation—children of baby boomers with a less-is-more kind of mindset. “They’re more minimalists,” Pickett says. “They don’t have the same attachment to dining room sets and other big things like their parents did.”

Coming to Terms / Kids, Move It or Lose It

Downsizing often involves grappling with decades’ worth of memories—it’s hard. Also, there’s not always a market for many of the things you might consider valuable heirlooms.

Part of the battle is effective communication with children. In other words, understand that your kids may not want a lot of your old things, and vice versa.

“Our clients have inherited stuff from parents, they’ve absorbed a lot of that family history,” says Allison Pihl, a partner with Let’s Move LLC, a Fulton, Maryland–based downsizing and moving service. “One of the hardest things for people is recognizing that their kids don’t want a lot of their things, then turning to their kids and saying, ‘I can’t keep these. Either take this or I’m going to get rid of it.’”

Don’t let yourself become a storage facility. Pihl recommends giving children one month, or some other reasonable time frame, to come over and reclaim what they want. “Then, these things need to be out of here, or I’m going to box them up and donate them,” she adds.

TD Ameritrade, Inc. and all third parties mentioned are separate and unafiliated and are not responsible for each other's policies and services.