The future for 3D printing may have a long way to go. Learn which companies are making inroads and which are running out of ink. 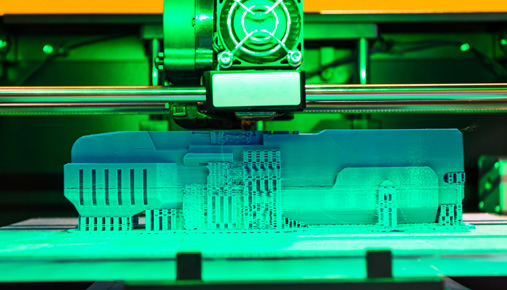 There’s a lot of excitement surrounding 3D printers, as these machines can be used to create just about anything.

From shoes to architectural models, low-cost prosthetics, and even human tissue, 3D printing has come a long way since the first patent for it was issued in 1980. And the future for 3D printing may have a long way to go, too.

Also known as additive manufacturing because it builds objects by adding materials layer by layer in cross-sections, 3D printing has the potential to “have a greater impact on the world over the next 20 years than all of the innovations from the industrial revolution combined,” said Deloitte in a research note.

The Consumer Technology Association forecasts the 3D printing industry to reach $7.3 billion in 2016 and set to nearly triple by 2020.

Deloitte said costs for 3D printers have decreased drastically in recent years, with commercial printers now costing between $2,000 and $5,000, down from about $10,000 to $20,000 previously. “Although traditional manufacturing will likely still hold a place in the competitive landscape in the years to come, the next 10 to 20 years promise to reveal a rapid increase in the innovations made possible by 3D printing,” the firm says, noting that traditional manufacturing still has the edge when it comes to economies of scale.

CCS Insight said in a research note that printer “growth is driven mostly by the education sector—schools and public libraries—while household ownership is mainly limited to individual hobbyists. Although industrial 3D printers are on a stable growth trajectory, question marks about consumer adoption and household ownership of 3D printers remain.”

There are a few publicly traded, pure-play companies in the 3D printing industry, but nearly all of them are small-capitalization firms, so investors need to keep that and the associated risks in mind.

The biggest company in this field is 3D Systems (DDD), which has a market cap of $1.82 billion. The firm provides 3D modeling, rapid prototyping, and manufacturing solutions. Stratasys Ltd (SSYS) is often mentioned with 3D Systems when talking about this industry. It has a market cap of about $1.19 billion, and it manufactures 3D printers and materials.

Another company is German firm Voxeljet AG (VJET), which serves the automotive, aerospace, film and entertainment, art and architecture, engineering, and consumer product industries. Its market cap is just over $78 million.

Investors need to keep in mind the extreme volatility of these stocks. For instance, 2014 was a good year for 3D printer shares, with 3D Systems and Stratasys both over $100 a share, but now these stocks trade in ranges of roughly $16 to $20. Voxeljet was as high as $60, but now is around $4.

For those skittish of small-cap stocks, Hewlett-Packard (HPQ) is also in the field, although not a pure play. Analysts note that HP is making inroads into the 3D printing market with its Multi Jet Fusion technology.

“The fact that a big-name multinational company is branching into additive manufacturing illustrates the growth and increasing legitimacy of this market,” according to Investing News.

Use Stock Screener to narrow selections based on sectors like technology. Log in at tdameritrade.com > Research & Ideas > Screeners > Stocks.

Learn how to harness technology to generate investing ideas »
Print