Following the dollar/euro and other aspects of the global currency markets can provide valuable insight for an investing strategy. 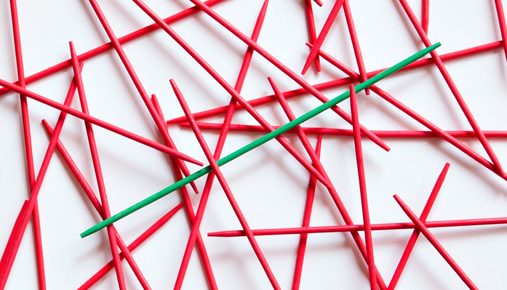 You might not trade currencies, but you should know what they’re up to. Why? Because the dollar, the yen and others tell the story of our global economy in real time.

There are many “big” markets all around us, in terms of money changing hands, shares traded, or whatever. The U.S. stock market is big. Then there’s the foreign exchange market, which makes everything else look like a herd of Munchkins. Some $5.3 trillion traded across global forex markets every day in 2013, according to the Bank for International Settlements. That’s “trillion” with a “t.”

For equity investors, there are many nuggets of insight from the forex market that can inform your strategy. In other words, you can watch currencies without trading them. We’re not talking about just taking a quick glance at exchange rates before you jet off to Paris for your summer holiday. We’re going a bit deeper. Here are a few factors to keep an eye on.

When it comes to forex, it’s still all about the Benjamins. The dollar remains the world’s “reserve currency”, and the performance of almost any other monetary unit that matters is measured against the greenback.

For many years, a strong dollar typically coincided with a strong U.S. stock market. Investors figured that, given the usually robust American economy and its citizens’ buying power, you could buy here and sell later at a profit. But that relationship changed about a decade ago—a few years after the euro came along. Then we had the 2008 financial crisis and the Federal Reserve’s near-zero interest rate policy, which altered the equation. 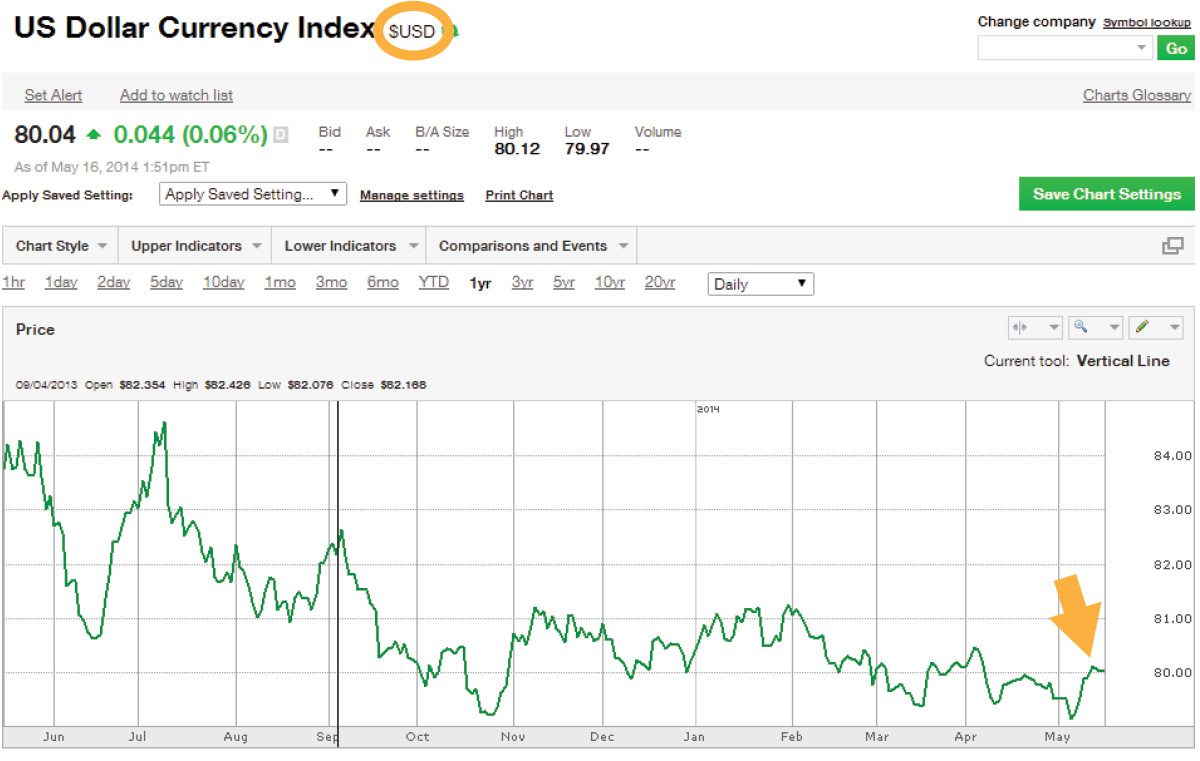 FIGURE 1: GREENBACK GROUNDING. The U.S. dollar index (ticker $USD), a measure against six other major currencies, was down about 5% oer the past year and in early May hit the lowest point since September 2012. Source: TD Ameritrade. For illustrative purposes only.

“The dollar and stocks used to be fairly well correlated,” said Ryan Campbell, Education Coach, TD Ameritrade. “Now, generally speaking, if the dollar is weak, stocks will rise. This is one of the arguments that the growth in the stock market over the last three years is inflated growth, and not ‘real.’”

Indeed, as the Standard & Poor’s 500 Index climbed to all-time highs this year, up 13% over the past 12 months, the dollar eroded against the euro and other major counterparts. The U.S. dollar index, which can be found on tdameritrade.com, fell about 5% over the same period (see figure 1).

The apparent inversion of the dollar’s correlation with U.S. stocks may at least partly reflect the Fed holding benchmark short-term rates near zero for over five years, Campbell said. That reduced the allure of many bonds and other fixed-income assets and prompted investors seeking higher returns to throw money into stocks.

Getting to Know FX

Foreign exchange is the largest market in the world and has many moving parts. One way to approach it is through regulated U.S. futures exchanges, which offer contracts that closely track the British pound, Mexican peso and other currencies.

Campbell suggested keeping an eye on the dollar/euro for clues to potential moves in the U.S. stock market. In mid-May, it took about $1.37 to buy one euro, and the dollar was about 6.5% weaker than it was a year earlier. Earlier in May, the dollar touched $1.393, its weakest point since September 2011.

If the euro rises against the dollar, recent correlation data indicates U.S. stocks will follow suit, although that’s not guaranteed considering the numerous other factors affecting equity prices. A similar dynamic may apply if the euro declines, Campbell said. “This is important right now because the dollar/euro is struggling with a long-term resistance levels” above $1.40, he added (see figure 2). 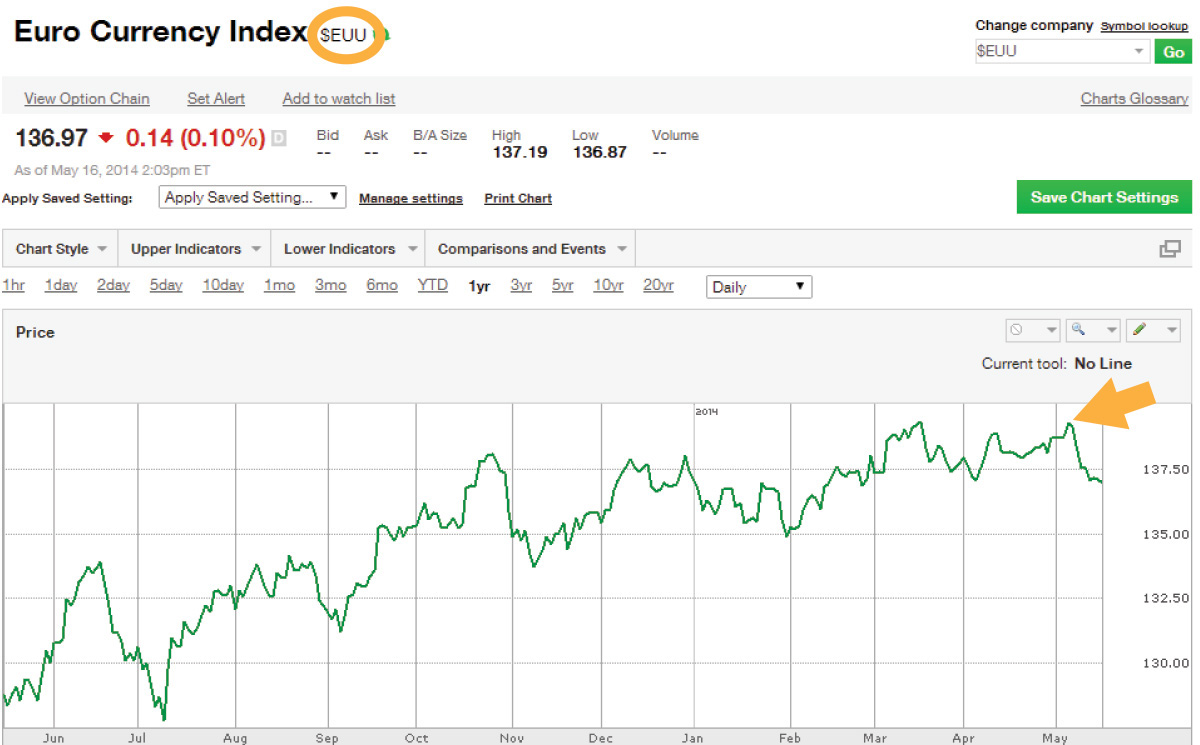 FIGURE 2: EURO TRIP. The euro has gained against the U.S. dollar for more than a year, recently reaching its strongest point since September 2011, above $1.39 (yellow arrow); this chart reflects an index based on the dollar/euro pair (ticker $EUU). Source: TD Ameritrade. For illustrative purposes only.

Take a look at your account statement. Do you see any companies that are based in the good old U.S.A. but do a lot of business overseas—Asia, Europe, South America, etc.? If so, you’re already in the forex market, in a manner of speaking.

This can get complicated, taking us into fluctuations of multiple currencies and arcane corporate tax rates across different countries. But broadly speaking, if a U.S.-based company generates a chunk of its sales outside the country, say, in Europe, then it must convert that revenue from euros (or other European currency) into dollars when it brings the money home. Therefore, currency exchange rates have an impact on the business’s bottom line, and, to some extent, the share price.

Since the dollar/euro is linked to huge, mostly stable economies, it typically doesn’t make large swings from quarter to quarter, so any impact on the company’s results is often minimal—maybe a few cents per share each quarter. Still, if you’re investing in multinationals, check recent earnings reports for any notes on “currency fluctuations” and the effect on margins and other financial metrics, positive or negative. Look also for references to “hedging” currency exposure to see what steps, if any, corporations are taking to manage this kind of risk. Furthermore, keep in mind that weakness in the dollar can make it costlier for some U.S. companies to purchase raw materials or services from other countries with stronger currencies.

The dollar/yen is one of the most actively traded and widely followed currency pairs, carrying with it a complex brew of history, politics and trade relations between two of the world’s most prosperous nations. It can be a fascinating dynamic to follow.

Look at the dollar/yen as a proxy for the global market’s risk appetite— a “risk-on, risk-off” signal. Given Japan’s rock-bottom rates, yen-based investments are viewed as low-yielding but safe. That means the yen often rallies when investors gravitate to Japan in search of a safe haven during tumultuous markets. Conversely, the yen weakens when investors are willing to take more chances in countries offering higher returns.

In mid-May, one dollar bought about 101.5 yen. Still, the greenback has appreciated 32% versus the yen since the start of 2012, which largely reflects the Bank of Japan’s rate-slashing, money-printing efforts to kick-start a lackluster economy.

Trading futures and forex involves speculation, and the risk of loss can be substantial. Clients must consider all relevant risk factors, including their own personal financial situation, before trading.

Trading foreign exchange on margin carries a high level of risk, as well as its own unique risk factors. Forex investments are subject to counter-party risk, as there is no central clearing organization for these transactions. Please read the Forex Risk Disclosure before trading this product.