Volatility Tips: When High Tide Is the New Low Tide

When trying to select the right option strategies, which do you choose? Looking to IV percentiles for clues to VIX levels may help. 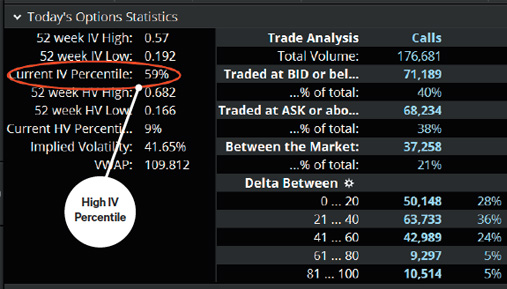 This fall Madison Avenue will tell us that some color—red? blue? yellow?—is the new black. And whatever you wear in that color, the experts promise, you’ll look younger, or thinner, or get invited to more A-list parties. In reality, you’ll likely be home on Friday night as usual, but it’s still a signal there’s been a fashion change.

Like all things Wall Street, this isn’t absolute, but it’s another indicator to keep in your pocket. So without Madison Avenue to clue us in, how can we tell if the VIX has switched colors?

FIGURE 1: WHAT’S IV PERCENTILE GOT TO DO WITH IT?

The larger the IV percentile, the higher the current IV relative to past values. The IV used for the percentile is the volatility index for the stock, index, or ETF you're eyeing. That’s the CBOE’s VIX-style calculation based on the symbol’s options. So, it’s an overall implied vol number.

A value is “mean reverting” if it oscillates around some average value. For volatility, mean reversion describes when IV goes up, then comes back down to an average. When it goes down, it comes back up to an average—and so on. But IV is only an estimate.

Take the VIX. It might oscillate up and down around 16% like it did for much of 2015. Then when uncertainty builds in the market, the VIX moves higher. And it might stay higher, oscillating around a new, higher mean—as it did when it hit 20% in the early weeks of 2016. Here’s the catch: there’s no way to know when IV is starting to revert to a higher or lower mean. In other words, IV is mean reverting... until it isn’t.