Boomer U: Lifelong Learning for Seniors Heading Back to the Classroom

Seniors are returning to the classroom to continue their education and skills for a more fulfilling and meaningful retirement. 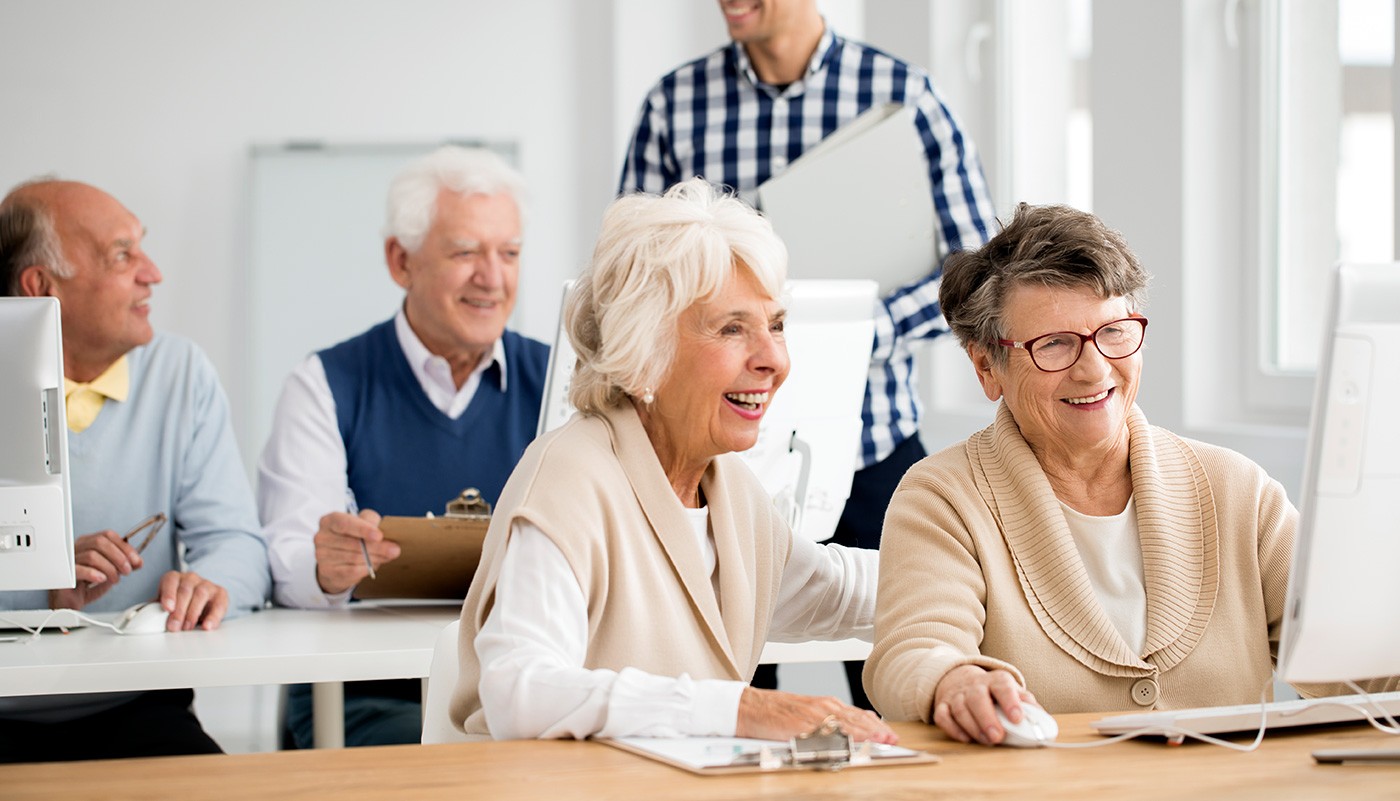 During this graduation season, there will probably be many retirees watching their grandchildren complete their university educations and head off into fledgling careers. But there will also likely be many seniors sitting up front during commencement waiting to get their own diplomas.

Whether they’re seeking a degree from a university or focusing on a certain skill at a community college, thousands of seniors interested in lifelong learning go back to school each year.

Take 60-something Larry Johnson for example. After graduating from Georgia State University last year, his tweet about the experience garnered more than 480,000 likes and has been retweeted nearly 88,000 times.

“My goal was to graduate before I reached 100 years of age,” he said in the May 2018 tweet. “I made it with 33 years to spare.” Last month, as his graduation anniversary neared, he tweeted again, saying, “My viral tweet that won’t die seems to have a resurgence during every graduation season.”

Johnson, who is the editor and publisher of a Georgia newspaper, thinks his message resonates with many people because they have similar goals. “I think, judging by the replies I got to the tweet, that a lot of students who had delays in their schooling were encouraged that there was no time limit on finishing their degrees,” he said.

Johnson isn’t alone. According to government data analyzed by Robert Kelchen, a Seton Hall University professor of higher education finance, there were more than 500,000 students 50 years old or older enrolled in undergraduate institutions for the fall term in 2015.

Some may want to prove a point to their grandkids that “you’re never too old to finish things you started,” said Jaime Ross, the director of adult student services at Missouri State University.

Benefits of Taking Classes as a Senior

As baby boomers age, they may begin looking for things to keep their minds healthy and stay engaged in general, such as art, language, computer, or finance classes, according to Sue Johansen, director of sales with A Place for Mom, which bills itself as the largest senior living referral service in the U.S. and Canada.

“Seniors are looking to expand their horizons,” she said.

In addition to the knowledge they can gain from lifelong learning, going back to school after retirement also offers the benefits of socialization to seniors who may have faced the death of a spouse or friends, Johansen explained.

“One of the challenges for seniors is social isolation,” she said.

Other benefits include cognitive stimulation, which can help with brain health, plus the physical activity that can come from walking around a campus, Johansen added.

TD Ameritrade clients can freely access a wide range of educational resources—immersive courses on trading and investing, plus a catalog of videos, tutorials, and more.

“School can sometimes fill voids for these students,” Ross said.

Figuring out how to pay for education isn’t just an issue for young people, and millennials aren’t the only ones dealing with student debt.

A January 2017 report from the Consumer Financial Protection Bureau found that in 2015, older consumers owed an estimated $66.7 billion in student loans, including for themselves as well as for their children and grandchildren. Consumers age 60 and older made up the fastest-growing age segment of the student loan market, according to the report.

For those who aren’t getting free education, Dara Luber, senior manager of retirement at TD Ameritrade, pointed out that the most important thing is to work the cost of courses, transportation, books, and other associated expenses into a financial plan and budget.

“You don’t want to risk retirement savings that you might need in the future or deplete any emergency savings,” she said.

If paying for education isn’t in your budget, Luber suggested seniors can look into taking free online classes or free courses at some state schools. Seniors might also be able to audit classes without paying, which can make sense for those who don’t need credits and just want to learn. There may also be classes from libraries or other local resources as well as the potential for scholarships that don’t have age restrictions.

In response to Johnson’s viral graduation tweet, someone replied with a post about “waiting til your twilight years to rack up crippling debt.” But Johnson explained that when he entered college in 1969 tuition was “cheap,” and in the 1980s, when he entered again, he took classes as he could afford them. But tuition for his final push toward graduation was free because he was older than 62, which in Georgia qualifies students for no-cost tuition.

Many tax-deferred savings plans such as traditional IRAs and 401(k) plans come with required minimum distributions (RMDs) once the account owner turns 70.5 years old. For those who might not need their RMDs for living expenses, but are required to take them, Luber suggested that some might consider using the money to fund a tax advantaged education savings plan such as a 529 account.

Although you’ll still have to pay taxes on your retirement account distribution, putting what’s left into a 529 account will allow the funds to potentially grow tax deferred. Plus, the distributions may be tax free if they’re used for qualified higher education expenses at eligible institutions, which includes colleges, universities, and trade schools that offer programs that are recognized by the Department of Education, according to Luber. Some states also have an in-state tax deduction on contributions. The deductibility of 529 expenses is subject to rules and restrictions, so if you’re unsure, please consult your tax advisor.

“Also, if you don’t use all the money for yourself, you can always change the beneficiary to a child or grandchild,” Luber noted.

Christine Russell, senior manager of retirement and annuities at TD Ameritrade, added that selling tax-deferred 401(k) or IRA assets to pay for classes will increase your taxable income and might increase your Medicare premium, which is based on taxable income.

Instead, those close to a threshold where the premium would rise substantially should consider withdrawing from a Roth IRA or Roth 401(k). Roth assets are generally not taxable to the account owner once they’ve been held for five years, Russell explained.

Regardless of how baby boomers pay for the courses they take as seniors—or if they take advantage of free educational opportunities—as the generation continues to age, Johansen predicted there will be more and more classes for seniors. “We’ll see just a ton more of this,” she said.

An investor should consider a 529 Plan's investment objectives, risks, charges and expenses before investing.  A Program Disclosure Statement that contains this and more information, should be read carefully before investing. Investors should also consider before investing, whether their or their beneficiary’s home state offers any state tax or other state benefits such as financial aid, scholarship funds and protection from creditors that are only available for investments in such state’s qualified tuition program and should consult their tax advisor, attorney and/or other advisor regarding their specific legal, investment or tax situation.  All investments involve risk including the loss of principal.

TD Ameritrade does not provide tax advice.  Every individual’s tax situation is different, and it is important to consult a qualified tax advisor regarding the application of the Plan’s benefits to your own individual situation