Trading Strategies for a Sour Stomach 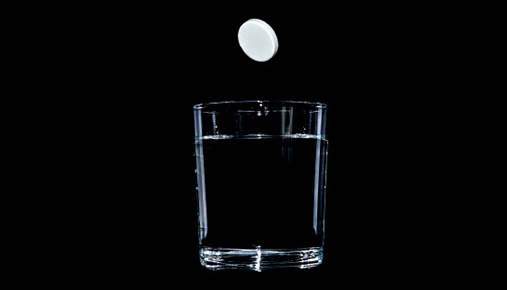 In the world of numbers and analysis, a gut feeling can seem squishy and out of place. But with trading and investing, there’s no denying that our gut instinct can often help. It can make us confident or wary, no matter the analysis we used to determine a bullish or bearish directional bias. And for the record, it’s not that our analysis is wrong. It’s just that our gut remembers past winners and losers and a different part of the brain engages. It’s right brain vs. left brain. In a word, our gut can provide a reality check.

Now, some traders might use their gut as a “go, no-go” indicator. The “go” is all in with long stock, for example. The “no-go” is sit on your hands and do nothing. But there’s a smarter approach that may help fine-tune your trading instincts. Figure out whether your gut is making you slightly confident, semi-confident, or very confident in your bias. Let’s look at a few bullish strategies that may match what your gut might suggest.

SHORT, OUT-OF-THE-MONEY PUT VERTICAL
When looking at a stock, you might believe it will go up—at least that’s what your analysis is telling you. But your gut isn’t quite as psyched about it. It’s telling you that the stock might not go up, and might drop. Since the out-of-the-money (OTM) put vertical has a defined max loss and defined max profit, it might be an appropriate strategy when you’re sort of confident in the direction you think the underlying will go. 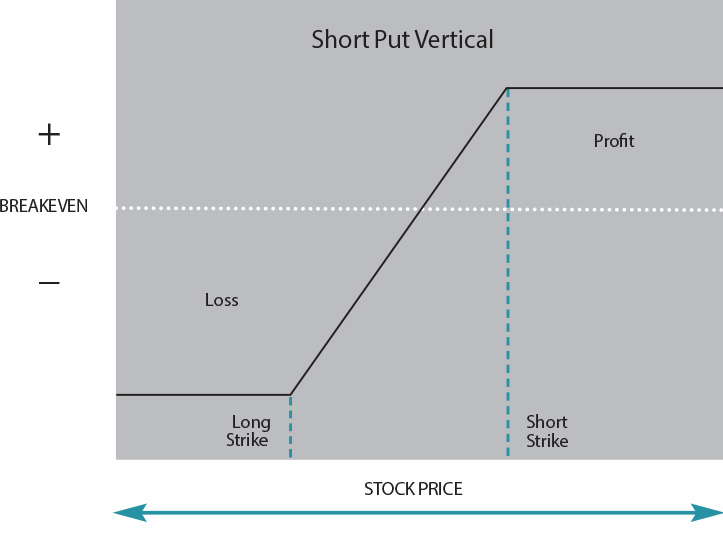 A smaller potential reward with higher probability of success than long verticals, when you’re feeling so-so about the direction of the underlying. For illustrative purposes only.

What the short OTM put vertical does is potentially profit not only if the stock rallies, but also if it sits at its current price, or even drops a bit. More than a bit would mean the stock drops below the short strike plus the credit received, in order to incur a loss. As long as the price of the stock is higher than the strike price of the short put at the expiration of the options, this position can be profitable. A long stock position, for example, can’t do that. If the price of the stock doesn’t go up, or drops, the long stock position isn’t profitable (not counting possible dividends). The short put vertical can also have a lower margin requirement than long stock. That means you don’t need to tie up a lot of your trading capital in a sort-of-confident trade.

NAKED, SHORT OUT-OF-THE-MONEY PUT
Huh? a naked short option if you’re only semi-confident? That may sound risky, but hey, at thinkMoney, we don’t flinch. A short OTM put takes in a credit (the premium received for selling the put), which is its max potential profit (less transaction costs). The max potential loss is the strike price of the put minus the credit you realize for selling it. That’s the loss that would occur if the price of the stock goes to zero. And it’s that large potential loss that might be raising eyebrows for the semi-confident trader. The strategy also includes a high risk of purchasing the underlying stock at the strike price when the market price of the stock will likely be lower. 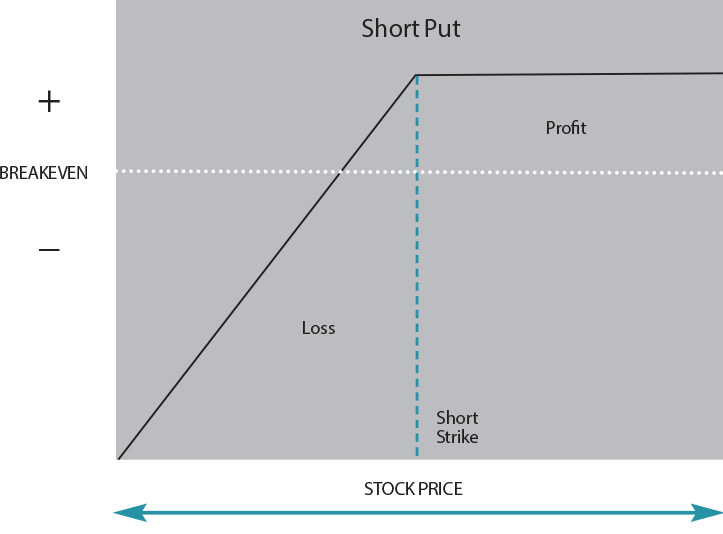 Wee bit bigger potential reward, lots more risk. Still a higher probability of success than a long vertical position, since you could potentially make money even if the stock stands still. For illustrative purposes only.

But think about it. The short put has no more risk than long stock. The losses for both are large if the price of the stock drops sharply, let alone goes to zero. But here’s an advantage for the short OTM put—the price of the stock can sit where it is, or even drop a bit by expiration, and the short OTM put can still be profitable. Long stock can’t do that (save, for possible dividends). A short OTM put also has no greater margin requirement than long stock. In a margin account, the margin on a short put can be lower than on long stock, and in an IRA, the margin on a cash-secured short-put position and a long stock position can be roughly the same. 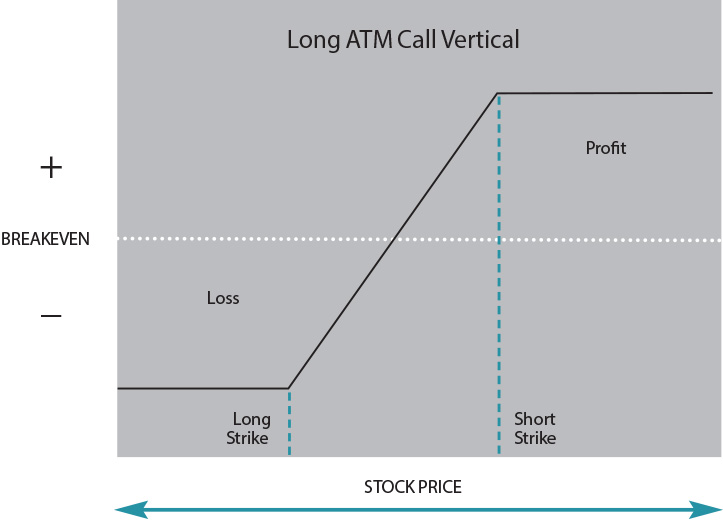 The lowest probability of success among the three strategies discussed here, but the greatest possible reward when you’re feeling warm and fuzzy about the direction of the trend. For illustrative purposes only.

The long ATM call vertical may be a confident choice because it can have a higher delta than an OTM short put vertical, or even a short put—meaning, it can be more responsive to a rise in the stock price. But if you’re so confident, why not just buy stock, or a long call for that matter? Neither caps your upside potential, so why choose it?

The key is understanding that your gut drives strategy, not trade size. The smart way to implement confident analysis is with a strategy that not only reflects that confidence, but also can have lower risk, lower margin requirements, and opportunity to profit if you’re directional bias proves wrong. Remember, your gut gets you in the game. Your brain hopefully gets you paid.

Naked option strategies involve the highest amount of risk and are only appropriate for traders with the highest risk tolerance. Spreads and other multiple leg option strategies can entail substantial transaction costs, including multiple commissions, which may impact any potential return. Supporting documentation for any claims, comparison, statistics, or other technical data will be supplied upon request.