Learn the basics of put ratio spreads and how they can help you pursue your objectives. 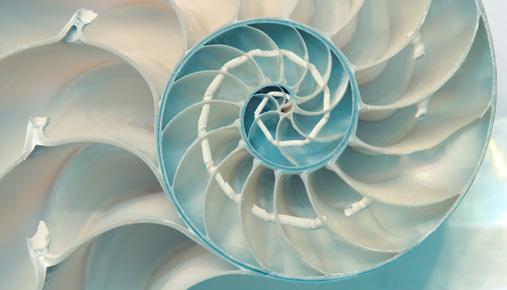 Ready for a primer on put ratio spreads? Take a deep breath and let’s dive in.

For options traders, basic spreads are typically created on a ratio of 1:1. A vertical spread has one long option for every short option. A straddle or strangle consists of the purchase or sale of one call and one put of the same expiration date, and so on.

But ratio spreads, as the name implies, don’t. And although they come in all shapes and sizes, a good place to begin is with a simple 1:2 put ratio spread (or “one-by-two put spread” in trader-speak).

It’s All in the Proportions

A simple put ratio spread consists of the purchase of an out-of-the-money (OTM) put and the sale of two OTM puts of a lower strike. Think of it as a put vertical spread with the sale of an extra put at the lower strike. And as we’ll see, adding that extra put makes the risk profile look a lot different from that of a vertical put spread.

In fact, one strategy is to choose strikes such that more premium is collected on the sale of the two lower-strike puts than is paid to purchase the higher-strike put. In other words, the spread is initiated for a net credit. See figure 1. 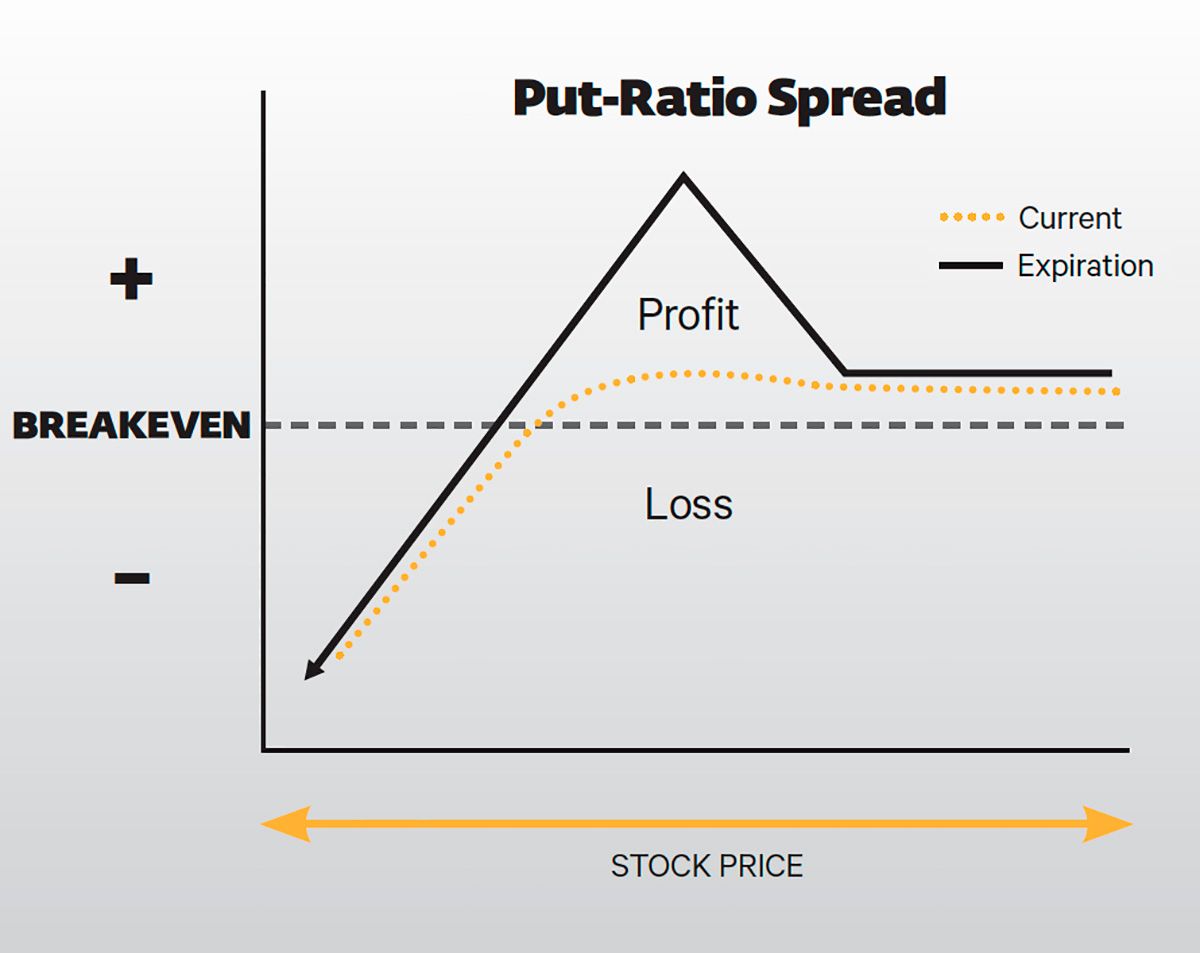 This position maximizes gains if the stock drifts down to the short strike. For illustrative purposes only.

Here’s one rationale behind the put ratio spread. Suppose you have your eye on a certain stock and say, “I don’t want to buy it at the current level, as it looks ripe for a slow drift downward, but if it gets below a certain price, I’d consider buying.”

In figure 1, you can see that the put ratio is designed for just such a scenario. If the stock stays where it is or goes up, you're likely to keep the net premium, minus transaction costs. If it drifts down to your long put strike, you reach your point of maximum profit. If the stock continues down past your short strike at expiration, you’ll likely be left with a long stock position after exercise and assignment.

In other words, with a put ratio spread, you’d better be comfortable with the risk of buying stock (at that lower strike price) because that’s the risk that comes with a ratio. Selling that extra put exposes you to the risk profile of a long stock position if the stock is below the lower strike at expiration. And like any long stock in your portfolio, the downside risk can take you all the way to zero.

The 1:2 Put Ratio in Action 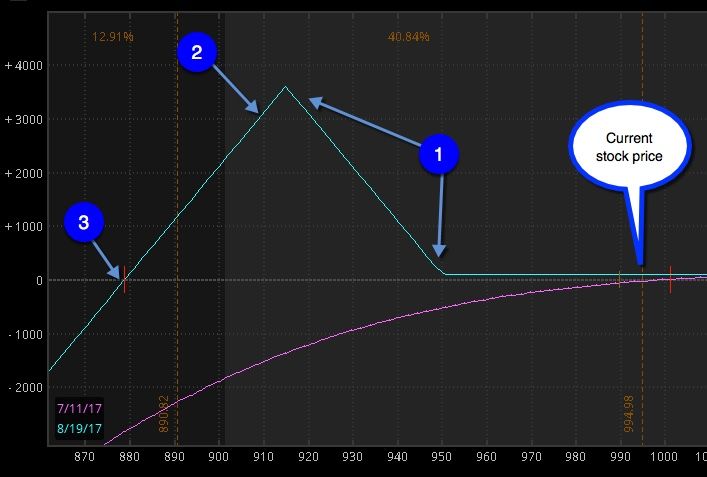 Risk graph showing the 950-915 put ratio trade for a $1 credit, with a breakeven of $879. For illustrative purposes only. Past performance does not guarantee future results.

As you can see in figure 2, if the stock goes below $950, the profit on this spread increases all the way down to the $915 level (1), which is when your short strike becomes in-the-money. Then you’ll start to give those profits back as the second put kicks in below $915 (2).

To calculate the breakeven point, first take the width of the strikes, or (950–915) = $35, and subtract that total from the low strike of 915, or $880. Then, subtract the $1 credit you received from selling the spread for a grand total breakeven point of $879, again, plus transaction costs.

And what if the stock goes up? In that case all the puts expire worthless and the trader is left with the $1 (which is $100 per spread since the options multiplier is 100), minus transaction costs.

In general, the higher the implied volatility of the options when initiating the trade, the higher credit you’ll receive (depending on the strikes you select, of course). When volatility is lower, the opposite will likely be true.

In the example above, if you’re comfortable taking the risk of buying stock at $879, or about 11.5% lower than its current price, this might be a strategy to consider.

In general, when deciding on ratio spread strikes, look for a point where you’d be comfortable buying a stock and consider using that as your short strike. Then, choose a strike closer to at-the-money (ATM). The closer your long strike is to ATM, the less of a net credit you’ll get, but you’ll end up with a wider vertical spread.

But that’s the thing about ratio spreads—it’s all proportional.

Ratio spreads and other multiple-leg option strategies can entail substantial transaction costs which may impact any potential return.