How to Neuter Your Trade with Options 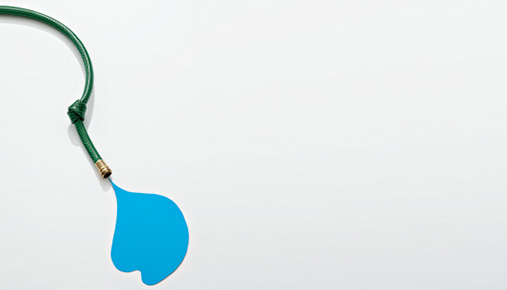 The word conjures images of a discrete Switzerland and fifty shades of beige.

But add the terms “market” or “delta” and the real fun begins. Why? Because “market neutral” and “delta neutral” are trading terms—often confused, confusing, and used interchangeably. Is a market-neutral strategy always delta neutral? Or can a delta-neutral strategy be market neutral? Rather than get into a semantic argument, let’s define them, then explore how you can apply them.

Delta neutral means that the delta of a portfolio or given position—how much money it will make or lose if a stock price changes 1.00, all other factors being equal—is zero, or close to zero.

A simple position like a straddle, or a portfolio holding a lot of different options, can have cumulative delta close to zero, and be considered delta neutral at the onset of a trade, but not likely for long. Delta-neutral trading kicks in when the need arises to “neutralize” deltas, or rather, reset the position’s delta to zero. Market makers employ this technique when there’s too much directional risk—or in trader-speak, too many positive or negative deltas (see sidebar, right)—in a given position. Market makers continuously buy and sell options, and perhaps hedge each option trade with stock. For them, their profits arise from the bid/ask spread, and they don’t want to lose those profits if the stock or index moves in a given direction.

For example, if an order comes into an exchange to buy out-of-the-money (OTM) calls, the market maker takes the other side of the trade by shorting  those calls. The short calls have negative delta, and can lose money if the stock rallies. The market maker may immediately buy stock shares to generate positive deltas, to offset the call’s short deltas. If the stock rallies, he’s hedged. Or, he might see an order for someone trying to buy puts. If he takes the other side of that trade by shorting puts, that too, could generate positive deltas to hedge the short calls. It’s complicated, but being delta neutral keeps the market maker’s directional risk low. In that sense, delta neutral is a response to a question about an existing position. How many deltas does that existing position have, and how can they be reduced? More on that later.

As For Market Neutral...

Market-neutral trading, however, is much closer to what retail traders—you and me—do. We might create a specific strategy as a market-neutral trade, if we believe the stock price or index will stay in a range, or at least not move past certain price levels. The market bias is neither bullish nor bearish, and the expectation is the stock won’t move much at all. Hence, it’s market neutral. For example, think short strangles or iron condors. These market-neutral strategies typically start without a bias, and result in positions that we choose based on price, probability, or potential return vs. risk. 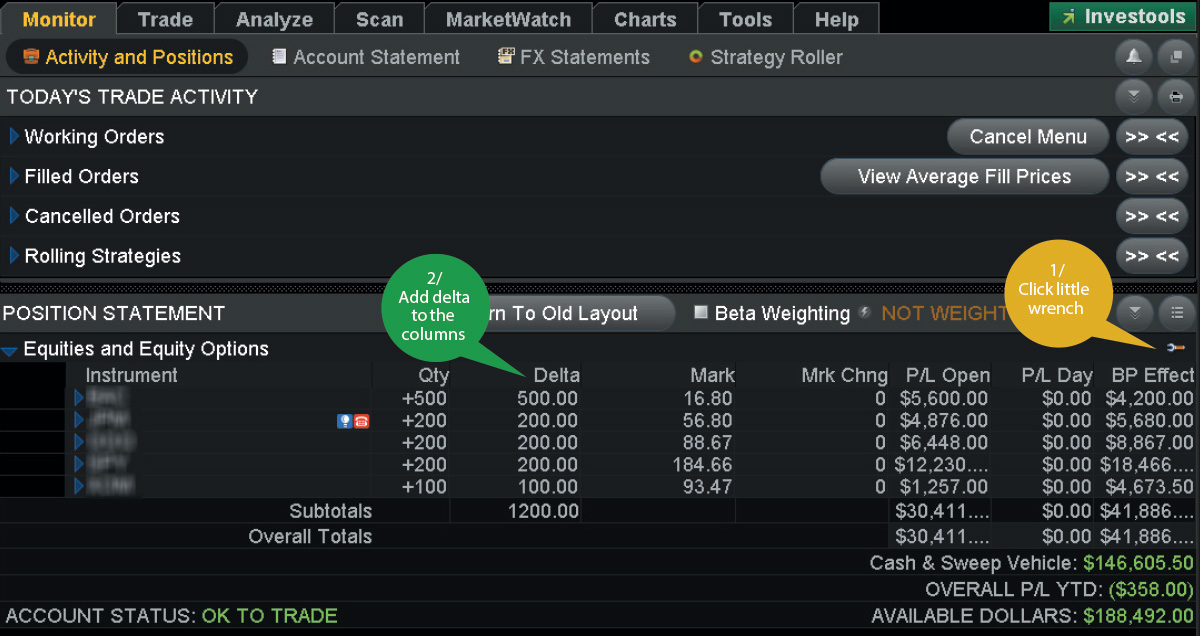 To view the deltas of each position or your entire portfolio in thinkorswim, 1) click the little wrench-looking thingy in the upper right of the Position Statement section of the Monitor page. Then 2) add delta in the menu of options to add to the columns. For illustrative purposes only.

Now, market-neutral strategies often have very low deltas, at least when trades are initiated. How so? A short strangle, for example, composed of a short OTM call, and short OTM put in the same expiration, can have a very low delta, if the call’s and put’s strike prices are roughly the same number of points OTM. The short call has a negative delta, and the short put has a positive delta.

By the way, you can always see the delta of your current positions on the Monitor page of the thinkorswim® platform (see Figure 1). It's one of the columns in the Position Statement section of that page. To add delta, click on the little wrench icon in the upper-right-hand of the Position Statement section, and find delta from the list of available columns.

So, hopefully you now understand the difference between delta neutral and market neutral, but how can you use it? Is delta neutral solely for market makers? No. Retail traders, too, can employ delta-neutralizing strategies in an effort to protect profits and reduce losses. Unlike a market maker who neutralizes delta—i.e., gets the delta of a trade close to zero, on a trade-by-trade basis—retail traders may just want to reduce delta on a losing trade to help defend against further losses, or on a winning trade to potentially capture profits. Let’s see how.

Defend against losses. If the stock drops to 48, the put will likely be losing money, and its delta rises to, say .45. Your strategy now has more delta (directional) risk to it, with the potential to lose a growing amount of money if the stock continues to drop.

Now, you could just buy back the short put, but maybe you think the stock might stop dropping, or even rally a bit. A way to “defend” the short put would be to reduce the higher delta by selling a call against it. If the 50 call has a .35 delta, selling it for 1.20 would generate negative -.35 deltas, and leave you with a short 47/50 strangle with a current delta of positive .10. Selling the call also adds to the credit of the overall strategy, which increases the potential profit to 2.20 (minus transaction costs), and lowers the downside breakeven point to 44.80. Yes, you are adding risk to the position if the stock rallies sharply. But if the stock continues to drop, you could roll the short call to a lower strike to realize even more credit, which would lower the downside breakeven point further.

Capturing profits. On the other hand, let’s say the stock rallies from 50 to 53, and the short 47 put is now profitable with a delta of .15. Rather than adding upside risk by shorting a call to reduce the already-lower delta, you might buy the 48 put with a delta of .20, for example, if it’s trading for less than the credit you took in for selling the 47 put. If you can buy the 48 put for .75, you’d not only reduce your delta from + .15 down to -.05, you’d also have the long 47/48 put vertical on for a net .25 credit (minus transaction costs).

These are two examples of reducing a position’s delta. You can use verticals or other spreads, for example, to reduce delta in a defined risk way. But if you understand the logic of choosing a specific option or spread based not only on how much it neutralizes the delta of a position, but also on how it can potentially enhance or improve the resulting cumulative position, you’ll be able to think more strategically about individual positions, and even your entire portfolio.