Windows 10 Users: A Shiny New Trading App Just For You 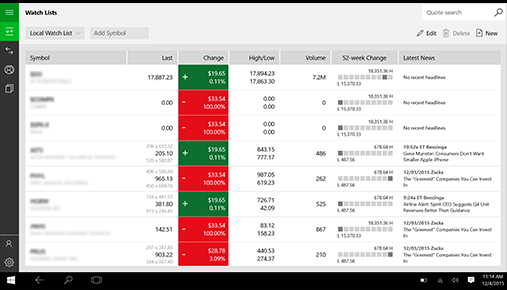 For some time now, the mobile operating system (OS) market is primarily comprised of two behemoths—iOS and Android. For desktop computer users, it’s Mac OS or Windows. Windows however is the only major OS who has hedged their bets on a multi-platform OS—Windows 10. Microsoft released this revolutionary new operating system in July 2015 with the ability to run on multiple platforms, from smartphones and tablets to PCs and even Xbox.

As of January 2016, there are more than 200 million monthly active devices around the world running Windows 10. The tech giant’s ultimate goal is to get Windows 10 running on 1 billion devices in less than three years. To help attain this goal, Microsoft knew that in today’s world, an operating system is nothing without a quality app store. To that end, they sourced leading companies in various industries to create Windows 10 applications. As the industry leader in mobile trading, TD Ameritrade was approached by Microsoft to help revolutionize the Windows 10 space for investors. TD Ameritrade’s suite of mobile products primarily caters to Android and iOS users. “But what about Windows users?” our clients would often ask. The timing was just right for a revolutionary change.

As a sign of constant innovation, TD Ameritrade became the first online brokerage to offer a trading app on Windows 10 within the same year as the new OS release. This app replaced a read-only version built for tablets running Windows 8.1 introduced back in 2013. This new app was a redesign of the existing app and now includes: streaming quotes (figure 1), charts (figure 2), and research and news (figure 3).

This app is currently compatible with tablets and desktopcomputers with Windows 10 OS. Smartphone compatibility is coming soon.

Download the TD Ameritrade Windows 10 app to check out all the new features.