Guilt-Gifting, Black Friday Month, and More: A Holiday Like No Other for Retailers

Forget about cramming into stores on Black Friday; the pandemic has changed that and just about everything we once held dear to holiday traditions. How might these changes affect retailers? 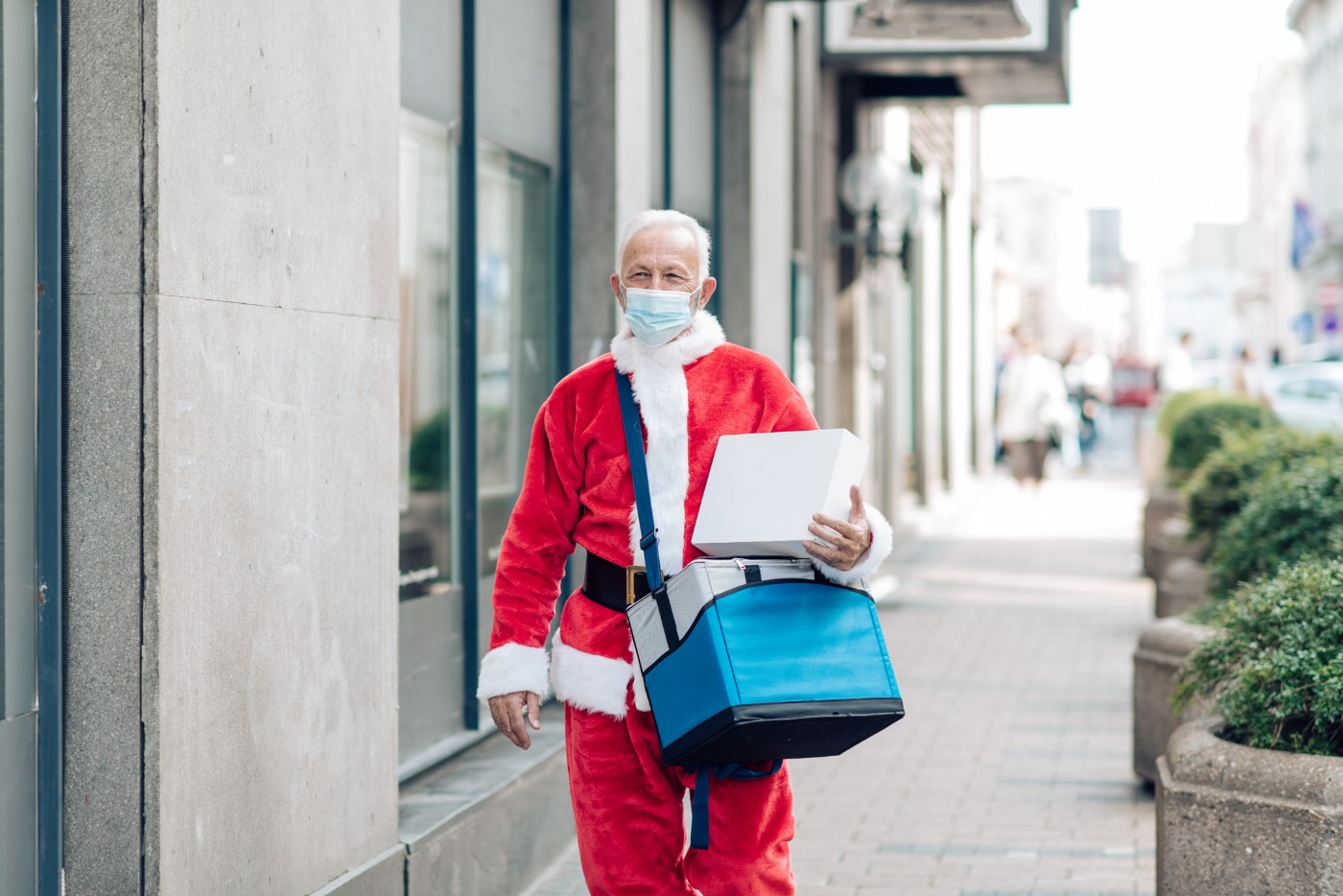 Brace yourselves boys and girls, the holiday shopping and festivities whirlwind, as with most of 2020, will be unlike any other you’ve ever experienced.

The holiday shopping period—usually the most wonderful time of the year for retailers—won’t look or feel the same this year as the COVID-19 pandemic continues to wreak havoc on the U.S.

The buying season—including Black Friday—has already played out differently. Frenzied in-store shopping will likely be nonexistent. Many holiday celebrations and events will be scaled down—or canceled. Even Christmas Day looks to be abnormal.

Retailers: Some Shiny Things and Some Lumps of Coal

The retail industry overall is widely expected to ring up higher sales than last year as consumers redirect their extracurricular dollars to what NPD Group calls “guilt gifting.” But the love—or act of contrition—won’t be shared equally among the sectors.

Retailers such as Walmart (WMT), Target (TGT), and Best Buy (BBY) that knocked sales out of the park this year are widely expected to do more of the same over the holidays. Analysts have cautionary notes out on retailers that include Macy’s (M), Dillard’s (DDS), and Abercrombie and Fitch (ANF), much because of ambiguity tied to the next wave of the pandemic and potential store closings.

No one disagrees that e-commerce sales will likely knock the stars right off the tops of Christmas trees this year. An Accenture survey found 75% of consumers plan to head to the favorite easy chair or the kitchen counter to shop online for holiday gifts this year. That’s up from 65% who said so last year.

Adobe Analytics projects a 33% leap in online holiday sales this year. The assessment is based on the unprecedented momentum since the outbreak, after shutdowns earlier in the year for nonessential retail outlets.

So, yes, Virginia, there will be presents under the tree. But Santa’s not going to let you go beyond the plexiglass sneeze guards to sit on his lap. Holiday street and tree lighting celebrations—typically crowd-packed, sales-driven events—are closed to the public and relegated to scheduled visits that might cost money this year.

The annual Macy’s Thanksgiving Day Parade is still a go. Kind of. No 2.5-mile parade route. No marching bands. No political entourages. No shopping sprees afterward.

Yes to gigantic balloons, dazzling floats, and musical performances, this year by Patti LaBelle and Dolly Parton. But, as Macy’s puts it, the only place to see it all is “from the comfort and safety of your home.”

For everyone who doesn’t live near 34th Street, that’s always been the case. But that crowd-pleasing sense of excitement in one of the most time-honored kick-offs to the holiday frenzy could get lost in real-time streams on your phone or TV screen.

No Busting Down Doors on Black Friday

And forget about that door-busting Black Friday thrill that shoppers—well, some of them—have been looking forward to all year. That’s a no-go. Crowds are a health threat now, and as the number of new COVID-19 cases, hospitalizations, and deaths have surged in recent weeks to fresh records, cities and states across the country are again reining in public gatherings.

With few exceptions, most directives stop short of the stay-at-home mandates in March that forced shopping centers, malls, and entire streets and neighborhoods—those that were home to so-called “non-essential” retailers—to lock the doors. But it still doesn’t bode well for the traditional shopping trimmings of years past.

In-store capacity at most retail stores has been reduced to as little as 25% in many areas. Some parts of the country aren’t allowing them to open at all. Retailers are still bracing for foot traffic, but are at the ready with thermometers, hand sanitizers, masks, and door-counter devices.

The good news might be the end to the controversial “Black Friday head start” shopping on Thanksgiving Day that began about 10 years ago. WMT, TGT, Kohl’s (KSS), BBY, J.C. Penney (JCP) and M will be among the big-league retailers whose stores will finally be dark again on the treasured family holiday this year.

That doesn’t mean their 24/7 retail sites won’t be open. Catering to the shop-when-I-want-where-I-want whims of consumers—exacerbated by the pandemic’s quarantines earlier this year—retailers have stepped up their online shopping “experiences,” if they can actually be called that, for the holidays.

When Is Black Friday Again?

As anyone who shops has probably noticed, “Black Friday” really began in October with Amazon’s (AMZN) ultra spending spree Prime Day and the retailers who promoted themselves along with it. And November might as well have been called “Black Friday Month” with all the midweek and weekend sales that have been advertised regularly.

It should be no surprise then that October retail sales logged a 10.6% year-over-year gain, according to the NRF. The big question now is how much of the holiday spend got pulled into October, putting the typical jump in sales in the very important November–December period in jeopardy.

That helps explain the differential in NRF’s 3.6% to 5.2% higher sales increase for the November–December period. Last year, before the pandemic and the 5,000 store closures this year and spike in the unemployment rate, holiday retail sales swelled by 4%, and over the last five years, the average has been 3.5%.

It would seem inconceivable that during a period of so much strife, consumers would spend more money during the holidays than they did before the outbreak. The prevailing wisdom is that the money not spent on dining out, going to theaters, plays or sporting events, and forgoing travel will be directed toward holiday gift- and self-giving this year.

A Sleigh’s-Eye View from Retail Analysts

As was evident in the sales jumps at Home Depot (HD) and Lowe’s (LOW), for example, driven by home-improvement and gardening projects, coupled with other such high-priced buys as Peloton (PTON) bikes, Tiffany (TIF) T1 rings, and even Bosch refrigerators, those with deep pockets were willing to dig into them.

NPD Group’s Marshal Cohen, chief industry advisor, expects many consumers to binge on themselves and their families this year to deal with the guilt of missing in-person holiday get-togethers this year. Three in 10 holiday shoppers said in a recent survey that was their intention.

“Splurges on both ‘guilt-gifting’ and self-gifting will be significant components of the consumer’s retail therapy during holiday 2020,” Cohen said. “While the emphasis will continue to be on items that are useful to the consumer’s new way of life, the holidays are likely to prompt upgrades to up the ante on many of those practical purchases.”

Jack Kleinhenz, NRF’s chief economist, sees much the same. “Given the pandemic, there is uncertainty about consumers’ willingness to spend, but with the economy improving most have the ability to spend,” he said.

“After all they’ve been through, we think there’s going to be a psychological factor that they owe it to themselves and their families to have a better-than-normal holiday,” he added.

In the aggregate, Kleinhenz sees a V-shaped recovery for retail sales—up in both the month-over-month and year-over-year basis since June. But the store shutdown and stay-at-home orders were punishing to some retailers.

“Not all retailers and categories have rebounded as quickly, including small and mid-sized retailers,” he added.

Something Else to Think About

This year more than ever—including those early years of online shopping and deliveries that sometimes missed the crucial Dec. 25 put-under-the-tree deadline—consumers are ready to give retailers that miss the mark the heave-ho.

Noting the double whammy of waning consumer patience and high-level expectations of last-minute shopping during the holidays, the Accenture survey found that 56% of consumers said they won’t shop at a retailer following “an unsatisfactory delivery experience.”

They were willing to wait in March, April, even into June and July. But now? No way, according to Accenture.

The upshot to investors is to be wary of the pandemic’s impact on consumer spending and watch the trends. If there’s another widespread shutdown, some retailers are going to get hit harder than others. Consumer spending has as much to do with sentiment as it does with how fat wallets are.