Learn about the "positions" to fill as you build your investment portfolio. 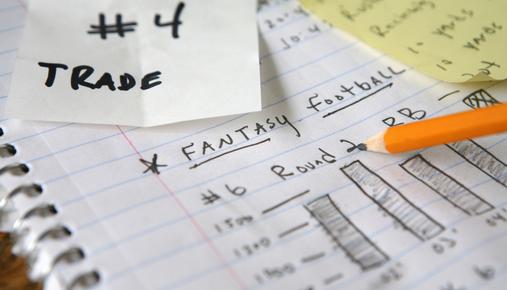 Investing and business news is rife with football-related analogies, from basic “blocking and tackling,” to “crossing the goal line” to “Hail Marys.”

It only makes sense. Business and football are both revered and long-standing national pastimes. Football itself is big business, of course, but so is the fantasy version.

According to the Fantasy Sports Trade Association, these “pretend” games, where individuals build teams with real players from real professional leagues and compete against each other every week, now add up to a $7.2 billion industry.

There are an estimated 59.3 million fantasy sports players in the U.S. and Canada this year, an all-time high and triple the number a decade ago, according to the association.

With another football season just around the corner, millions of Americans will gather in sports bars and basements over nachos and hot wings for their annual fantasy “drafts.”

How many of them take their fantasy football teams more seriously than their investment portfolio? Hard to say. But there are at least a few common denominators in constructing a portfolio or a fantasy team.

As opposed to fantasy games, the money people are saving for retirement, college tuition and the like is very much real. Every investor should be a prudent and thoughtful coach/general manager of their portfolios.

For starters, whether the subject is football or investing, “it takes a whole team,” says JJ Kinahan, chief market strategist at TD Ameritrade. “One good ‘player’ won’t win it for you, and, in fact, one player can cost you.”

That said, the right mix of “talent” is also very important, and investors could consider these “positions” for a portfolio roster:

This position is fundamentally about consistency, leadership and trust. For example, an established company or companies that have grown steadily, or have been generating consistent, if not accelerating, earnings. You want to be reasonably confident in the longer-term viability of these assets; investors typically do not want something too risky, overhyped or expensive that ultimately turns into a flop.

There’s nothing particularly glamorous about these players, but they should move your team forward, reliably, a few yards at a time. We’re talking about solid investments that will do your grunt work through modest yet consistent yields or dividends. Broadcasters sometimes refer to real offensive linemen as “hogs” or “big uglies.” In other words, they’re not necessarily pretty, but they get the job done, and they don’t care about getting headlines.

Think protection and safety (similar to the role of the offensive line). These are investments “that will respond well to volatility and ‘Black Swan’ events,” Kinahan says, adding that this is “not just about protection, but also benefit” for the portfolio (in real football, a good defense can also win games).

This could be a newer, fast-growing investment with large potential upside, but also much more risk. Such a “rookie” may “make a few nice catches, but may also have some turnovers,” Kinahan says. Therefore, you may want to consider allocating relatively small amounts of “playing time” – or, percentage of your portfolio – to these kids. Some emphasis, but not too much, in other words.

Real coaches have a lot going on before, during and after games, and they have to make quick, rational decisions on play calls, player alignments, substitutions and more. As “head coach” of a portfolio, investors should be similarly alert and engaged, Kinahan says. Much like a coach, review your lineup and its performance every quarter, if not more often.

Stock investing involves risk including the possible loss of principal.

Payment of stock dividends is not guaranteed and dividends may be discontinued. The underlying common stock is subject to market and business risks including insolvency.