Sniff Out Inflation: Gauge Sentiment with Gold, CRB, and CPI

The line between “good” and “bad” inflation is a thin one and tough to recognize. We grade the standard inflation measures. 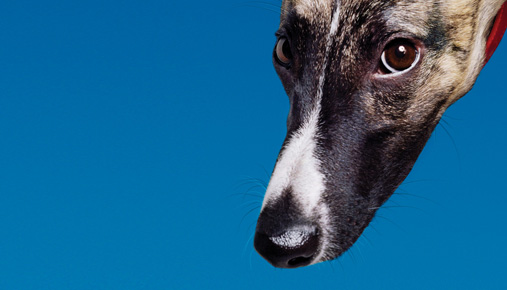 This article first appeared in The Ticker Tape Fall 2012

The line between “good” and “bad” inflation is a thin one and sometimes tough to recognize. Are the old measures still reliable?

Mention the word “inflation” to a group of investors and at least a few will start to squirm. Just the scent of inflation can send investors fleeing from stocks and other asset classes. But while it’s likely you’re going to keep your wits about you, there comes a time when you need to pay attention to real warning signs and take action. The same goes for inflation. Yet, which signs are widely considered reliable?

Here’s a short list, three in fact, of common inflation metrics and the potential value (and limitations) they add as indicators of investor sentiment.

It’s a challenge to use gold as an inflation measure due to market volatility, and the geopolitical backdrop, since the millennium. The metal traded from $32 an ounce in 1971, when President Nixon took the U.S. off the gold standard, to $887 an ounce in 1980. It then fell for the next 15 years, eventually dropping below $300 in 2001. Since then, the 600% rise in gold prices, according to NYMEX data, has been more or less a response to geopolitical concerns, than actual inflation.

Is gold overpriced today? If we deflate the dollar using the price of gold in 1971 compared to today, the dollar is worth less than two cents. In other words, gold is saying that the greenback has lost 98% of its value in the 40 years since the gold standard was abandoned. Not very inflationary.

VERDICT: Gold probably isn’t the best indicator of short-term inflation. But as geopolitical conditions have rattled markets since the millennium, it has become a pretty good indicator of investor sentiment. Investors tend to flee from other asset classes to buy the yellow metal when global political uncertainty persists.

The Thomson Reuters/Jefferies CRB Index® was first calculated by the Commodity Research Bureau (CRB) in 1957, and was originally comprised of 28 commodities. Since then, the basket has changed. Today, 17 commodities make up the index. And therein lies the problem—too much change to be a trusted long-term inflation indicator. So much change over the last 50 years, in fact, that the CRB shows muted action relative to gold (figure 1). For example, crude oil and gold, which now tend to be major movers in the commodity space, were not added to the CRB Index until the early 1980s.

VERDICT: The CRB Index can be a valuable shorter-term inflation and investor sentiment gauge. Rapid increases might alert investors to gathering inflation, and the potential swell of raw-materials costs that often can indicate rising consumer demand and economic strength. 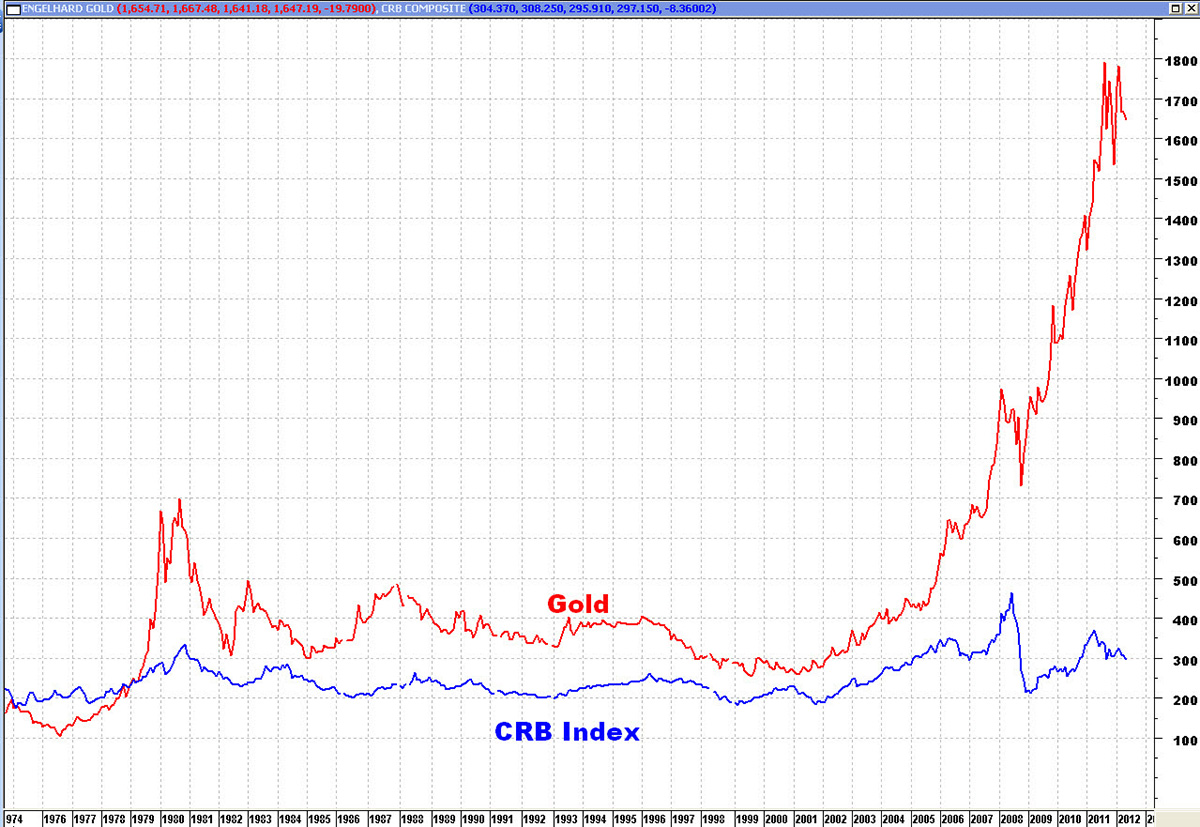 FIGURE 1: Monthly chart comparing gold and the CRB Index between 1974 and 2012. The eventual gap between gold and the CRB reflects the constant change in the “commodities basket,” and potentially, gold’s imperfection as inflation indicator. Data Source: Thomson Reuters. For illustrative purposes only. Past performance does not guarantee future results.

The Bureau of Labor Statistics’ Consumer Price Index (CPI) (figure 2) provides monthly data on changing prices paid by urban consumers for a basket of goods and services. When it falls, inflation pressure subsides, and the potential for a weakening economy increases. When the CPI is rising rapidly, you can get a better outlook for a stronger economy and rising interest rates.

The basket and composition of CPI components have changed a number of times—posing the biggest challenge facing investors and traders who rely on these data. And they’ve tended to under-report true inflation pressure. After all, gold is telling us that a dollar in 1971 is now worth less than two cents. According to the CPI, the dollar has dropped to a value of 18 cents over the same period. That’s a big difference.

VERDICT: CPI can be more valuable as an indicator of the rate of inflationary changes, but is not necessarily an early signal. 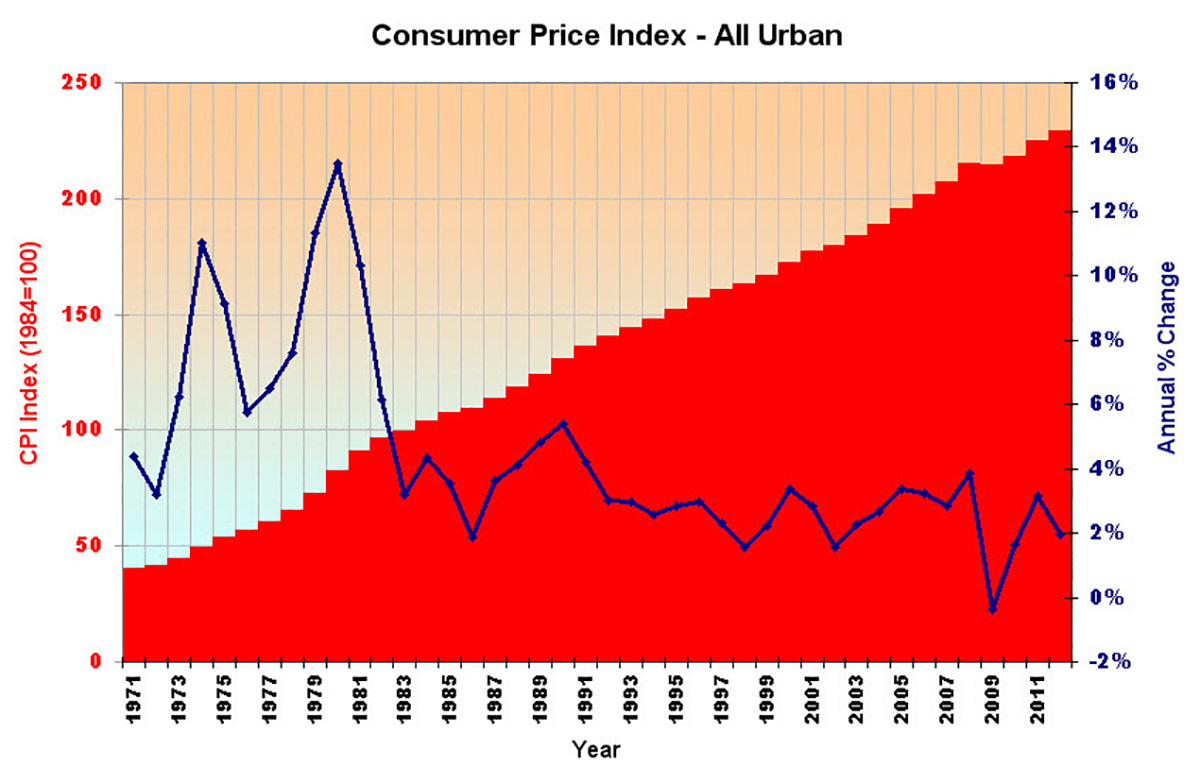 FIGURE 2: The Consumer Price Index (CPI) between 1971, when the US economy was taken off the gold standard, and 2012, showing nominal changes in the index (left-hand axis) and the annual change in percent (right-hand axis). For illustrative purposes only. Past performance does not guarantee future results.

TD Ameritrade, Inc. and all third parties are separate unaffiliated companies, and are not responsible for each other’s services or policies.