Markets are Random, Your Portfolio Shouldn't Be

There's a camp of traders who think a stock's next move is about as predictable as a coin toss. Just take your stock-picking hat off for a moment and focus. 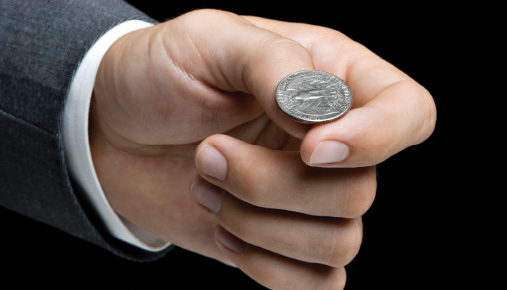 The Price Is Right is the perfect game show for traders. Not only is it cheap entertainment for millions of couch potatoes; it's also an exercise in pure statistics. Essentially, each pricing game leading up to the much-anticipated “Showcase Showdown” relies primarily on the fact that most contestants guess somewhere in the middle on the price of a pack of gum or a new car—what's called a mean in statistical terms.

One “TPiR” favorite—Plinko—is a pricing game based on the principles of “random walk,” which also happens to be a popular school of thought among certain traders. This is the game where the contestant drops a hockey puck-like “chip” down on aboard of nails that are evenly distributed. Each time the chip lands on the top of a nail, the odds are 50/50 that it will fall left or right before it lands on the next nail. Eventually, it hits the bottom. Once the contestant drops the chip, nothing can influence where it will go next except gravity itself, and nobody can predict where it will land. Its path is said to be completely random. Over the course of hundreds of chips dropped, they'll cluster around a mean in a shape that math geeks like to call a bell curve, with 50 % of the chips landing to the left of the curve, and 50% to the right—essentially, a coin-toss. This is the essence of random walk.

It Ain't Plinko, But It's Close

If there was ever a market moment when random-walk diehards get to have their day in the sun, it's right now, because technically—at least for the first 10 years of this century—they've been right. On January 1, 2001, the S&P 500 was sitting at 1320. This year, it's been waffling on either side of 1100. So, it's pretty safe to say that at least the broad market has been random and it really hasn't gone anywhere. That's not to say there haven't been some fantastic bulls and bears in between, but you can't really argue with the math.

Random walkers typically disregard balance sheets and price charts altogether. They assume that because of the market's said randomness, your best guess for where it will be tomorrow is where it is today. Yup, income statements, MACD, and volume are as reliable as a toilet-flushing indicator when it comes to predicting market direction (or so they say).

So, does this mean that all chartists and value investors should just pack up and go home? Not exactly. There are plenty of successful chartists, money managers, and investors who are very good at using predictive tools. But if we're in for another decade like the last one (not saying we are), and you haven't exactly “beat the market,” you might consider adjusting your game plan and stealing a nugget or two from random-walk theory.

What's the Edge on a Coin Toss?

Random-walk theory really borrows from another set of principles known as "efficient market hypothesis" (EMH), which states that market inefficiencies, anomalies, and other “-ies” exist, but they do not persist. In human terms, this means that there are so many millions of market participants that any information that becomes known, which was previously unknown, immediately gets absorbed and reflected into the price of a market. Arbitrageurs close all the pricing gaps, sellers sell what they need to sell, buyers buy what they need to buy, and equilibrium is achieved. Utopia, right?

Now, let's assume for the moment the random-walk crowd is right. If so, the crux of EMH states that if markets are truly efficient, then nobody can actually beat the market because technically, you can't predict its outcome. However, random walkers have given up on the idea that you actually need to know where a market will go next to make money. How? Good old-fashioned sound money management and strategy selection, that's how. But before it starts to sound dreadfully similar to recommending (yawn) a proper diet and exercise to maintain a healthy lifestyle, let's touch on both, and give peace a chance.

Money Management Painting with broad strokes, if random walk assumes a 50/50 chance of being right, half of your trades will be winners, and the other half, losers. The trick is to keep more of the dollars you win than you lose, and to do so time and time again. Here are a couple of tips:

Position sizing (How much do you risk per trade?)

Develop a system for consistently allocating the same amount of risk in every trade. There's no cherry-picking here, and it doesn't matter if you have a better “gut feeling” about the next trade than the last one. Doubling down is a no-no. Stick to the plan. If, for example, you decide to risk 5 % per trade, that's what you risk every time—no matter what your convictions.

Trade management (When do you get out?)

If you've been trading long enough, you've probably heard the tired advice, “Cut your losses short, but let your winners run.” Boring? Yes. But that's pretty much what it boils down to, and there's really no better way to put it. The idea is to create some sort of risk-to-reward scenario with each trade that looks something along the lines of risking $1 to make, well, more than $1—such as 1:2,1:3, and so on—otherwise the whole 50/50 thing really doesn't work. This could mean committing to stopping out of your option trade if you lose $1 or exiting for a profit of $2—whichever comes first. Or, if you're trading stock, it might mean stopping out when the stock drops 2 % or exiting for a profit if it earns 4%. These are oversimplifications, but you get the idea.
If you must take away only one thing from this article (you wouldn't be the first), understand that it's essential to keep your losses in check. Position sizing simply seeks to keep you from losing more than a small piece of your trading capital. Trade management seeks to keep you from losing 100% of the small piece, so you can use it again and again.

Strategy Selection If you're a stock trader, there isn't much selection to be had—you either buy stock or you sell it. But for options traders, it's not that black and white. Is volatility too high? You should probably consider avoiding long calls. Earnings around the corner? Maybe forget about those short puts.

Assuming you've exercised your new and brilliant money management plan, choosing the right options strategy to trade is like accessorizing your outfit before a date. You already look good, but those new jeans will make you look great... (Okay, that was awkward.) The point is that picking a good strategy doesn't innately guarantee success, but it can help to prevent bad things from happening to a good trade.

Now, this is by no means a complete list, but here are a couple of tricks:

Consider defined-risk strategies over those for which the loss is uncertain, or worse, unlimited.

What happens when you're short calls on a stock the day blow-out earnings are announced? What if you're short puts the morning of the next flash crash? Avoid the cowboy mentality. Slapping a hedge on your naked shorts to turn them into short put verticals isn't about being unwilling to take risks, it's about preserving capital. Sure, you might win on your next 10 trades, but when lightning finally strikes, assuming you've exercised good money management, you won't blow up.

Consider strategies where time works for you, not against you.

Time decay is the killer of long strategies, such as buying calls and puts, or buying at- or out-of-the-money vertical spreads. Directional implications aside, strategies with positive time decay are designed to profit as time passes because the position you sell gets cheaper. Markets can go up, down, or remain the same. Long options and at- or out-of-the-money verticals lose in two out of three of those situations, whereas an out-of-the-money short put vertical, for example, can profit in at least two, if not all three situations—so long as the stock settles above the short put strike.

Strategies that follow rule #2 shouldn't break rule #1. Short puts and calls, for example, have positive time decay, but their potential losses are incalculable when things go terribly wrong. Spreads, such as short out-of-the-money verticals, iron condors, and long butterflies not only have defined risk; they can also profit as time passes.

It's important to recognize that there really is no single right or wrong philosophy when it comes to trading the markets. Whether you buy into random-walk theory or not, the reality is that markets do trend, if even for just a little while. That said, if an unpredictable market is 50/50, but you have a tool or system that is designed to increase those odds, then all the more power to you.

The fact is, despite the dismal returns of the broad market over the past 10 years, there are many, many successful technicians and fundamentalists who have built predictive methods that consistently produce outstanding returns. Your truth (and success) lies somewhere between what works for you now and how quickly you adapt when things change. But if you still want the quick answer to where the market will be tomorrow—or 10 years from now—just flip a coin and find out.

Multi-legged options transactions such as spreads, straddles, iron condors, and butterflies will incur contract fees on each leg of the order, which may impact any potential return. Ancillary costs such as commissions, carrying costs, and fees should be evaluated when considering any advanced option strategy. Be aware that assignment on short option strategies could lead to an unwanted long or short position in the underlying security.