Experienced traders don’t just learn how to make a profit, they learn how to take a fall without injury—in other words, manage losses. 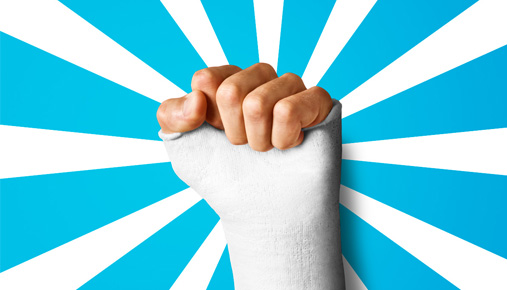 You might not have to bail when the charts turn against you. It’s good to know when a band-aid might be enough to stop the bleeding.

When Should You Adjust?

Somewhere between your entry and your pain threshold (where a stop loss is placed), there may be an opportunity to adjust your trade if you’re convinced the underlying stock will turn back around.

Since every trade is different, under what circumstances would you do so, rather than simply close it out and put on a different one? It depends, but typically, it’s when you still believe your analysis is correct and the trade is simply experiencing a short-term hiccup. You’re down, but not out, so to speak. Provided that hiccup is somewhere between your entry and your predetermined stop loss (active traders typically use a stop order as a basic risk management tool), you can mitigate your risk, take back some of the loss, and buy some time for the trade to turn around.

Let’s start with a common scenario. Suppose stock XYZ is trading at $50 in June. You buy a number of August 50 calls for $4 each (with a stop loss at $2). Over the course of the next week, the stock drifts down to $48, and your calls are now worth about $3 (halfway between your purchase price and your stop loss). What’s the fix? Obviously, you could simply get out, but that would work against your trading plan (and even foster a gambling mentality). On the other hand, there is one alternative that can appease your emotional need to exit and your conviction to stick with your plan: adjust the trade.

When adjusting a losing long-call position, a trader can look to sell something to take back some of the losses incurred. One way is to sell calls against your position at the next higher strike, converting the long calls into vertical spreads. Assuming there is premium to sell at that strike, by doing so, you will 1) help to mitigate, and slow down, further risk; and 2) recoup some of the losses.

If you sell calls against all your longs, then you’ve capped your profit potential to the difference between the strikes, and the total debit you paid, minus transaction costs, of course. One potential workaround for this is to simply not sell as many calls as you own (assuming you’ve bought more than one), which leaves you with potentially greater upside potential on the unhedged calls, and the same loss potential on the stand-alone calls. If you had a stop order in, it would need to be adjusted to match the new positions.

It’s important to remember that there’s nothing magic about adjustments. The reality is you’re not really “fixing” anything. You’re simply taking the trade from what it was when you entered, to what you want it to be now, based on new information. The adjusted trade is essentially a new trade, and the technical and sentiment backdrops should be reassessed, to make sure your original plan is intact. If not, then sometimes the best adjustment is simply to bail out.