Tapping Home Equity? Time to Come Out of Your Man Cave

Consumers are increasingly tapping home equity lines of credit, primarily for renovations, but also for other reasons. 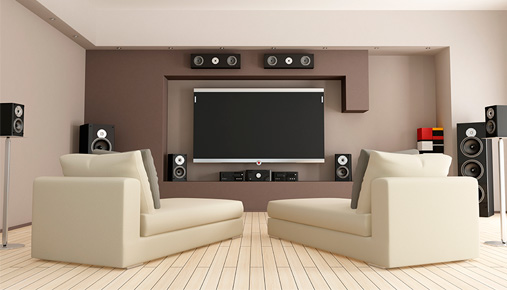 Editor’s note: This is the second of a two-part series on home equity lines of credit. Read the first.

When tapping the value we’ve built in our humble abodes, we tend to think, well, close to home. An upgraded kitchen with granite countertops, a “man cave” big-screen theater room for the basement, and so on.

Yet, there are several other motivating factors, according to a recent TD Bank survey. Remodeling projects ranked as the top reason, at about 50%, for taking out a home equity line of credit (HELOC), according to TD Bank’s inaugural Consumer Borrowing Index survey (see figure 1).

Consumer interest in HELOCs increased over the past year as the U.S. economy improved and home values rose, said Michael Kinane, Head of Mortgage and Consumer Lending Products at TD Bank, an affiliate of TD Ameritrade.

With average interest rates on credit cards above 13% and climbing, there’s an obvious appeal in HELOCs, which are typically pegged at or slightly above the Federal Reserve’s prime rate, currently 3.25% (as with credit cards, HELOC rates “float,” tracking moves in the prime rate). 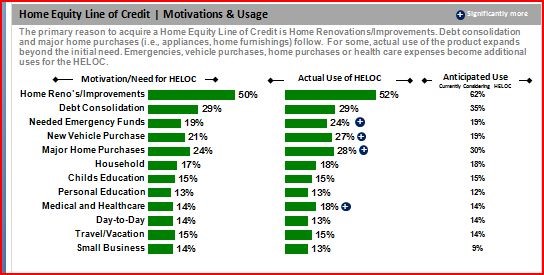 But life, as we all know, tends to throw the occasional curveball or prompt a change of plans, which means many consumers often apply HELOCs toward expenses beyond what they originally intended. According to the TD Bank survey, which reflects input from more than 1,350 U.S. homeowners, HELOC uses that surpassed what borrowers initially planned included:

Whatever your intentions, before diving into a HELOC, it’s important to ask plenty of questions and fully understand any associated fees.

According to TD Bank, nearly half (47%) of the consumers surveyed were paying some form of HELOC fees linked to an annual charge (30%), origination (30%) or prepayment (15%). However, one out of every five homeowners was unsure whether they were paying fees.

Before taking on new debt, consider a few other questions. “What do you need to borrow it for?” Kinane said. “Is it to have a reserve line in case of emergency, or do you have a specific project to complete or debt consolidation?”

The TD Bank survey revealed that 30% of homeowners applied for a HELOC of $100,000 or more, though the average loan secured was about $87,000. Those who shopped around tended to get a higher value – individuals who went with their primary financial institution, but also considered other lenders, secured an average HELOC of $92,000.

If you’re confident about repayment prospects and clear about reasons for taking on the debt, your home can be a valuable asset in many ways. But know what you’re getting into and stay disciplined with your spending, as always.

“The majority of homeowners surveyed feel the repayment requirements are manageable,” Kinane said. “But it is important for consumers thinking about applying, or who currently have a HELOC, to focus on using the funds only on what they really need and prioritizing repayment when the time comes.”

TD Ameritrade and the above named third-parties are separate, unaffiliated companies that are not responsible for each other’s policies and services.

TD Ameritrade, Inc. and TD Bank, N.A. are affiliated through their parent companies.