A Brief History of Stock Market Bubbles & How Investors Can Prepare 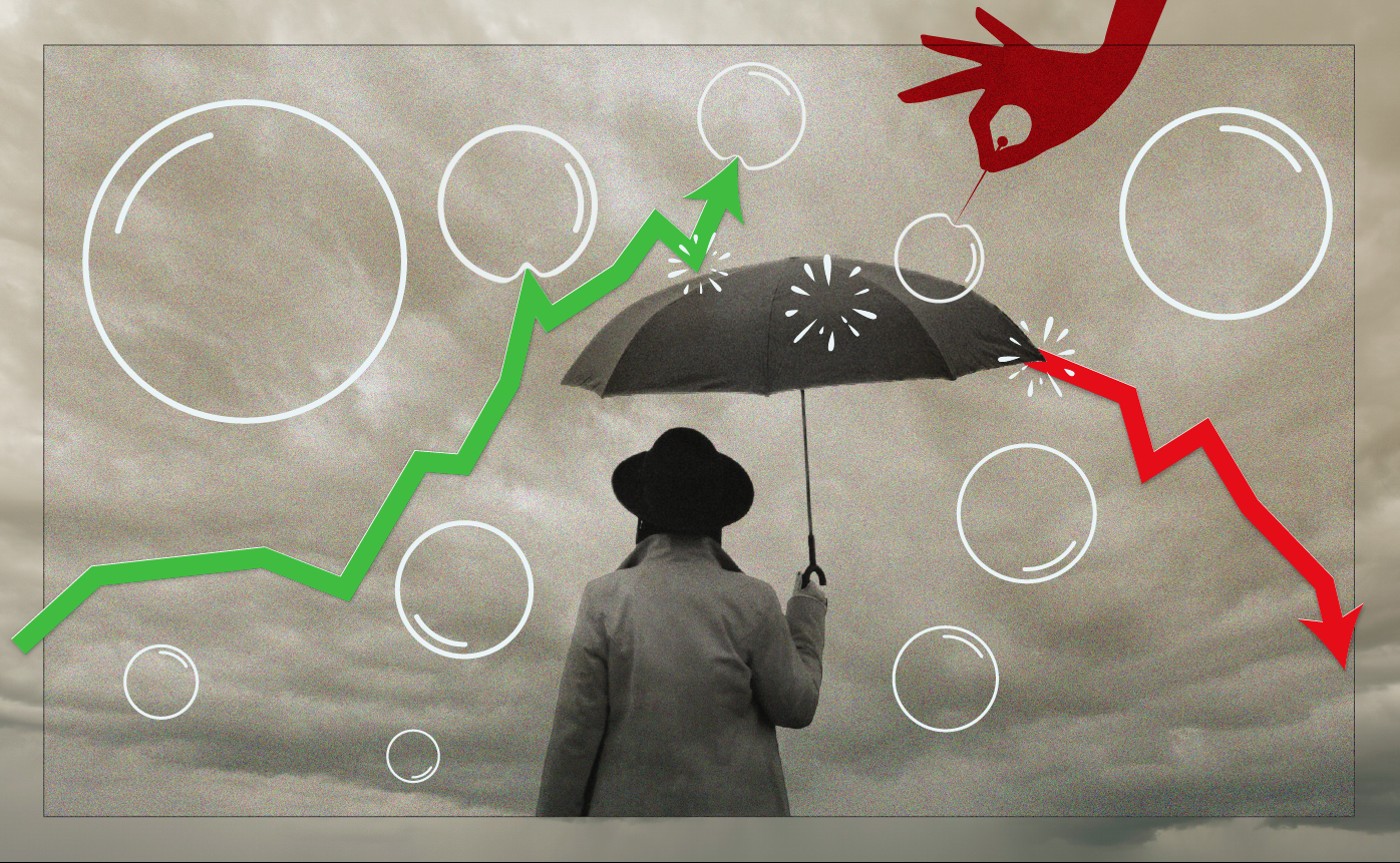 Throughout hundreds of years of market history, stock market bubbles have occasionally been formed, grown, floated about, and then popped. They cover a colorful panoply—houses, dot-com stocks, railway shares, and tulip bulbs, to name a few. Each one is different from the others, but they all share a few very human common denominators: greed, exuberance, fear, excess speculation, etc.

After markets crawl out of the wreckage from the bursting of one bubble or another, the same questions seem to come up, such as: how did we not see that coming?

Stock market bubbles are marked by sharp price appreciation in asset prices over a period, sometimes spanning years, followed by an inevitable crash. Bubbles happen. What is a stock market bubble, how can long-term investors identify a potential bubble, and how can they protect themselves? Here are a few pointers.

Definitions of stock market bubbles and what causes them vary among economists and market professionals. But defined broadly, a market bubble occurs when asset prices climb far beyond what’s justified by underlying fundamentals, such as those that determine whether a business actually generates profits or ever will. Growth expectations become exaggerated, and hype and emotions get overheated. What former Federal Reserve Chairman Alan Greenspan once famously called “irrational exuberance” can take over.

And there’s always a narrative—a general acceptance even—that “it’s different this time.” When the bubble pops, the public comes to realize it wasn’t really all that different.

Here are a few noteworthy examples (check out the infographic below for more).

Soon after tulips were introduced in Europe from present-day Turkey, the plant became a status symbol in Dutch society. Speculators bought tulip bulbs to “flip” later at a profit, and prices surged to the equivalent of tens and hundreds of thousands of dollars in today’s money.

A few years after the end of World War I, the American economy underwent a boom, and the stock market soared amid commercialization of then-new technologies, such as the airplane, automobile, and radio. Borrowed money, aka margin, fueled stock market speculation. But the “Black Tuesday” stock market crash of October 1929 signaled the beginning of the end. Thousands of banks failed, unemployment jumped, and the Great Depression was under way.

Remember the “new economy” where traditional business cycles and recessions no longer applied? Remember the quest for “clicks” and “eyeballs”? Well, it was fun while it lasted. A quarter-century ago, back when the Internet was still nascent territory, dot-coms were going public seemingly every week and tech shares soared, even though many of these companies were burning through piles of money and would never turn a profit. In March 2000, the Nasdaq (COMP) peaked above 5,000, then plunged, losing nearly 80% by late 2002.

What Are the Stages of a Stock Market Bubble?

There are typically five stages to a bubble: displacement, boom, euphoria, profit-taking, and panic. In displacement, a new product or technology gains the attention of more and more investors, or there’s a period of historically low interest rates that drives investors toward assets with potential for greater returns.

As the boom takes hold, prices climb as more investors enter the market, driven by fear of missing out on further gains. That leads to euphoria, where prices skyrocket at a seemingly illogical rate. Profit-taking follows when investors begin to worry that a bubble may indeed be forming, and some begin to sell to protect their profits from what they see as the eminent crash.

That brings on the final phase—panic. This occurs when the masses realize the market is way overvalued and rush to sell off their positions at the same time, leading to a crash or drastic declines in asset prices.

How Long Does It Take for a Bubble Cycle to Play Out?

“The market can stay irrational longer than you can stay solvent” is an oft-cited quote attributed to famous economist John Maynard Keynes. Applying that rationale, it’s clear stock market bubbles can go on for a long time, inflating for many years in some cases as investors reach for reasons why market prices really do represent the value of assets.

For example, some analysts contend we’ve been in a Treasury market bubble for decades, fueled by the Federal Reserve slashing benchmark interest rates to near zero. In recent years, we’ve seen manias of sorts in cryptocurrencies and cannabis stocks.

Despite the long periods it can take to expand a market bubble, the bursting often happens quickly. What makes bubbles so dangerous is we often don’t realize when we’re in one, as investors find ways to convince themselves that a market’s prices are justified. It’s easy to get caught up in emotions and overlook the facts that should be guiding investing decisions.

What Indicators Can Investors Track to Watch for Possible Bubbles Forming?

Equity valuation benchmarks such as price-to-earnings (P/E) ratios can help investors get a handle on whether individual stocks or a broader market are “cheap” or “expensive” relative to history. P/E ratios are based on earnings per share, usually either the actual reported earnings for the previous 12 months or estimated earnings for the next 12.

Technical indicators can also be helpful tools. For instance, many market professionals watch the 200-day simple moving average for clues on whether a longer-term price uptrend remains intact or if prices are coming out of a downtrend. Another chart tool, the Relative Strength Index (RSI), can provide clues as to when a market may be overbought.

Still, technical indicators and valuation metrics can stay at what would seem to be elevated levels for a long time and aren’t foolproof measures to avoid market bubbles.

How Can Long-Term Investors Protect Themselves from Bubbles?

Rebalancing and diversification are the cornerstones of sound, long-term portfolio management, and these principles are just as relevant in helping investors mitigate or minimize the impact of stock market bubbles. The limitation of traditional portfolio ideas, like asset allocation, diversification, and rebalancing, is that a market crash can drag down the entire market. Does the bursting of a bubble only harm the stocks directly in the bubble, or does the burst trigger a broad market crash?

These steps involve assessing your risk tolerance and mapping out long-term financial goals, then setting your allocations accordingly among asset classes—for example, a specific proportion of your portfolio in equities, another piece devoted to Treasuries, muni bonds, corporate bonds, and other fixed income instruments, and a slice in cash.

Stick with such a plan and you establish guideposts and signals for when it might be the right time to take profits on a position that’s appreciated and shift that into another area. Part of the idea is to avoid becoming too exposed to any one asset or asset class or jumping into a bursting bubble thinking you’re buying a dip. A long-term investor might also consider “alternative” assets, such as commodities, that have limited correlation to the broader stock market but have greater and unique risks of their own.

It’s also important to keep emotions in check and avoid snap decisions you may later regret. One handy tool for managing emotions is the stop order, which, placed in advance, will automatically sell a position once it declines by a predetermined percentage. Placing such stop orders can help investors avoid missing an opportunity to sell as a bubble is bursting. Just remember that once triggered, a stop order competes with other incoming orders, so if the market is in a free fall, you might not get filled at or near the stop price.

The Bottom Line on Market Bubbles

Stock market bubbles can feel great on the way up, but they feel degrees worse when they burst. But it’s also worth noting that, on a long enough timeline, many stocks, industries, and asset classes that were previously “bubbled” have made a resurgence—railroads, real estate, and even cryptocurrency, for example. The Nasdaq eventually made new highs after the dot-com era. Although many of those original dot-coms burst into thin air, those that survived—companies like Amazon (AMZN) and Qualcomm (QCOM)—carried on.

With market bubbles, the underlying narrative is based on a long-term trend that valuations get out of whack. The trick is to get the long-term exposure to areas of growth without getting swept up in the bubble.

But not tulips. They’re still below that high set in 1637.

Diversification does not eliminate the risk of experiencing investment losses.

TD Ameritrade and all third parties mentioned are separate and unaffiliated companies, and are not responsible for each other’s policies or services. Inclusion of specific security names in this commentary does not constitute a recommendation from TD Ameritrade to buy, sell, or hold.