Vol for One, One for Vol: Trading Volatility with Options Spreads

Trading stocks over $100 can be tricky under any volatility backdrop. But with the right option spread, any volatility, high or low, will do. 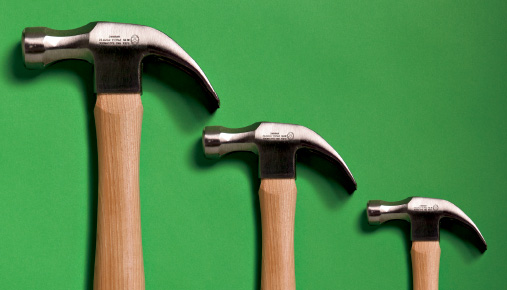 The one constant in the world of options is that nothing's constant. And so goes volatility. But volatility, unlike a stock, doesn't typically move up without looking back. That's because it's “mean reverting,” which in geek-speak means it tends to rise and fall around an average level. Trying to figure out why a stock's implied volatility is high or low, won't do you as much good as simply determining the optimal strategy to take advantage of the volatility hand you're dealt—particularly on high-priced stocks.

Generally speaking, there are three volatility environments you'll need to consider: low, mixed, and high. Here's a few trend-trade strategies designed to meet each of these.

Is the stock you're looking at $20 or $200? If the latter, then a simple long-option strategy may be too pricey, despite low implied volatility. An at-the-money option on the $20 stock might be $2, but on a $200 stock, it could be $20. So what if you think the stock is poised for a nice drop in price, and you want to trade that downside? Perhaps a put backspread might come in handy.

A backspread is comprised of at least one near-money, or out-of-the-money (OTM) options series, and a greater quantity of long position, in a further OTM option series of the same class and expiration cycle. You want to try to put them on for a small credit.

What's the attraction? In addition to likely being less capital-intensive than their long-option counterparts, backspreads give you a two-pronged bet. They generally let you establish a credit in your favor, while getting you poised to take advantage of a rise in volatility. Putting them on for a credit may just provide you with a small profit, if the entire trade expires worthless. Second, you also have more long puts than short on a put backspread, and more long calls than short on a call backspread, so you could profit if the underlying moves sharply beyond your strike prices.

What's the downside? You lose in general if the underlying stock hovers near the long strike, and you lose big if you do nothing, and the stock closes right at your long strike.

Suppose stock XYZ is trading at $225. XYZ has rallied considerably over the past six months. You suspect the uptrend is tired, and the stock may drift over the course of the next two months, or possibly even crash hard. To put on a bearish put backspread, you'd sell, say, two August 220 puts in XYZ, for $11.50 (for a total credit of $2,300). Against that, you could theoretically buy four August $200 puts, for $5.00 each (for a total debit of $2,000). The margin you would need to put up is the difference between the short and long strikes (in this case, net-net, you take in a credit of $300.

An upward move in the stock is pretty straightforward. Your profit maxes out at the $300 you took in as a credit (less commissions and fees).

A downward move in the stock is trickier. If XYZ crashes, you could potentially cash in—again, thanks to owning the extra put. The lower it goes, the better.

Looking at a profit curve of the backspread in Figure 1, notice the change in the difference between the date of entry (red dash line), and trade expiration. As time passes, the potential loss increases, as time decay sets in the long options, with the greatest loss at the long-put strike. 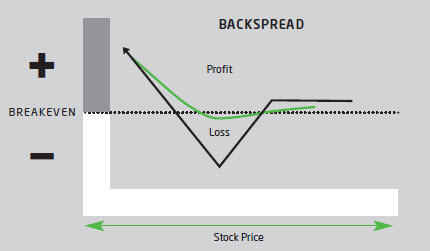 In low-vol environments, particularly on high-priced stocks, the backspread offers an alternative to expensive calls and puts. For illustrative purposes only.

However, the backspread's best performance comes if XYZ collapses immediately. That's because of the two additional long puts, which should benefit if XYZ declines—even if XYZ declines towards our long strike of $200.

When volatility is at heightened levels, but not too extreme, a long vertical spread is a defined-risk strategy designed to profit from a directional move, while also hedging volatility. It typically requires only a small investment—you simply need to cover the debit you incur. 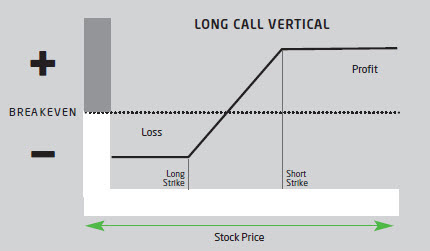 One benefit to a long vertical spread is you're buying and selling volatility, which essentially negates it. For illustrative purposes only.

Vega—the rate at which an option changes when volatility changes—is the culprit for taking money away from you, when volatility collapses in a long position. However, in a long vertical, the reason your negative vega is hedged somewhat, is because the volatility you sell in the short option, negates some of the volatility you're buying in the long option. It doesn't hedge all of it, but it helps. And you could still potentially benefit from a rise in volatility. More importantly, the long-vertical could position you to profit from the underlying stock move.

If FAHN closes anywhere in the middle of the strikes, you win or lose the difference between the intrinsic value of the spread, and the $3.00 debit you paid. So you break even at $233, and max out on profit potential at $240.

Suppose you're still bullish, or mildly bullish, on FAHN, but volatility is too high to purchase a long vertical spread. The risk/reward just isn't there. Instead of buying a call vertical, you sell an out-of-the-money put vertical spread. (Figure 3) Painting broad strokes, a stock can go up, down, or stay put. With stock, or long calls, or long vertical spreads, you lose in two of those three scenarios. But a short out-of-the-money put vertical can make money if the market goes up, stays the same, or even drops a bit—just as long as the stock is above the short strike at expiration. 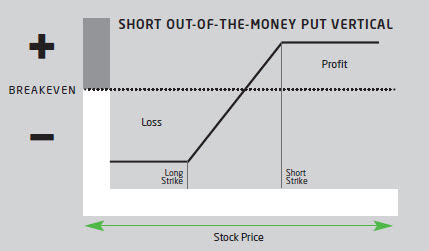 High volatility is a killer of long option strategies. That's why short verticals are designed to profit from a drop in volatility. For illustrative purposes only.

In the case of a short vertical, you're counting on volatility collapsing, which helps your trade. The sooner the volatility premium is pulled out of the options, the sooner you profit. On the other hand, should volatility increase, this would hurt your trade. You only profit if you can buy the spread back cheaper than you sold it for, or it expires worthless.

Obviously, short verticals are similar to long verticals. However, they're a modest bet against volatility. It's a great alternative to its unhedged cousin, the short-naked put. But with a short vertical, you have a built-in stop at your long strike, should the stock go awry.

High-priced stocks don't have to be intimidating, and neither does their volatility. These are just three of the many option spreads designed to mitigate your volatility risk and attempt to capitalize on the prevailing trend—without breaking the bank.

Out of the Money Selling Naked Puts

The spread strategies discussed above and other multiple-leg option strategies can entail substantial transaction costs, including multiple commissions, which may impact any potential return. These are advanced option strategies that often involve greater risk, and more complex risk, than basic options trades.

Transaction costs (commissions and other fees) are important factors and should be considered when evaluating any options trade. For simplicity, the examples above did not include transaction costs. At TD Ameritrade, the standard commission for online equity orders is $9.99, online options orders are $9.99 + $0.75 per contract. Orders placed by other means will have higher transaction costs. Options exercises and assignments will incur a $19.99 commission.