Hedging with synthetic options positions makes sense if you're a market maker. While retail traders don't have as much to gain, they can still learn a lot. 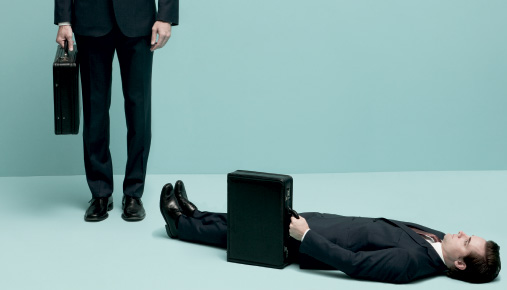 Synthetics aren't sexy. And you're not going to win many friends talking about them at cocktail parties. There's even a good chance you've never used them—and for good reason. For one, they can be complex. And two, they're generally useless to the average retail trader.

So why talk about them at all? Because there are strategies that market makers use, based on synthetic relationships, to hedge positions or protect profits. But you're not a market maker, you say. Doesn't matter. It's important to understand synthetics in order to better understand the positions you're trading. Moreover, under certain circumstances, using techniques that originate in the world of synthetics can sometimes provide some measure of short-term protection or generate a profit, without leaving money on the table. On the other hand, despite their intended purpose, keep in mind that you can still lose money all the same.

When a position is referred to as “synthetic,” it simply means it was put together from at least two other pieces, such as some combination of calls, puts, and stock, to emulate say, a single position in a call, put or stock. Most option strategies have a synthetic equivalent.

For example, to create a synthetic long call position, you could combine a long-put option with long stock. Why? Because during its lifetime a long call position has potentially unlimited reward for less risk than an equivalent stock position. The put in the synthetic can help protect the long stock position in case of a price decline, for a limited period of time without suppressing the stock's unlimited upside potential. Therefore, the put/stock synthetic emulates the risk profile of the call.

Or there's the long-stock synthetic created by combining a short put with a long call, within the same strike and expiration. This position, known as a “combo,” has the same risk profile as a long stock position, because the short premium collected on the short put can help pay for the long premium paid on the call. Since the time value in one option negates time value in the other options you're left with the same risk profile as that of a stock that can fall to zero, and that has unlimited upside potential. That is until the options expire, or you get assigned on the short put anyway.

Fortunately, with synthetics, you only have to deal with three pieces—calls, puts, and stock. Even better, in order to create a synthetic position, you only need to combine two of the three pieces.

Most of the common synthetic strategies are capital intensive since they usually involve either the purchase or sale of stock. And many retail investors may not want to incur the expense of placing them, just to save a few pennies. However, there may come a time when you're in a trade—say, a long put position—that has gone deep in the money, and rather than simply exiting the trade, you might consider from adjusting the position using a strategy that borrows from synthetic relationships to maximize your profit potential. Without getting into the complicated math, consider the following examples of a long put and a long put spread, as well as their timelines.

Locking Profits on a Long Put

Let's first look at how you might use a synthetic position to help protect a profit on a long put hedge on a high-priced stock.

Stock XYZ has just jumped nearly $50 higher on the day, to close at $610. Feeling like the stock is too rich, you buy a May 600 put for $14. With nearly a month to expiration, you're feeling like there's a chance that XYZ could retrace some.

With a potential profit on your hands, what do you do? That depends on how much of that profit you want to keep. You could sell the put, take the money, and run. However, this is where some might consider synthetics in an attempt to pursue a bit more profit.

This is the standard “take your ball and go home.” You bought the put and now you walk away with $27 in profit, or $2,700 per option contract (less commissions and fees).

It may sound crazy, but by buying XYZ stock for $558.00 per share and exercising your put, you can accomplish your goal of locking in your profits from the put purchase, but you're also potentially in a position to make additional money, should the stock rally over the next several days. Now, keep in mind, that in order for this scenario to work, you have to have $55,800 per 100 shares + commission on hand to purchase the shares of stock—a significant capital commitment.

In fact, even if XYZ does not rally, you still bring home more money than if you had simply sold out your put. How?

First, remember that you started your position by purchasing the 600-strike put. This means you have the right to sell XYZ stock at $600 per share. You have this right as long as you own the put. And because the put is an American-style option, you're allowed to exercise it, and hence, sell your stock at $600 per share, at any time during the life of the option.

• You locked in your profit, just as you would have in the first scenario.

• You made more money—to the tune of an extra $100 per contract. Less commissions and fees.

As an aside, if you decide to keep your long-put and long-stock combination through to options expiration, then, for the time being, you're long a 600-strike synthetic call.

Using synthetic positions can also work well for the more budget-conscious trader. In fact, traders on a budget tend to be more sympathetic to techniques that are designed to squeeze that little bit more out of each trade. Here's an alternative example using a long vertical put spread on the same stock and the same dates.

The spread can be picked up for $4.00, or $400 per contract. This is far less than the $1400 needed to buy the 600 put outright. Of course, the drawback with buying a 10-point-wide put spread is that the most the spread can be worth is $10—meaning that the maximum possible profit on this trade would be $6, or $600 (less commissions and fees), per contract.

Nevertheless, suppose you bought the 600/590 put spread for $4.00. Let's fast forward to May 14. With the stock below $560 per share, you have, in all likelihood, made some money. However let's take a closer look at the option chain to see what you might be able to do to maximize profits.

Once again, you see that XYZ is trading at a level of $558.00. However, rather than being long the 600 strike puts, this time you're long the 600/590 put spread. You now have several scenarios to consider.

SCENARIO 1: Do nothing, and carry the position to expiration

This decision involves the least amount of work. You do nothing, and provided that the stock remains below $590 at option expiration, your long 600 puts will likely be assigned, making you a buyer of 100 shares of XYZ at $590 per share. But now you can exercise your 600 strike put and sell XYZ stock at $600 per share.

Of course, your short 590 puts are deep in the money and could be assigned at any time prior to expiration, thereby obligating you to buy 100 shares of XYZ stock for $590 per share. The net result is you walk away with $10, or $1,000, per contract. Since you initially paid $4 for the spread, this would give you a net profit of $6, or $600, per spread (less commissions, contract and exercise/assignment fees).

The good news? This scenario could position you for maximum profit on the trade. The bad news? There's no way to guarantee the stock will remain below $590 to expiration. Also, if you are assigned on the 590 put, you need to have funds on hand to purchase the 100 shares at $590 per share.

SCENARIO 2: Sell out the put spread

You can sell the put spread, close out the trade, and take your profits. As you may have learned in a basic options class, there's nothing wrong with taking a profit. One quick glance at the option chain shows you that you can sell the spread at a price of $8.50. Since you paid $4.00 for the spread, this would allow you to lock in a net profit of $4.50, or $450, per contract (less commissions and fees). You would have more than doubled your initial investment. The only thing better than locking in a profit would be a bigger profit. Interested?

This is what's known in the option world as being “long the box.” The difference in strikes is $10. Therefore, the relationship you see is referred to as a 10-point box. The other way to think of the long box is as synthetic long stock at the lower strike (long 590 call + short 590 put) and synthetic short stock at the higher strike (long 600 put + short 600 call). The beauty of the 10-point box is that barring unusual circumstances, it's worth $10. More importantly, that value doesn't change.

If you're having trouble remembering how to construct the box, it may be simpler to remember that given any two option strikes, buying the call spread and buying the put spread, equals buying the box.

So, to wrap up, you paid $4.00 for the put spread, and 20 cents for the call spread. Therefore, you paid a total of $4.20 for a 10-point box. Since you know that the 10-point box has to be worth $10 at expiration, using this synthetic relationship, you're able to take a profit of $5.80, or $580 per spread by selling both the call and the put spread on the day of expiration.. This is a whole $130 per contract more, than if you had simply sold your existing put spread. So, what are the risks of the box? In short, pin risk, which is when the stock settles right at the strike price at expiration first, in which case, you could be unwillingly assigned an unhedged stock position.

Synthetics aren't just for “mathletes,” or for sophisticated option professionals. These relationships represent position-management techniques are designed to help take back some of the money that others may leave on the table.

Spreads and other multiple-leg options strategies can entail substantial transaction costs, including multiple commissions, which may impact any potential return. These are advanced options strategies and often involve greater risk, and more complex risk, than basic options trades.