Trading is (Not) Gambling: Why the Naysayers are Wrong

The principles of successful trading are also rooted in the professional side of the card table rather than pure luck. The trick isn’t just knowing when to hold 'em, or fold 'em, but why. 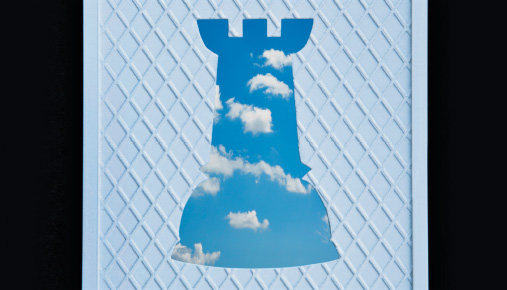 Every cliché has a kernel of truth—like an apple a day keeps the doctor away. Sure, healthy diets make sense. Likewise, the early bird gets the worm. Okay, ambitious birds seem to have pretty happy songs. But there’s another cliché—trading options is gambling—that you might hear from those skeptical of leveraging puts and calls. When people think of gambling, they think of big wins and losses depending on a single roll of the dice or the next magic card. And over the years, we’ve heard plenty of stories about derivatives traders who’ve made piles of money seemingly overnight, or who’ve had catastrophic wipeouts.

Naturally, jackpot-hunting isn’t a great way to manage your trading bankroll. To a less-seasoned trader, options trading can sometimes feel like gambling, with the cliché hovering overhead. But here’s the deal. To serious traders (and investors, too), gambling and trading can be similar in ways that aren’t so scary. And in the long run, that overlap can be informative and even helpful. Going a step further, many traders know there’s a critical ingredient that often separates successful options strategists from the rest of the pack. So let’s challenge the cliché to help you get smarter when options are in the cards.

A Little Can Go a Long Way

If you’re the type of poker player who raises that handsome suited ace/jack pre-flop and shoves your flush draw on the turn with your last $5,000, chances are you’re going to lose. Fast. How could you have avoided that? Snap. By making smaller bets to preserve your stack (remember the cardinal rule in both worlds: buy low, sell high).

The same is true in options trading. If you have a $5,000 account and are trading a particular strategy with defined risk—like a vertical spread, for example, where you can’t lose more than a certain amount no matter what—you can choose how many verticals you trade and preserve a certain amount of control. If the vertical has a max possible loss of $100, one of them can hurt—no one likes to lose $100—but it won’t be fatal. You’ll still have $4,900 left (minus transaction costs, of course). But if you do 50 of them and the trade has its max loss, then you’ll lose the entire $5,000 and find yourself begging strangers for bus fare home. It seems obvious, but let’s say it anyway: to avoid big, sudden, and/or unexpected losses in both options trading and gambling, risk an amount suitable to the inherent risk of the investment and, not to mention, an amount you can afford to lose.

Hope is Not a Strategy

Options prices, too, are based on probabilities. Look at the prices of out-of-the-money (OTM) put or call options. In the same expiration, each further OTM option is less expensive than the previous one. For example, with a stock at $100, the March 115 call will have a lower price than the March 110 call. Why? Stocks usually have smaller price changes more often than larger price changes. So the stock has a higher probability of reaching a closer price ($110) than one further away ($115). Now, if the price of the 110 call is $0.75, and the 115 call is $0.25, and the stock closes at $120 at expiration, the 110 call will be worth $10, and the 115 will be worth $5, minus transaction costs. But the probability of the stock hitting $120 is lower than it is for $110 or $115. Yes, the potential payout can be big, but the probability is typically low.

Conveniently, you can use the thinkorswim® platform from TD Ameritrade to review a trade’s probability of success. For single options, click the Trade tab and load up the “Probability OTM” column. (See Figure 1 below)

You can see the likelihood an option will be out of the money at expiration on the Trade Page of thinkorswim® by selecting “Probability OTM" in the Layout in the Option Chain. For illustrative purposes only.

You’ll see the probability of an option being out of the money at expiration, and that can help you decide whether you want to buy or sell. For options spreads, click the Analyze tab in thinkorswim and refer to Figure 2 below. 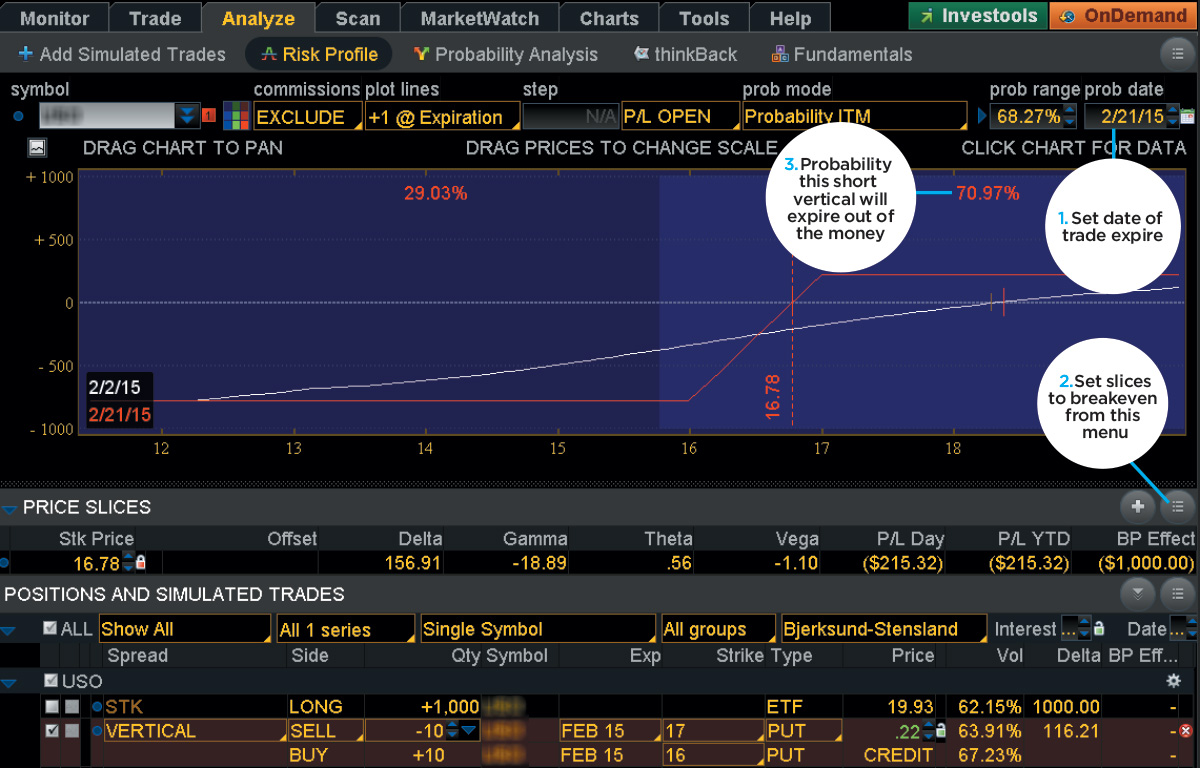 No matter the trade, you can look to thinkorswim® to find the probability of a trade working out. For this short put vertical, it’s nearly 71%. For illustrative purposes only.

1. Go to the Analyze page and create a simulated position of any strategy your heart desires.

2. Look at the Risk Profile page. Set the “prob date” in the upper right-hand corner to the option’s expiration date.

3. Then click on the menu on the far right-hand side and choose “Set Slices” to “Break Even.” The probabilities of the stock being above and below the strategy’s breakeven points will be on the Risk Profile.

The probabilities just mentioned are based on what’s called a high number of occurrences. For example, the probability of rolling 7 with two dice is 1/6, or about 16.67%. But you could roll the dice 10 times and not once get the number 7. There’s about a 15% probability of that happening. But if you roll the dice 100 times, you’ll start to see 7 about 1/6 of the time. If you roll 1,000 times, 7 will get even closer to 1/6.

In trading, you can have a strategy that has a 90% probability of making money. And it can still be a loser, because the market can make a big move in the “wrong” direction for the strategy. And even though that big move isn’t very probable, it’s still possible. Just like you’re not likely to hit the number 7 in 10 rolls of the dice.

This takes us back to the start: be careful not to risk all your money on a single trade, no matter how high its probability of profit. Allocate but a portion of your account to that trade, and a portion to another trade also with a high probability. Then another and another. Think of it as “diversifying your probability.” And don’t think of this as over-trading. You’re not buying and selling constantly. This is about putting on new positions in small quantities over time.

This is where trading is less like gambling and more like chess. You use a gaming mentality to calculate odds and probabilities through the lens of thoughtful, tested strategies. Your trading experience too will naturally shape your analyses over time.

Finally and most importantly, trading and gambling are different. When you gamble, you often throw money at a wager. You play your emotions. Your hunches. Gambling is often crazy wild play. No plan, no strategy, and often no profit.

Trading options requires education and forethought. And these instruments often have more flexibility. If you’re bullish on a stock, you could put on a trade that would make money if the stock does indeed go up, like buying the shares themselves. Or, you could do a trade that would make money if the stock goes up, stays the same, or doesn’t drop too much, like an out-of-the-money short put. Both are bullish trades, but they have different probabilities and payouts. The long stock makes money only if the stock price goes higher. The short put makes money so long as the stock stays above the put’s strike’s expiration price. A seasoned trader can choose which options strategy best matches an earnings outlook for a given stock.

So, next time someone tells you trading options is like gambling, take them to school. And urge them to know their poker odds while you’re at it—the flush being roughly 2:1 with two cards to come, and nearly 5:1 with one card to come. If they’re holding the nut flush on the river, naturally they’re golden.

Out of the Money Short Puts spread Vertical Spread

Probability analysis results are theoretical in nature, not guaranteed, and do not reflect any degree of certainty of an event occurring. Multiple-leg option strategies can entail substantial transaction costs, including multiple commissions, which may impact any potential return. These are advanced option strategies and often involve greater risk, and more complex risk, than basic options trades.