When will a stock trend end? There are a few stock chart indicators that make spotting trend reversal warning signs a little easier. 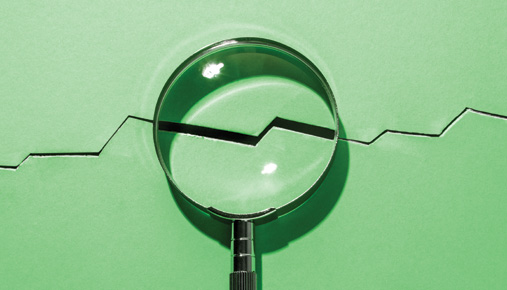 Long before a hurricane ever hits land, there’s fair warning it’s on the way via satellite radar and forecasting programs. If you’re a trader who monitors chart and technical indicators, you can in some sense become a “market weatherman” —tuning into market signals and alerts that better prepare you for what may be on the horizon. So how do you recognize when a bull might be breaking down? Stock charts can offer clues. Let’s zoom in on three warning signs.

The study of charting is rooted in three major premises: market action discounts all known news; stock prices move in trends, and history repeats itself. At the heart of these tenets is price. And many technical traders will tell you stock price is king. After all, the goal is to buy low and sell high, right? Yet, how do we analyze price? We consider the trend—up, down, or sideways. It’s fairly easy to spot a trend on a chart (though the analysis is a bit more tricky). It’s all about looking at the right pictures and connecting the right dots.

Technically, an uptrend is a series of higher price highs and higher price lows. As long as that pattern continues, a stock’s uptrend is intact. Looking at Figure 1, you can connect the dots and draw a rising bull trendline along the price lows from late November to June when the chart peaked. 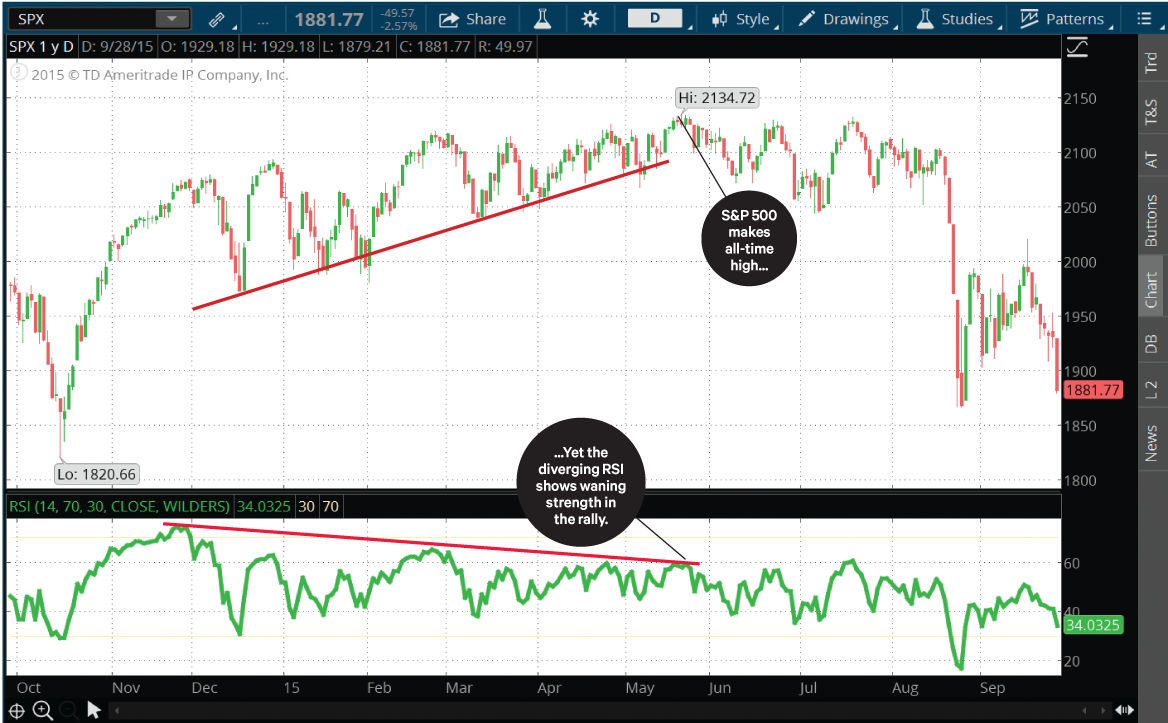 As the S&P 500 hits an all-time high in May 2015, the RSI indicator revealed a bearish divergence, or non-confirmation, at the new high. In late May, the RSI hit 59% as the SPX made new price highs—well below the 75% level registered in November 2014—indicating that bullish momentum was fading. Source: thinkorswim from TD Ameritrade. For illustrative purposes only.

The lower peaks become support for the market or important swing lows. These same patterns can be applied for any time frame—i.e., hourly charts for the more active trader; weekly or monthly charts for the longer-term investor; and so on.

Just like hemlines rise and fall with fashion trends, technical indicators come and go. The Relative Strength Index (RSI) below the price chart in Figure 1 has proved popular over time. Originally developed in the late 1970s by J. Welles Wilder, Jr., the RSI is still widely used today, as it offers traders a quick-read cheat sheet on the strength of the underlying market momentum. If a stock is climbing, a strengthening or rising RSI line may confirm a price trend. But if the RSI climbs above the 70 line that is considered “overbought” territory, that becomes a warning signal that a “top” could be near. Like a weatherman’s tracking devices, the RSI can potentially be an early-warning system. For a declining stock, an RSI reading that falls below 30 is generally considered “oversold,” and suggests price may soon bottom out. Not all tropical storms turn into hurricanes. And not all overbought markets turn into bears. Consider the concept of divergence—when an indicator fails to confirm price action—as a strong alert or red flag warning for a market storm that may be brewing.

Warning signal: Beware once a swing-low support point is violated. The trend has been compromised and may be starting to break down. Stay alert and consider using stop-loss points, as a correction may be on the way.

The principle of confirmation is widely used as trading strategies are developing. If one indicator flashes a buy signal, that’s a start. If three indicators confirm that positive signal, a high-odds trade may be in the works. On the flip side, divergence can be an early alert that a trend is breaking down, such as in Figure 1 above, when RSI diverged from the market making all-time highs.

Warning signal: When a stock price hits a new high, but the RSI doesn’t confirm that with a new high momentum reading, be careful. It could be warning that market turmoil is coming.

Volume, or the number of stock shares traded each day, is a third avenue by which to gauge a trend’s strength or weakness. Think of volume as the fuel behind a market’s move. Do you have a full tank and your engine is raring to go? Or is your “empty” light flashing and you’re running on fumes?

Newton’s first law of motion states that an object in motion will stay in motion unless acted upon by an unbalanced force. Coming back to confirmation, typically a stock’s healthy uptrend will be accompanied by rising volume on up days, or a bullish confirmation signal. Contracting volume on down days during an uptrend is considered normal.

Be on the lookout for an exception to the rule. A stock rising on light volume signals an uptrend may be losing steam. When volume increases and price goes down, that’s often a sign the trend is breaking down.

To organize your thoughts, monitor raw volume numbers shown in daily bars below the stock price charts. Or use an indicator that smooths out the data and can also signal divergences, such as on-balance volume.

Like volume, On Balance Volume (OBV) is a momentum indicator. However, it more or less calculates the difference between two volume periods of a stock. When the stock settles higher than a previous day’s close, the day’s volume counts it as up volume. But, when a stock closes lower, the day’s volume chalks it up as down volume. A rising OBV line is often confirmation of an uptrend. If a stock price gains, but is not confirmed by an increase in OBV, a potential divergence may be in the works. An OBV moving sideways can indicate a neutral market.

Warning signal: When rising prices aren’t accompanied by rising volume, this is often one more sign that an uptrend may be breaking down, such as in Figure 2. 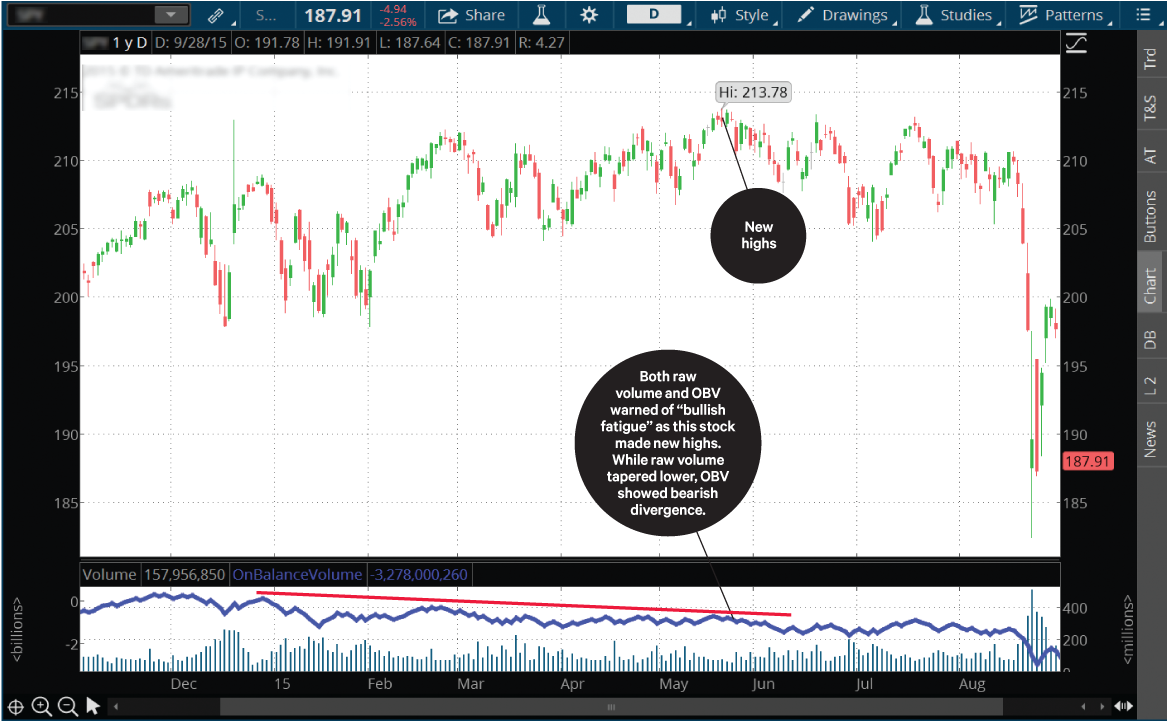 As this stock hit new highs, lackluster volume bars below the price chart revealed a lack of accumulation going into those highs—a “red flag” alert. Further, the on-balance volume indicator (OBV) revealed a bearish divergence compared to November of the prior year. Weak volume warned that the bulls were losing control of the trend. Source: thinkorswim from TD Ameritrade. For illustrative purposes only.

Consider market action in the first two quarters of 2015. The S&P 500 had shifted into a large consolidative range when the Fed became hawkish. The first hiccup was the Greek crisis, and soon after concerns about China reverberated through global markets. This kind of pattern often precedes a correction. Naturally, Wall Street doesn’t like uncertainty. And while headlines are not necessarily reflected in underlying fundamentals, news reports can dramatically impact the charts.

Chart reading relies on the premise that markets discount all known information. As the saying goes, “it’s all in the charts.” Bull markets climb a so-called “wall of worry”— lots of uncertainty and potential “bad” news, but prices keep climbing. In the end, how a market reacts to news may be more important than the news itself. If a market shrugs off bad news and keeps rallying, that may be a sign of a strong trend. Does a market sell off or fail to advance on good news? That could signal that a bull market is getting tired.

Once you decide a trend change is near, you may consider a defined-risk option strategy based on your outlook and expected scenario.

Get your finger in the air and study the wind. Once you learn to read market signals, you might glean a bit more about the kind of potential market storms headed your way. Whether it happens or not, observing price action, divergences, and volume can help you batten down the hatches long before a correction comes to shore.

Indicator Iron Condors Out of the Money Trends Vertical Spread