It's About Time: Range-Trading with the Calendar Spread

We know stocks move up and down. But much of the time, they're range-bound. The calendar spread takes advantage of that at a fraction of the stock price. 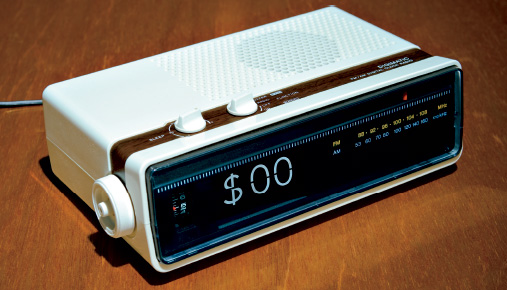 Imagine, for a moment, you could periodically collect option premiums such as a covered call trade, but at a fraction of the stock risk. That's precisely the function of a calendar spread. It's designed to profit on something we all count on—the passage of time.

Calendar spreads can be created using any two options of the same stock, strike and type (both calls or both puts), but of differing expirations. As an example, consider XYZ stock currently trading for $100 per share. If we buy one December 100 call for $2.50 and sell one November 100 call at $1.50, we have bought the December/November 100 Call calendar spread in XYZ for a $1 debit.

This is a trade using equity options, which typically implies American exercise style. This means the December option fully contains the November option. For this reason, if you paid $1 for the package, your maximum risk on the trade is typically limited to that amount.

The maximum reward and breakeven levels of a calendar spread are contingent on the time value inherent in the options. Those calculations are best done with the help of an option-pricing model. The thinkorswim platform gives you a graphical representation of how your trade may pan out using current market parameters.

Want to see what your trade could do if the stock price or volatility levels changed? Our platform lets you run through just about any what-if scenario you can imagine. 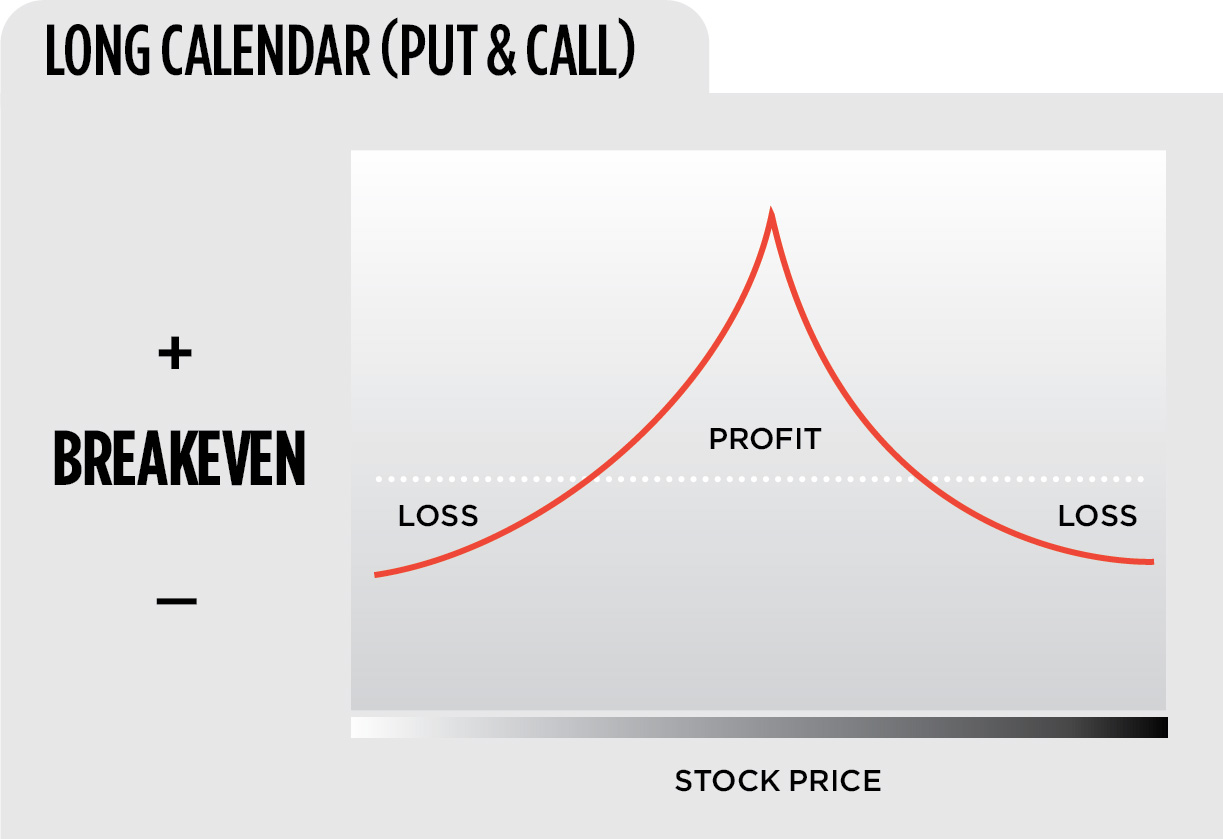 The calendar spread will profit when the underlying stock  settles within a certain range at the expiration of the short leg, assuming volatility doesn't decline significantly.

We don't want to make this a discussion about Greeks, but it helps to know what makes this trade tick. If both options are near or at-the-money, the difference in delta between the long and short options is likely to be small, or delta neutral (meaning, at that moment, they pose no directional risk). However, as the options move significantly in or out of the money, the deltas can pile up and work against you.

The good news is near-term options have greater theta (a measure of time decay sensitivity) than longer-term options, so provided your stock remains in a trading range, you may expect to collect a small amount of money on this trade due to time decay working in your favor. This time decay element, similar to that of the covered call position, represents how you typically expect to make your money.

Then there's volatility to consider. Vega measures an option's sensitivity to changes in implied volatility. Calendar spreads have positive vega—meaning they're helped by an overall increase in volatility. But should overall volatility drop, so goes your premiums—and your trade.

Things to Think About

If you're thinking about trading calendars, here are a few things to consider.

1) Pick a stock that is range-bound, but not comatose. You typically want to trade stocks that trade in a decent range, but not a flat-liner. Without some sort of volatility, there's little premium to sell.

3) Decide between calls or puts. While call-and-put calendar spreads are synthetic equivalents (i.e. they accomplish the same thing), ideally you want to stick with the spread that holds the out-of-the-money options. By doing so, you are typically exposed to tighter bid-ask spreads, and as an added benefit, you minimize the likelihood (and nuisance) of early assignment.

4) Beware of trading “skew.” Buying lower implied volatility levels in one month and selling higher levels in another month doesn't always accomplish what retail traders think. In fact, it typically makes your trade harder to manage. So, if you're just starting to trade calendars, you may want to steer clear of skew for now.

5) Avoid weekly options. This is not to say that you won't ever trade “weeklys” in this strategy, but options move extremely fast during the last week of their life. If you're just starting to trade calendars, try to sell an option with at least two to four weeks to expiration, and buy the next month or further out. As you get your bearings, then start to experiment with different bounds.

6) Be ready to act on expiration week. While calendar spreads are trades in which time decay typically works in your favor, the water can get a bit cloudy during expiration week. Sometimes, the near-term option has decayed so much the incremental benefit of holding the trade one more day is outweighed by the far greater exposure in the higher-priced, longer-term option. You may have a position in which there is no more time decay (reward) for you to gather. Any time you're in a trade where there's no more reward, but plenty of risk, that usually represents a good point to close the trade out.

When it comes to calendar spreads, there are moments that seem too good to be true. Such is the case sometimes when it appears you can enter one for a credit. This is most likely to happen when you're looking to trade calendars on European-settled indexes such as the NDX, or on instruments with multiple underlying products such as the VIX.

The moral here is if something can trade for a credit, and if you have no idea how large that credit can get, then you cannot get a firm grasp on your maximum risk. That said, if you try to trade calendar spreads on index products, your short options will be considered unhedged (naked) for margin purposes. Trade them at your own peril.

When trading equity options, calendar spreads can provide the opportunity to collect time decay for a fraction of the overall risk of a covered call position. In fact, while your maximum risk is typically limited to the debit paid for the trade, a calendar will only rarely achieve maximum loss, due to the fact that the front month option loses all of its time value, while the longer-term option tends to still hold some residual value. This usually means even when they go bad, calendar spreads still have a residual roll value you can salvage.

Multiple-leg options strategies such as those discussed in this article can entail substantial transaction costs, including multiple commissions, which may impact any potential return. Be sure to understand all risks involved with each strategy, including commission costs, before attempting to place any trade. Be aware that assignment on short option strategies discussed in this article could lead to unwanted long or short positions on the underlying security.