In a low-vol environment, pairs trades may offer unexpected opportunities. Here's how to choose among many combinations of bullish and bearish positions. 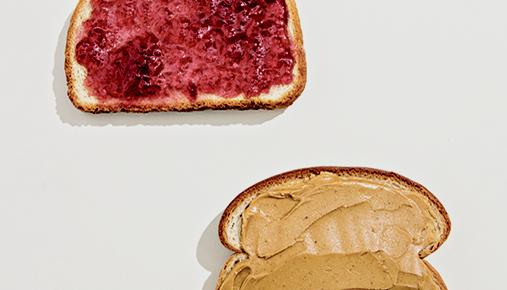 Where would we be without the ham-and-cheese sandwich? Or chicken noodle soup? Would peanut butter even exist without jelly? Sure, you can eat any of those things without the other while sitting at your desk trading. But if staring long and hard at an individual stock or index to figure out a strategy is yesterday’s lunch, maybe that stock or index could be paired with another to make a delicious new strategy. So, what’s a “pair”? Think of pairs trading as a bullish position in one stock or index, combined with a bearish position in another. You might consider a pairs trade for the same reason you eat peanut butter with jelly. The constituent parts are fine on their own. But when you combine them, things can get interesting.

For pairs trading to make any sense, you need to understand a few concepts.

When you look at two stocks or indices to comprise a pair, a positive 0.60 or higher correlation is a good place to start. Higher than that is good. Lower than that, and the relationship between the two stocks can become weak. And when the long stock in the pair goes down and the short stock in the pair either goes up or doesn’t drop, it can lead to unappetizing surprises.

To find correlation values, go to the Charts page on the thinkorswim® platform by TD Ameritrade. Then:

1. Type in “SPX–NDX” in the symbol field as an example of a pairs chart.

2. Click on the Studies button, then Add Study, then All Studies, then click on “O–P” in the list of studies and select PairCorrelation. It’ll load up the correlation between the two symbols that you entered, in this case the SPX and NDX.

3. Enter any two symbols in the same way “ABCD–XYZ” and you can see the correlation between them. (See Figure 1.) 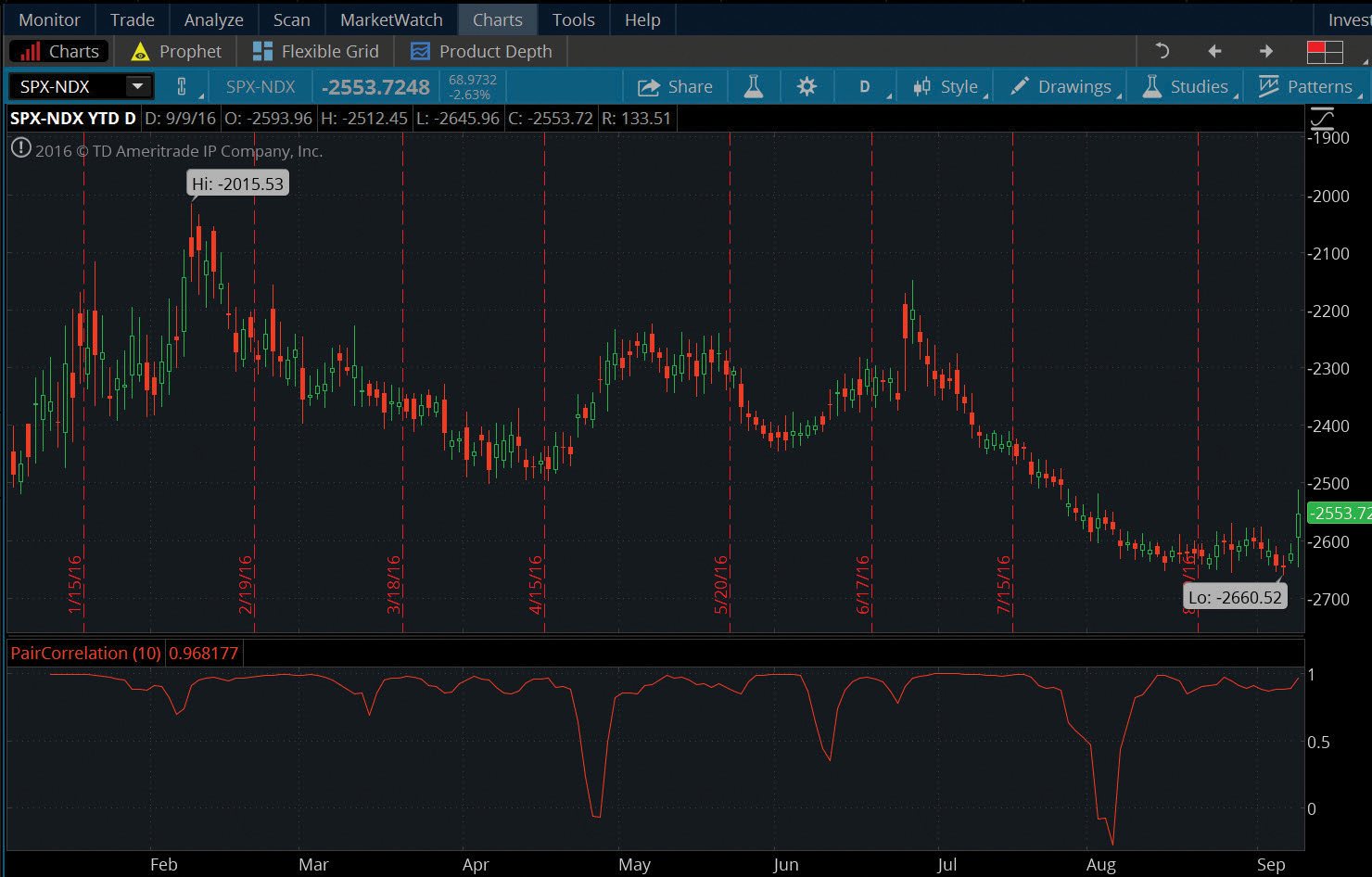 FIGURE 1: HOW CORRELATED IS A PAIR?

How well do these two get along? The Pair Correlation study at the bottom of the price chart shows if the pair is going strong, or not. Source: thinkorswim by TD Ameritrade. For illustrative purposes only. Past performance is no guarantee of future results.

Selection. This is figuring out when you use stock or options, or both. A long stock/short stock pairs trade can use up a lot of trading capital and have a large amount of risk if the pair moves against you. Options, particularly option spreads like verticals, can have lower capital requirements and defined risk. A lower capital requirement means that if you want to trade pairs, you can allocate a relatively small amount of capital to a bullish vertical in one symbol, and a bearish vertical in another. With defined risk, even if the pair’s correlation collapses, your bullish stock crashes, and your bearish stock rallies, the verticals have a defined max potential loss. The loss still hurts. But it doesn’t have to be fatal.

Notional Value. Think about a pairs trade that buys 100 shares of stock A for $100 and shorts 100 shares of stock B at $50. They’re highly correlated, they move up and down together most of the time, and you think stock A will outperform stock B by rising more or dropping less.

A Splash Of Sectors

The first pairs trade to consider is an intrasector trade between two stocks in a particular industry like technology, health care, or energy, where correlation is often high. Consider two hypothetical large oil companies, GTPO and MNAL. Say you chart the “price” of the pair GTPO–MNAL.

Now, you’re making a directional bet on the pair, but the pair may have a couple of advantages. First, you may think a pair is mean reverting. That is, the pair price might oscillate above and below some average level on a regular basis. Let’s say you think the average pair price of the two stocks is $12. If the current pair price is $15, and you think it might revert to $12, you could short GTPO and buy MNAL. If the current pair price is $9, you might buy GTPO and short MNAL. You might be able to evaluate the chart of the pair price more easily than one of the component stocks. Second, the pair may have less risk than either of the component stocks. If the stocks are highly correlated, and in the same industry, the long and short shares in the pairs trade offset each other to a certain degree. They act as a hedge for one another.

A Pinch Of Indices

Another type of pairs trade is interindex, like SPX versus NDX. Think big cap versus small cap. Correlations between the major U.S. equity indices tend to be pretty high, which make them interesting pairs candidates. You can approach them like a stock versus stock pair trade. Yet keep in mind that SPX and NDX don’t have underlying shares, so you’d need to trade that pair using options.

If you looked at a chart of SPX versus NDX and thought that the pair price might go higher, you could consider putting on bullish deltas in SPX and bearish deltas in NDX. Given the relatively high implied vol in SPX, you might sell a put vertical, for example, in SPX to generate positive deltas because the higher implied vol would mean credit spreads have higher prices. And you might buy a put vertical in NDX to generate negative deltas, because lower implied vol would mean debit spreads have lower prices.

A Dash Of Markets

A third avenue is an intermarket pairs trade, like S&P 500 versus Treasury bonds. Get your big kid pants on for this. Recently, threats of higher rates have pushed both Treasuries and U.S. stocks lower, at least in the short term. Maybe you think that Treasuries have sold off a bit much, and the S&P 500 hasn’t caught up to the downside. You may consider a pairs trade that’s long deltas in Treasury futures (/ZB) and short deltas in S&P 500 futures (/ES). Notional value here is critical.

Intermarket pairs trades have the most moving parts, and require the most confidence, experience, and account size. Even if you’re not quite ready for those, the concepts discussed here can be applied to any pairs trade.

This article just scratched the surface of pairs trading, a part of the market that’s often both demanding and rewarding. Pairs trades can be complex, have high commissions, and carry a lot of risk. But they also make you push the boundaries of your trading knowledge. And that’s a good idea for all of us. Because really, who wants just jelly?

Thomas Preston is not a representative of TD Ameritrade, Inc. The material, views, and opinions expressed in this article are solely those of the author and may not be reflective of those held by TD Ameritrade, Inc. Pairs trading requires active monitoring and management and is not suitable for all investors.

Pairs trading requires active monitoring and management and is not suitable for all investors.