Opposites Attract: The Short Version on How to Pairs Trade

Two chip stocks look attractive. Which one do you buy? How about both. Confused? Welcome to the world of pairs trading. Where you don't have to decide. 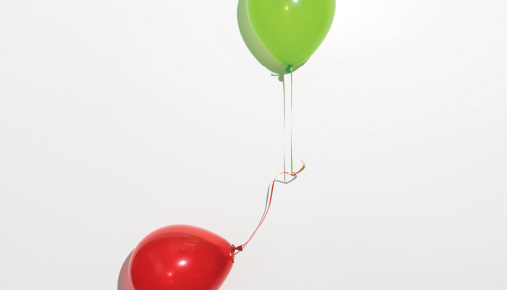 Think Chevy vs Ford. Coke vs Pepsi. Ketchup vs mustard. You like one and don't like the other. Pairs trading is similar: you buy one stock while shorting another. On purpose. At the same time. In a pairs trade, you're long, say, 100 shares of one stock and short 100 shares of another. To get the price of a pairs trade, what we'll call the “pair difference,” take one stock price (usually the more expensive of the two), and subtract the other. If you're buying a pair, you want the pair difference to go up. If you're shorting the pair, you want the pair difference to go down. When you do a pairs trade, you want the stock you bought to outperform the one you shorted. This can happen in three ways, as we'll see using two stocks.

Now, this hypothetical example uses long and short stock positions. But, you can also pair trade using options. Instead of buying stock, you could use positive delta spreads, like short-put verticals or long-call verticals. Instead of shorting stock, you could use negative delta options spreads, like short-call verticals or long-put verticals. Even though you're using options, the underlying premise behind trading pairs is the same: you want the stock in which you have the positive delta option position to outperform the stock in which you have the negative delta option position.

When trading pairs, you might have more confidence in the direction of the pair difference than you do in individual stocks or indices. Stocks can exhibit random patterns. But, certain pairs trades tend to oscillate—their price difference goes up and down around an average level or mean—though this behavior is by no means guaranteed. When it's above the level, it has a tendency to go back down to the level. When it's below the level, it has a tendency to go back up to it. Thus, pairs trades would seem attractive at one extreme or another of a trading range when they can be seen as an “overbought” or “oversold” condition.

Let's consider different time frames. For shorter-term trades, maybe intraday out to one week, pairs that exhibit wide oscillating price movement can move away, and back to an average level, quickly. If you wanted to pursue this strategy, you have to be nimble and sometimes aggressive—ready to take profits, or cut a losing position at any time. Short-term pairs trades require the greatest engagement. For short-term trades, stocks are typically the product used. The short-term pairs trades usually have smaller price targets, maybe only three or four points. When trying to capitalize on those short-term, smaller moves, stocks are typically more responsive to changes in the pair difference. The stock pairs position profit and loss changes dollar for dollar with the change in the pairs difference.

For longer-term trades, you might consider options. With stocks, when a pair difference changes in price, the response is generally 1:1. With options spreads, the response is often slower. With options spreads, you could have defined risk and lower capital requirement positions for a pairs trade. But you have to understand options, and their specific risks, and how those risks are affected in a pairs-trade scenario.

How Do You Find Them?

1. Look for sector pairs. Search industry groups, like large oil stocks, or pharmaceuticals, or retail stocks. Review charts of different pairs to analyze whether the pair oscillates around a mean. If it does, do more analysis. But, start by looking at a chart to see if the oscillation is faster, i.e. more short term, or slower, covering weeks or months. You may have to go through a dozen sets of stocks before you find one you believe worth considering. Finding a good pairs trade takes time. Save them in a watch list in the thinkorswim® software. If you find a pair of stocks whose pair-difference price exhibits the behavior you like, move to more analysis.

Remember that correlation results represent past performance, and as we all know, past performance does not guarantee future results. So while correlation may be valuable in evaluation of potential trades, it doesn't mean the two stocks will always cooperate. For pairs trades, you want to see correlations as close to 1.00 as possible. Now, 1.00 is pretty rare. So, look for correlations that are at least, say, .80. Why?

Hope isn't a strategy. When stocks are uncorrelated, their pair difference can be much more unpredictable. In this case, you're speculating more on individual stock prices, and it isn't really a pairs trade. When stocks are correlated, and they more frequently move up together when the market's rallying, or down together when the market's falling, their spread differences tend to be more predictable, generating that oscillating price movement. If the correlation is low, it's more likely the pair difference will break down and start to move less predictably. You'll want to check the correlation frequently while you have a pairs trade on to see if it's dropping. If it is, you may want to exit the pairs trade for whatever profit or loss it has at that time.

3. Consider time frames. As previously mentioned, look at a couple different time frames for the pair. For example, look at a daily chart for a year, then look at a 20-minute chart for 20 days. The daily data will show whether the oscillation is a recent event, or has been with that pair for some time. The 20-minute data can provide a glimpse into how much that pair might swing intraday. This becomes important if you're only holding a pair for a few days.

5. Pick your exits. Choose the ideal exit points for profits and losses. These mental stops can help prevent a losing pairs trade from potentially creating even larger losses when using stock positions. You may want to set a stop loss at a point just outside the recent range of the pair, to make sure the position doesn't get stopped out in a predicted oscillation. Look to take profits if the pair gets close to the average level.

Putting It All Together

Looking at a daily chart of stock A minus stock B, the pair difference between them seems to oscillate around an average of $3 for the past couple of months. The low end of the oscillation takes it down to $1 before it bounces back to around $3. The high end of the oscillation takes it up to $5 before it drops down to around $3. So, check the correlation and see that it's .85 for the past three months. Good.

Now look at the daily chart for the A/B pair, maybe the 20-minute/20-day chart. Hopefully you'll see pretty much the same oscillating behavior even in the shorter time frame. If not, reevaluate. The current pair difference is $1—the low end of the range. If you believe in the strategy, and think it will bounce back up to $3, you buy 100 shares of A and short 100 shares of B. Maybe set a stop at $-1, which would be a $200 loss for the pairs trade. If the pair difference rallies from $1 to $3, take the $200 profit by selling the long 100 shares of A, and buying back the short 100 shares of B. Now, if you see that pair difference continue to rally up to $5, and you think it will drop back down to $3, short the pair by shorting 100 shares of stock A and buying 100 shares of stock B. And place a stop to buy it back for, say, $7, for a $200 loss, or buy it back when it reaches $3, for a $200 profit. Just remember that the strategy generates multiple commissions, which you'll need to factor in when calculating overall profit or loss.

Wrapping your head around pairs trading isn't easy. But if you can't find what you like in your favorite stocks or indices, the strategy could provide new potential opportunities for those who understand it.

How to Trade Pairs in thinkorswim®

Once you're comfortable with the concept of pairs trading, and it's time to test the waters, the thinkorswim trading platform by TD Ameritrade has a lot of the tools you need to find, analyze and place pairs trades.

You can begin by searching for stocks in an industry sector that might become the components of a pairs trade. Using the Stock Hacker tab, you can scan for stocks within a sector that fit certain criteria you determine, like price, market cap, and levels of implied volatility. Start by clicking on “All Stocks” in the “Search in” field, then choose “Industry” to see the largest S&P industry divisions. You can click on one of them, then drill down into the sectors and groups to include only stocks from that list in your scan.

Select the Trade tab at the top of thinkorswim and then choose the Pairs Trader page in the submenu. Then follow three steps:

1 Chart a pair or indices. If you're looking to trade a pair of stocks, say FAHN and CVRC, you can see a chart of the pair by entering the symbols in each of the “Left Side” and “Right Side” input boxes. Then select the time period at the top of the chart to hourly, daily, weekly, etc. (Alternatively, you can chart pairs in the Charts page of thinkorswim by simply entering the pair [i.e. FAHN-GVRC] in the symbol field above one of the charts.)

2 Check correlation. After you enter the pair symbols in the chart, you can add in the “PairCorrelation” study at the bottom of each pair screen in the Pairs Trader tool to see the correlation between the two symbols. By default, the PairCorrelation study uses 10 bars of data, but you can edit that to match the time frame you want to analyze.

3 Enter a pairs trade order. Once you've entered the two symbols that comprise your pairs trade, you can adjust the quantities that you want to buy or sell, set the trigger price at which you want to execute the pair, then click on the Buy Pair or Sell Pair to route the order.

Equity pairs trading requires active monitoring and management and is not suitable for all investors.