Option prices can speak louder about the state of a stock than most analysts. You just have to listen and understand what they're trying to say. 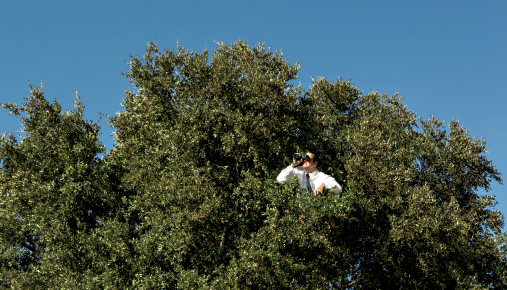 Who can tell you which way a stock's going to go?

A fundamental investor pores over corporate financial statements and reports, looking for some metric or ratio that will indicate a stock is ready to make its big move. On the other hand, a technician believes that all that stuff the fundamental guy looks at is built into the stock's price, and instead spends hours looking at charts, convinced that predictable market behavior reveals itself in studies and patterns. All that's great, if you want to show off how much you know about a company, or its historical price performance. But surprisingly, the price of an option can reveal as much, or even more, than all the Wall Street analysts put together.

That's a pretty gutsy thing to say about a measly option. But it's true. Because the price of an option, or more specifically, its extrinsic (time) value, is a balance of all the buying and selling pressure on it. There can be thousands of traders placing buy and sell orders on a single option, with the buyers believing that the stock might move enough to make the option in the money by expiration, and sellers believing that the stock might not move enough to make it in the money.

An option's extrinsic value is the market's estimate of the probability of the stock reaching the option's strike price. (Now, bear in mind that the price of an out-of-the-money option is composed entirely of extrinsic [time] value.)

For example, as you look at options further and further out of the money for a given expiration—say, puts with lower and lower strike prices, or calls with higher and higher strike prices—the options have lower prices. Why? A stock is less likely to have a larger price change, than a smaller price change, given a normal distribution of stock-price returns. The further out of the money an option is, the less likely it is that the stock will have a price change large enough for that option to be in the money. No matter what the price of the stock is, no matter what the volatility is, further out-of-the-money options are cheaper, and have a lower probability of being in the money. An option's extrinsic value informs you of the likelihood of the potential magnitude of the price change—not the direction.

Here's a simple example, assuming the cost of carry is 0%. If a stock price is $100, and the 95 put and 105 call in the same expiration are both trading at $2.00, then the market is saying that a 5% move up is just as likely as a 5% move down. But, if the 95 put is trading at $2.20, and the 105 call is trading at $1.90, the market is saying that a 5% move down is more likely than a 5% move up. You can potentially quantify that likelihood by using the option's extrinsic value to derive an implied volatility, and then use that implied volatility as input into the probability formulas.

The math may seem complicated. But simply put, the market fears crashes. That leads to buying pressure on out-of-the-money puts, which pushes up their prices. The more fear of a larger negative price change, the more traders will buy even further out-of-the-money puts.

On the opposite side, traders often sell calls against long stock to reduce their cost basis. That leads to selling pressure on out-of-the-money calls, which pushes their prices lower. Many traders will sell the calls at the strike they think the stock has a lower probability of reaching. If they think the stock won't rise very much, they'll sell calls at strikes just out of the money.

In fairness to the technical and fundamental analysts, the option's price, or extrinsic value, contains no directional, i.e. bullish or bearish, information. “No fair!” cry the analysts. “If an option can't tell you whether a stock is going to go up or down, what good is it?” The answer? It ain't the stock. It's the strategy.

And that's the next step in the evolution of the retail trader and investor—not just deciding which way a stock might go when you trade it, but rather how you trade it. Look, there's lots of good analysis out there that can help you decide whether a stock, an index, or a commodity might go higher or lower. That's not the point here. But sometimes, the difference between profit and loss is the strategy you choose, not the choice of direction.

Over the past five years, the S&P 500 has seen some pretty dramatic market action, what with a near meltdown of the world financial system, to strong corporate earnings in the following years.

Looking at a chart for the S&P 500 from July 2007 to July 2012, you might think you'd be profitable over that time, if you just bought and held an S&P index tracking product. Buy and hold is a long-term bullish strategy, where you're invested all the time and you're not trying to time the market.

Another bullish strategy—selling naked puts in the SPX—doesn't necessarily time the market either, but this approach does use the probability information that the option prices are telling you. To test the strategy, not the stock (or in this case, the S&P 500 index), we compared the returns of the S&P 500, and selling an out-of-the-money SPX put over those five years. (For details on this study, see the sidebar, “How to Run a Study.")

To test the buy-and-hold strategy, we recorded the prices of the S&P 500 on June 18, 2007, and July 20, 2012, and then added in historical dividend yields. The short-put strategy found an SPX put closest to a .32 delta on the first day of each expiration cycle, and held it through expiration. Both strategies were bullish, and would benefit if the S&P 500 increases, and lose if the S&P 500 drops. Since both strategies were invested at all times (there was no market timing with regard to price or volatility), the results were a bit surprising.

On average, the short-put strategy generated 215% monthly positive returns, while, on average, the buy-and-hold S&P 500 strategy lost -.19% monthly (including dividends) over those five years. (Bear in mind, the short-put strategy does not include charges for commissions, contract, exercise, and assignment fees, which would produce lower net returns.) Over the 61 months of the experiment, the short-put strategy was profitable in 45 (73.8%) of those months, while the buy and hold was profitable in 39 of those months (63.9%). If you picked a different time period, a shorter time period or a longer time period, the results might be reversed. And there's no guarantee that selling out-of-the-money SPX puts will outperform buy and hold in the future.

Using the put's delta as a proxy for the probability of expiring worthless, would let us estimate the likelihood that the short put would be out of the money at expiration. A .32 delta suggests the short put would expire worthless approximately 68% of the time. In periods of higher volatility, the relationship between volatility and delta is that the .32 delta put would be further out of the money from the current SPX price, than it would be with lower volatility. In this way, the put reflects the overall market's opinion of how much the SPX might change in one expiration cycle.

It's the Strategy, Stupid

Why did the bullish short SPX put outperform the bullish S&P 500 buy and hold? The information provided by the SPX put itself helped us select the out-of- the-money strike that was hopefully, far enough out of the money, so that the SPX could drop and cause losses for the buy and hold, but not drop so much that it caused losses for the short put.

The downsides to the short-put strategy? Naked option strategies involve a significant amount of risk and are only appropriate for traders with the highest risk tolerance. A cash secured SPX put would require approximately $140,000 of trading capital. The equivalent in the buy-and-hold strategy would be to invest $140,000 in an S&P index tracking product. However, most index tracking products (such as mutual funds or exchange-traded funds) can be purchased in much smaller amounts, making the buy and hold more accessible to investors with less capital. Also, the short-put strategy is essentially putting on a new trade every month, incurring commissions, contract fees and possible option assignment fees with each trade.

The key? Reading an option price to reveal the market’s collective wisdom, then using that wisdom to select the strategy. The technology to do this quickly is also at your fingertips. Who would have thought that one measly little option could help you become a smarter, more confident trader?

How to Run a Study

I conducted this study using the thinkBack® tool on the thinkorswim® platform. You can access thinkBack by going to the Analyze tab, and clicking on the thinkBack sub tab. The thinkBack screen looks very much like the Trade screen except that the data is not live. After you type in the symbol, in the upper right-hand corner set the date for which you want to see options data. I used the Calendar feature on the date control to see the highlighted expiration dates for each month. I simply clicked on the date of the Monday after each expiration, to see a snapshot of the closing option prices. then found the put in the front-month expiration, whose delta was closest to .32, then used the mid-price, or average, of the bid and ask prices, to estimate the credit received to sell that put in the experiment.

Transaction costs (commissions and other fees) are important factors and should be considered when evaluating any options trade.

Back testing results presented in the thinkBack tool are hypothetical, they did not actually occur and they may not take into consideration all transaction fees or taxes you would incur in an actual transaction. Results could vary significantly, and losses could result.

TD Ameritrade does not make recommendations or determine the suitability of any security, strategy or course of action for you through your use of its trading tools. Any investment decision you make in your self-directed account is solely your responsibility. All investment involves risk, including loss of principal.