It's the Math, Stupid: Making Sense of Black-Scholes

At some point in your option-trading career, you're probably going to come across the Black-Scholes option-pricing formula. So you won't mind if we break it down into simpler terms that should be useful. 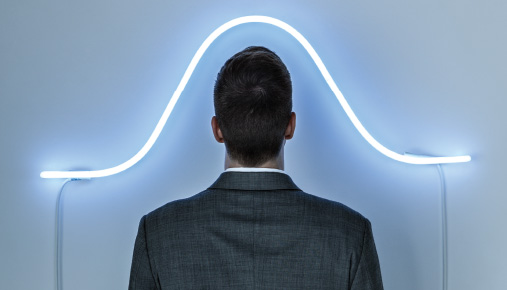 Black Scholes. Those two words have very nearly defined options trading for the past 40 years. Fischer Black and Myron Scholes, two University of Chicago economists, published the eponymous formula back in 1973 and nearly 500 monthly expirations later, the trading industry still relies on the formula and its variants to generate theoretical option values. The formula itself is, shall we say, a bit dense:

Ugh. This is part of the reason many retail traders take a pass on studying it too closely. Most of the articles about Black Scholes are written by math geeks showing off how well they can untangle that knot. And that complexity can also disguise its value.

In my case, I’m a trader, not a mathematician. So this article is going to be like a Cliff Notes breakdown. Why bother? Because knowing a bit of theory behind Black Scholes can make you a smarter trader. And this article may very well be all you’ll ever need to know about it.

Now, keep in mind that I’m taking short cuts to describe the formula. There are whole books written on it by finance professors that will describe in great detail its derivation. If you’re a glutton for punishment, read the books. Everybody else, read on.

The world welcomed Black Sholes because it was the first closed-form (as in “stick in the inputs and get an answer”) formula to help evaluate an option. Using put-call parity, it was easy to value a call as long as you knew the price of the put at the same strike and price of the stock, and vice versa. But what if you didn’t know the price of either the call or the put? That’s where Black Scholes came in. Drilling down, the formula requires five inputs:

The formula itself— c=SN(d 1 ) – Ke– rT N(d 2 )—states that the price of a call is the value of the shares of stock that would hedge that call, minus the value of a risk-free bond equal to the strike price. Huh? Right. Well, Black Scholes values an option as a dynamic, self-financing portfolio. Don’t get hung up on that.

What’s more important is this:

What " 1n (S/K) ” does is turn the stock price S into a variable that is some percent higher or lower than the strike price K. By doing that, Black Scholes converts a stock price, which can never have a negative value, into something that can—a percentage. That’s why Black Scholes uses the normal distribution—the “bell curve”, a well-established statistical theory—as part of its calculation.

That percentage stock price moves up and down randomly according to this part:

The “random walk” pushes the stock price up by “r” (hey, if you invest in a risky stock, your expected return should be at least as high as the risk-free rate), plus a random impact higher or lower from volatility (“O”). The higher the volatility, the wider the potential percent price changes beyond the risk-free rate.

converts the percentage stock price into a standard normal variable, which lets us calculate the probability that the stock will have a percentage change large enough to reach the strike price. The percentage price changes move randomly around an average value, with smaller changes more likely, and larger changes less likely.

It’s not the stock price itself that’s random. It’s the day-to-day percentage changes that are random. The model assumes those changes are independent from one day to the next. What happened yesterday has no influence on what happens today, which has no influence on tomorrow. Specifically, no matter how many days a stock has rallied or dropped, it doesn’t affect the probability of whether it will go up or down the next day.

The Punchline For Traders

For instance, how likely is a 1%, 2,%, 5%, 10% or more price change up or down between now and the option’s expiration? Stop and think about that. The Black Scholes theory that underpins so much of the trading and investment industry doesn't actually believe there’s any value in trying to determine the direction of a stock. Despite all the Wall Street analysts trying to predict stock prices, despite the various and sundry market predictions by all the talking heads on financial networks, Black Scholes simply suggests stock-price changes are random.

But while the up/down direction is random, the magnitude of price changes isn’t exactly. It’s volatility that gives us an idea of the probability that the stock price will change by some percentage up or down. And we can use that information to choose a strategy.

For example, selling options that are outside an expected up/down range, in a stock with a quantifiable probability of the stock not breaking through that range, is a technique often used by professional traders. They don’t try to pick direction by looking at charts, financial metrics, or analyst reports. They try to guess magnitude by looking at volatility.

Despite its longevity and power, Black Scholes does have some weaknesses. First, it only prices European-style options. It doesn’t factor in the early-exercise feature of American-style options. Second, it assumes that dividends are paid at a constant rate, not once a quarter as you see in most US stocks. Third, it assumes that volatility is constant over the life of the option. Despite the limitations, its underlying assumptions are carried into most other option-pricing formulas that solve those problems, like the Bjerksund-Stensland model used for American-style options on the thinkorswim® trading platform (For more, see "Three's Company" below). The Black Scholes theory is behind the probability models on the platform, too.

In the end, if you base your trading strategies on option prices themselves, probabilities and volatility, Black Scholes has your back. It’s no guarantee of profits. But you’re on solid theoretical ground. Of course it helps to have the theoretical tools at your fingertips on thinkorswim so you don’t need to deal with the formulas yourself. We figured out the math. Now put it to good use.

But the binomial model is slow to compute because is uses an "iterative" method. When you need to calculate hundreds of greeks and option values with real-time data, binomial can get bogged down. In 2002, the Bjerksund-Stensland model was created. It’s a closed-form model (like Black Scholes), so it’s fast to compute, and it can value American-style options—which is why it's now the primary option pricing model in thinkorswim.