How to Lose a Trade—A Trade Management Manifesto 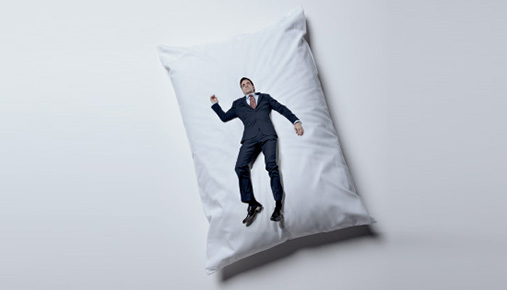 If you’ve ever seen the hit TV Series House, M.D., you understand the basic plot of doctors trying to narrow down the correct diagnosis based on the symptoms then provide treatment.

Trading is similar. You’re the patient. Your symptoms can include anguish, lost money, frustration. The diagnosis is clear: a trade is losing—perhaps is even on life support. But what’s the correct course of treatment? That’s the tough question.

When you’re facing a bad loss, the idea of ‘informed consent’ becomes critical. Of course you could just close a trade and move on. But where’s the fun in that? Let’s look at how to handle a losing trade in three ways, other than giving up, and what those decisions mean for the health of your book.

Let’s imagine a short-call spread is the patient. This is a specific kind of trade, but these ideas will apply to lots of other fancy trading moves such as calendars, iron condors, and single-option positions.

However, the moment of reckoning has arrived. In less than two weeks, the stock has jumped to $370, and while the spread is still out of the money (OTM), it’s worth $2.00 and therefore has a $1.00 loss. What do you do now?

One: Holding The Trade

Why not? This involves sweating it out, lighting a few candles, and doing a funny dance around your computer while you wait for the trade to move back in your favor. In this example, with a short OTM-call spread, you hope for the stock price dropping, time passing, or a little of both. If neither happens, you may be looking at losses far beyond what you expected. (Ugh.)

The very scary specter of unanticipated losses can hold tremendous implications for your next trade. Sure, in this one trade you might lose more than your plan dictated. But as long as the risk is small and contained it won’t get out of hand you think, right?

First, let’s hope not. Second, and more to the point, panic is not the best course of treatment. If you learn to tolerate heavier losses on certain trades, you build your white blood count. You’ll adjust your longer-term trading to allow for both calmer reactions when you spike a fever and have to manage downturns. And you’ll discover a skill for leveraging potentially greater profit when your trades are robust.

One last consideration: if you were looking to put this trade on at the moment of crisis, would you? If there is no rational trading reason to stay in, then close. On the other hand, if hitting the loss exit coincides with the stock hitting a resistance point, you may consider holding the trade to see if resistance works and the stock reverses.

Pros & Cons of Holding the Trade:

(+) Possibility of a trade reversing its losses.

When you adjust a trade, you alter the existing position by introducing a new option position. Alternatively, you can take options away in order to make the trade new. In the latter case, you believe the trade has a higher likelihood of recovering its losses, getting back to breakeven, or even profiting. When considering adjustments, focus on three things: 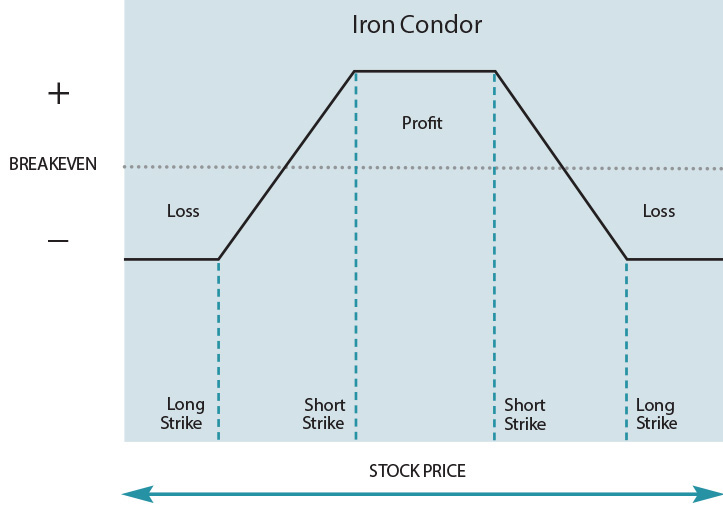 By adding another short vertical (this time a put vertical) to the short call vertical, you can mitigate some risk while amplifying the profit potential. For illustrative purposes only.

By the way, this adjustment adds $1.00 to the breakeven level. It doubles the maximum profit potential, while reducing the risk to $3.00 and increases time decay. No-brainer, right?

Not just yet. While the “total risk” of the position has decreased, there are now more places where maximum risk can occur. Ask yourself: if the stock reverses, am I comfortable handling the losses the new position might introduce?

Pros and Cons of Adjusting the Trade

(+) Gives you time for the trade to work by increasing theta. Potentially reduces net risk.

(-) Creates a theater of risk that didn’t before exist.

Rolling means different things to different traders. But essentially it involves moving a trade from one place to another. That is, closing the original position, then opening a new position with different strikes, with a different expiration, or both.

Trade 1 shows a simple roll higher. Notice the roll uses a long-call condor order—buying the lower spread then selling the higher spread which will usually trade for a debit. Be aware: debit and commissions can eat away at credits. Rolling for a credit’s ideal, but generally you need to roll to a longer expiration.

Pros and Cons of Rolling Trade 1

(+) Moves your trade further away from the stock without adding additional time to the trade.

Trade 2 shows a roll out to the next month but keeps strike prices the same. This is traded as a “vertical-roll” order and with current prices is traded for a small 20-cent credit added to the overall trade credit, less transaction costs.

Pros and Cons of Rolling Trade 2

(+) Traded for a credit, which can reduce risk. Time may be viewed as positive if stock backs off.

(–) Time is a problem if stock continues higher and theta starts to work against you. 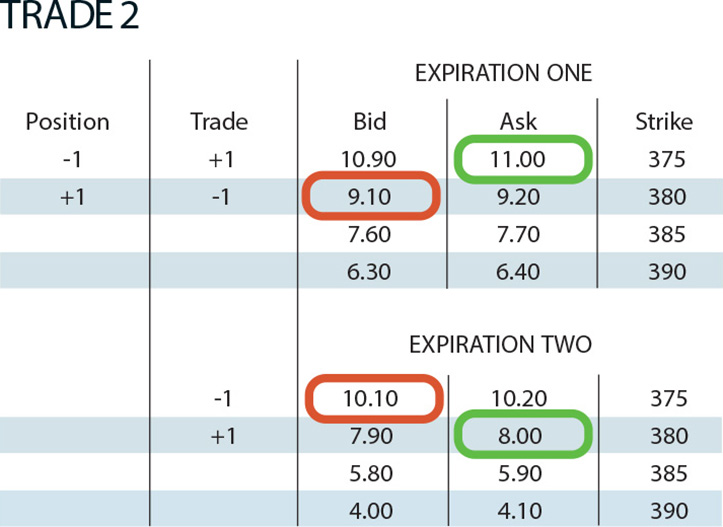 Trade 3 demonstrates a vertical rolling up in strike prices and out in time. Depending on time to expiration, available strike prices, and how close the spread is to the stock, this type of roll can trade for a credit, debit, or even money.

Rolling can be costly as the spread approaches the stock price and then goes in the money . So if you’re going to violate your trade plan, do it before you lose the chance to roll for a credit. The question to ask yourself: do you want to add time to a trade in exchange for breathing room and a credit?

Pros and Cons of Rolling Trade 3

(+) Moves your trade further away from the stock and maybe brings a credit.

(–) Moves the trade further from expiration. 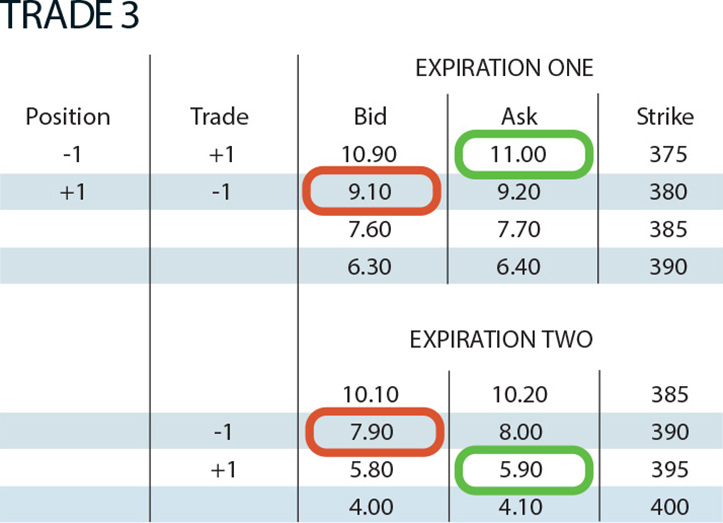 Only hindsight will dictate the best decisions when your trades are facing a hacking cough and cold sweats. In the main, should you alter your trading plan, always look a few steps ahead. What does “a healed trade” look like? Understand the implications of the new course of treatment. In a nutshell, that’s your “informed consent.”

Spreads, condors, butterflies, straddles, and other complex, multiple-leg option strategies can entail substantial transaction costs, including multiple commissions, which may impact any potential return. These are advanced option strategies and often involve greater risk, and more complex risk, than basic options trades. Be aware that assignment on short option strategies discussed in this article could lead to unwanted long or short positions on the underlying security.

The naked put strategy includes a high risk of purchasing the corresponding stock at the strike price when the market price of the stock will likely be lower. Naked option strategies involve the highest amount of risk and are only appropriate for traders with the highest risk tolerance.

The risk of loss on an uncovered call option position is potentially unlimited since there is no limit to the price increase of the underlying security.

Option writing as an investment strategy is absolutely inappropriate for anyone who does not fully understand the nature and extent of the risks involved.

The maximum risk of a covered call position is the cost of the stock, less the premium received for the call, plus all transaction costs.

Rolling strategies can entail substantial transaction costs, including multiple commissions, which may impact any potential return. You are responsible for all orders entered in your self-directed account.