There’s a way to generate “income” from dead investments, even if they aren’t optionable—how to hedge mutual funds with options. 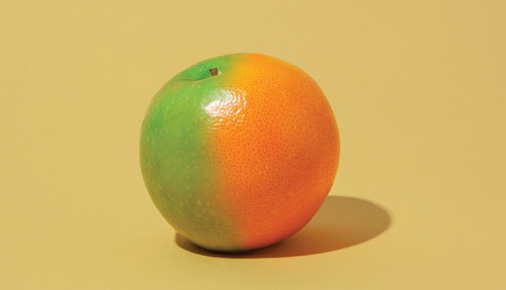 For the sake of simplicity, the examples below do not take transaction costs (commissions and other fees) into account.

Remember the old Certs commercial? Two mints in one? In today’s market, sometimes a trader is also an investor. And as an investor, you may hold some core positions longer term, maybe even for years (gasp). Nothing wrong with that. For a lot of investors, core positions are mutual funds.

Perhaps you’ve tried options strategies with the intent of generating income or reducing the cost basis of core positions. If they’re comprised of individual stocks, you might sell calls against them. For example, if your core position was long shares in AAPL, GM, and XOM, you could sell calls in AAPL, GM, and XOM, respectively. This, of course, is a covered call strategy, which limits the upside potential of the underlying stock positions in exchange for selling the right to call your shares away.

Unfortunately, options aren’t traded on mutual funds. And mutual funds don’t always move higher. So since selling calls against mutual funds isn’t possible, how can you generate income on them?

When Selling Calls Is Not An Option

Conveniently, there are options on the big indices whose symbols are SPX (S&P 500), NDX (NASDAQ 100), and RUT (Russell 2000). Since selling a call on an index like SPX isn’t “covered,” if you’re a qualified options trader, you may consider selling out-of-the-money (OTM) call verticals in those index options, in combination with your mutual fund, to mimic what you do when you sell calls against stocks.

With OTM short call verticals on SPX, you have defined risk equal to the difference between the long and short strikes, minus the credit received. Therefore, the cash requirement can be low. And if your fund is in an appropriately approved IRA, you can typically sell call verticals. There are generally three steps to this process:

1. Check the correlation between your fund and the index;

2. Determine the quantity of call spreads to sell;

3. Choose where to place the call spread.

Correlation reveals the strength of the price relationship between two symbols (e.g., an index and a mutual fund) for a certain amount of time. Explore the correlation by firing up the Charts tab in the thinkorswim® trading platform by TD Ameritrade, and refer to Figure 1. 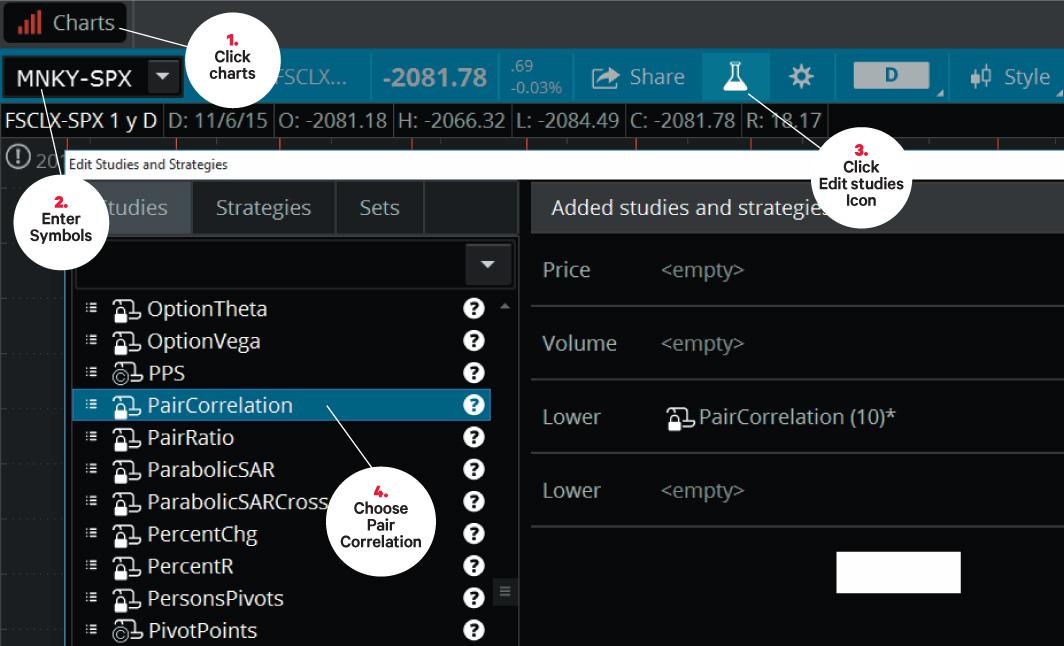 To correlate a fund against an index, follow the steps above in the Charts tab of thinkorswim. Source: thinkorswim by TD Ameritrade. For illustrative purposes only.

First, go to Charts and type in the fund symbol, minus the symbol of the index it’s most closely tracking—such as SPX (if the fund tracks the S&P 500). For example, “MNKYX SPX”.

Next, go to the Edit Studies menu and select “Pair Correlation” from the studies list. This adds a study to the chart that shows the correlation between your two symbols, MNKYX and SPX.

The default amount of time for the Pair Correlation study is 10 days, which you can edit. The strongest correlations are high no matter what timeframe you look at.

Now, it's possible to lose money on both the mutual fund and short index call spread if the correlation turns negative and the fund price drops while the index rises. As long as the fund holds similar stocks to those in the index, the correlation should stay positive. But be aware there are no guarantees with this strategy. (Keep in mind also that spreads strategies can entail substantial transaction costs, including multiple commissions, which may impact potential returns.)

Determine the Quantity of Spreads

Once you’ve identified the index correlated to your fund, how many call spreads do you need to sell? For that, determine how many SPX deltas your fund position represents, which can be found under the Analyze tab of thinkorswim.

Type in the fund’s symbol on the Analyze page. If the fund is held in your TD Ameritrade account, you’ll see it in the Positions and Simulated Trades section. If not, you can enter a simulated trade that’s the same as your actual position by clicking on the “Ask” field on the Add Simulated Trades sub-tab. Even though the Ask price is “N/A,” you can still create a simulated long position in the fund.

Figure 2 shows a simulation of being long 5,000 shares of the fund. To determine the number of spreads to sell: 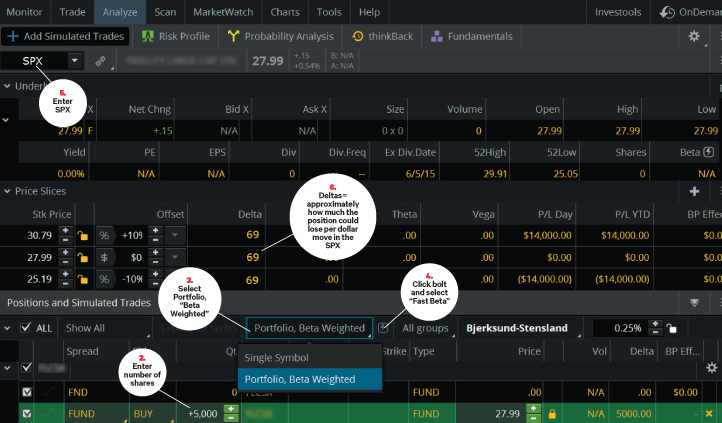 FIGURE 2: HOW MANY SPREADS DO I SELL?

Once you’ve determined which index is most correlated to your mutual fund, beta-weight your fund against that index to determine the number of spreads to sell. Source: thinkorswim by TD Ameritrade. For illustrative purposes only.

To determine how many short OTM call spreads you’ll need, let’s assume the max risk of a single, short SPX call spread is $500. If you sold three of those call spreads and the market goes up, you could potentially lose a max of $1,500. Of course, it depends on how far OTM you sell that call spread (we’ll consider that next). But if you sell call spreads less than 10 points OTM, and the SPX goes up 20 points, you would lose $1,500 and your fund would only theoretically make $1,380. If the market goes even higher, the loss on the three short call spreads is limited to $1,500, and your fund might continue to make money.

Choose Where To Place the Call Spread

Selling a nearer OTM call spread will give you a larger credit, but it takes a smaller move in the index for it to lose money. Selling a further OTM call spread takes in a smaller credit, but gives the index more room to move higher before the trade loses money. And you take in more credit when you choose a call option spread in a further expiration, but that gives the index more time to move higher and create a loss.

Overall, be patient with this strategy. The goal is for the credits from the short index call verticals to slowly accumulate and generate extra income, and/or indirectly reduce the fund’s cost basis. The credit you receive for selling the call spread is the amount your fund’s cost basis decreases with this strategy. Conversely, any loss on the verticals would increase it.

Finally, you’ll need buying power in your account to cover the margin requirement for the short call spreads. If all you have is the mutual fund, you’ll need to deposit cash. Now, go take a look at your mutual funds with a whole new perspective.