Taking a Dive Into the Not-So-Deep End: Defined-Risk Trading

Maximizing the risk/reward of a defined-risk trade—how to increase the risk-to-reward profile in short vertical spreads. 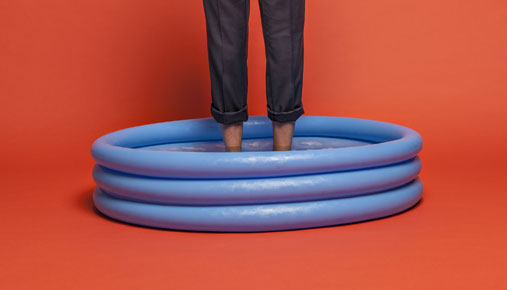 Option trade examples presented here are for illustrative purposes only and, for the sake of simplicity, don’t include transaction costs.

When you ride a bike you know your limits. Pedaling down a quiet street? No problem. Racing down the Alps in the Tour de France? Maybe not. And while a ride down a quiet street is nice, the Alps are more exciting. The question is, can you get some of the fun of the Alps without the risk of broken bones and an expensive trip to France? While I can’t comment on cycling, there is a middle ground between the “quiet street” in trading and the “Alps.” And it uses strategies with which you’re probably already familiar.

When it comes to using short spread strategies, positive time decay (or positive theta) is a good thing to have. All other things being equal, positive time decay can help create profits as time passes. But it always means being short an option. Long options have negative time decay. So, to generate positive time decay, the strategy needs to include a short option. There are different ways to be short an option, however. The riskiest of them all is a short naked option, which generally has very large or unlimited risk. These are the “Alps.” Short option spreads, on the other hand, which have both a long and short option in them, have “defined risk”—meaning the max loss on the spread is limited, no matter where the stock or index price goes. These are the “quiet streets.”

Squeezing More From Your Spreads

There is a way to increase the risk-to-reward profile in some spreads and stay within their defined-risk world. The idea here would be to capture the most time decay in the short option and reduce the time decay in the long option. You just have to get creative. Let’s look at both the vertical spread and the iron condor.

THE SHORT VERTICAL DILEMMA
The margin requirement on a short put vertical is the difference between the long and short strikes, minus the credit received. Now, many traders place short put verticals using adjacent strikes—such as the short 97/98 put vertical for, say, $0.25 credit. This trade has a max risk of $75 if the stock is below $97 at expiration and a theta of $0.50 per day.

An Alternative: The Super-Wide Vertical
Just because you prefer defined risk doesn’t mean you’re limited to verticals with adjacent strikes. Say you bought the 88 put instead of the 97 put, to create a short 88/98 put vertical. By widening the short strike from 97 to 88, you’ve increased your risk-toreward substantially. (See below)

If you shorted that put vertical for $1.60 credit, its max potential profit of $160 is larger than the $25 of the 97/98 put spread. Its max potential loss is larger, too—$840 if the stock is below $88 at expiration versus $75 for the 97/98 put spread. That $840 is also the margin requirement for the short 88/98 put vertical. And because there are 10 points between the long and short strikes, the theta of the vertical will be higher, too, because the 98 put can have a much higher theta than the 88 put.

THE IRON CONDOR DILEMMA
The iron condor is a common spread combining two short vertical spreads—a short put vertical combined with a short call vertical. Suppose you have a stock at $100. Like a short vertical, most think of an iron condor as having the long and short call and put strikes adjacent—for example, long a 97 put, short a 98 put, short a 102 call, and long a 103 call. Let’s also say theta for the position is $0.75 per day.

An Alternative: The Super-Wide Iron Condor
If you are looking to increase the risk/reward profile of your plain-vanilla iron condor, like the short vertical, you can widen out an iron condor’s long and short strikes. This keeps its defined-risk characteristics intact, but you’ll squeeze more juice from the strategy.

Although short verticals and iron condors still have defined risk even when you widen out the strikes, it doesn’t mean the risk is small. If our stock went from $100 to $90, the loss on the short put vertical could be about as big as that of a short naked put, and the iron condor’s loss about as big as a short strangle.

If higher risk-to-reward is what you’re looking for, you don’t need to go further than defined-risk trades like verticals and iron condors. In some cases, just by widening the strikes of the spread, you can tailor defined-risk strategies to look more like their unlimited-risk cousins.

How To Pull Up a Risk Curve on the Analyze Page

You can use the Analyze page on the thinkorswim® from TD Ameritrade trading platform to simulate the P/L and theta of verticals and iron condors of varying widths until you find one with a comfortable risk-to-reward ratio.

Who Adjusted My Options? And Other Corporate Action Questions 8 min read Making Sense of Black-Scholes 7 min read The Short Option: A Primer on Selling Put and Call Options 11 min read

Short equity options can be assigned at any time up to expiration regardless of the in-the-money amount. Spreads and other multiple-leg option strategies can entail substantial transaction costs, including multiple commissions, which may impact any potential return.