Turn a Long Butterfly Spread into a Credit Spread? Break a Wing

Learn how to turn a long butterfly spread—typically initiated with a debit—into a credit spread by adjusting one of the wings, aka a “broken wing butterfly.” 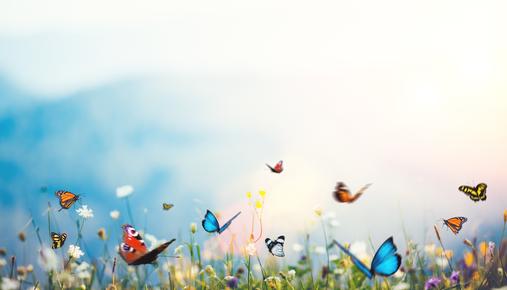 But if you make one small adjustment to the butterfly, you turn it into its cousin—an unbalanced, or “broken wing” butterfly—with an entirely different risk profile. If structured properly, this spread can be initiated at a credit, meaning you initially receive a premium, minus transaction costs.

For these examples, let’s assume the underlying stock is trading at $70, and the call options chain looks like this:

A standard butterfly spread is made up of either all calls or all puts, with three equidistant strikes on a 1x2x1 ratio. See the example in figure 1. 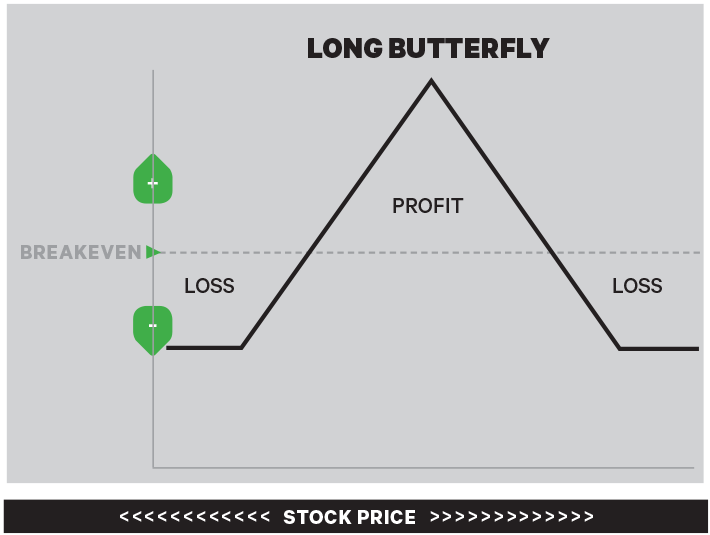 Made up of 3 equidistant strikes: buy 1, sell 2, buy 1. Another way of looking at it is a long vertical spread and a short vertical spread, with a common short strike. For illustrative purposes only.

Note: Remember the Multiplier! For all of these examples, remember to multiply the option premium by 100, the multiplier for standard U.S. equity option contracts. So an option premium of $1 is really $100 per contract.

It’s worth noting, however, to be aware of the risks as expiration approaches. Depending on where the underlying stock settles on expiration day, you may be left with a stock position, as shown below.

If you’re comfortable with a stock position, or the risk of getting a stock position, fine. But if the underlying stock is near the 80-strike as the option expires, you may not know whether you’ve been assigned until after the close, so you must wait until the next trading day to cover your position. Plus, exercise and assignment costs may be higher than standard commission rates. Some option traders choose to unwind such positions before expiration to help avoid these risks.

So, here’s where that one little adjustment comes in. Suppose you wanted to initiate this spread at a credit instead of a debit. One idea is to choose a higher (and thus less expensive) strike for that last leg. This may allow you to collect an initial premium, as shown in figure 2, but it will also expose you to more potential risk. 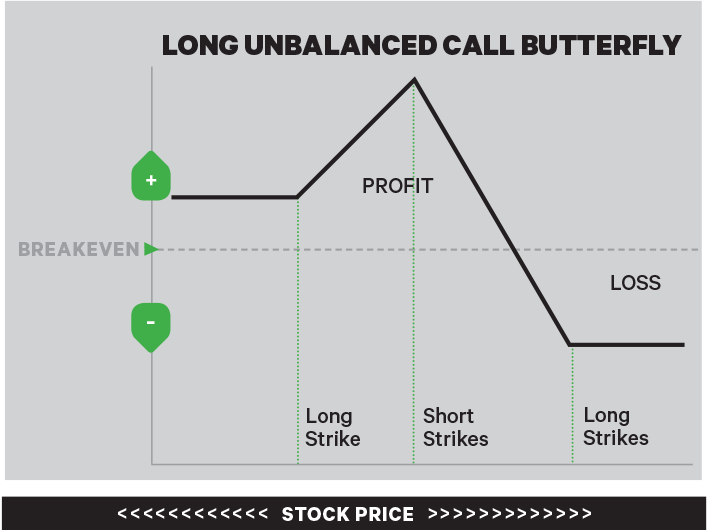 Shifting to a non-equidistant strike changes the risk profile. For illustrative purposes only.

If the stock is below $75 at expiration, instead of losing the price paid at order entry, you get to keep the premium received after transaction costs. That’s why some traders might use a broken wing butterfly as a substitute for an out-of-the-money (OTM) vertical credit spread. But, unlike credit spreads where the maximum profit potential is limited to the entry credit, broken wing butterflies retain the profit potential of the regular butterfly. With this example, for instance, if the stock settles at $80 at expiration, the maximum profit of this broken wing is $5.00 plus the entry credit of $0.15, (or $515 with the multiplier), less transaction costs.

Don't forget to go through the "if-then" expiration scenarios above, but using the 90-strike, so there are no post-expiration surprises. Remember the first sentence of this article, which said the butterfly is a common choice among sophisticated options traders.

It’s Not All Roses

Breaking off, or unbalancing, that wing brings you something you might not want—added risk. Since you’re moving the wing further OTM, you’re increasing your risk. For every dollar further away you move the wing, you increase the risk by $1 ($100 with the multiplier). So in this example, moving the highest wing from the 85-strike call to the 90-strike adds $500 of risk, for a worst-case scenario of ($500 – the $0.15 initial credit) = $485, plus transaction costs. For a graphical representation, see figure 3 below. 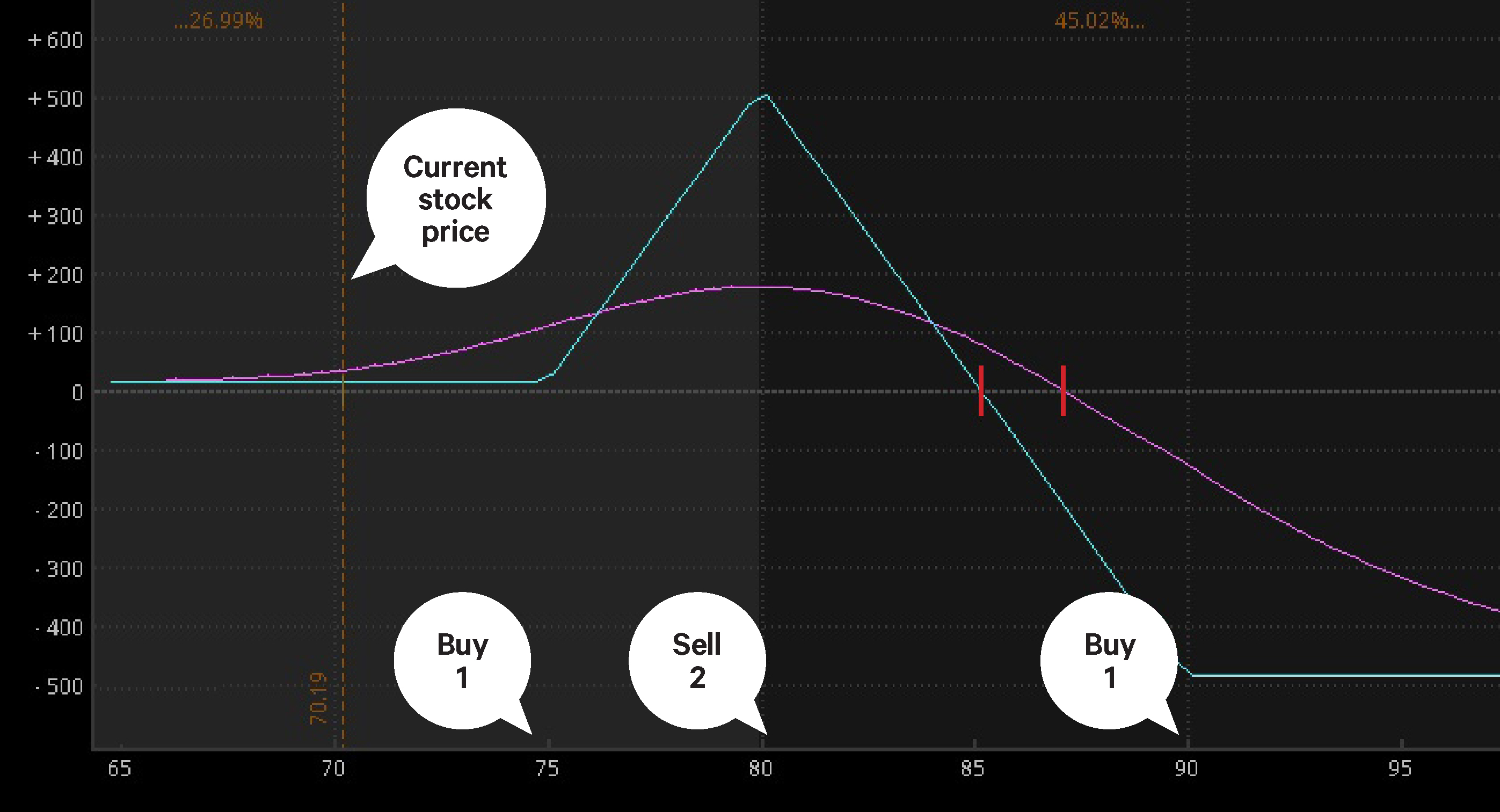 And one other thing—a debit butterfly, with equidistant wings, will generally incur no additional margin requirements. When you break a wing or skip a strike, it’s considered a debit spread and a credit spread, so you will likely be required to post additional margin.

Is breaking the wing for an extra credit worth the added risk? That’s for the trader to decide. Some traders will set the middle strike of the broken wing at the far end of their expected range for the underlying stock. That way it would take a bigger-than-expected move to get the stock to that “danger zone.” And if it does, it may make sense to close the trade.

Broken wing butterflies aren’t appropriate for every market, nor for every level of implied volatility.  But understanding the mechanics of the strategy can be the first step in deciding whether it’s right for you.