Learn to use the Bollinger Bands volatility indicator when measuring overbought and oversold conditions in stocks and indexes. 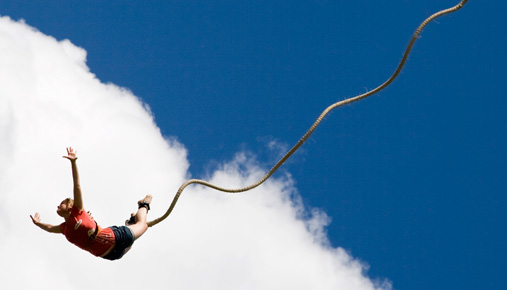 Bollinger Bands are one of the more widely used technical indicators because they are relatively simple to understand and intuitive to apply. Among other applications, some traders apply Bollinger Bands to measure overbought or oversold conditions in stocks, indexes, futures, forex, and other markets. In this article, we’ll take a look at applying Bollinger Band to stock indexes.

Bollinger Bands are typically plotted with three lines around the price of an index.

The middle line of the indicator is a simple moving average (SMA). Most charting programs usually default to a 20-day SMA. This is usually adequate for most investors, but you can experiment with different moving average lengths after you get a little experience applying Bollinger Bands.

The upper and lower bands represent two standard deviations away from the moving average.

Figure 1 shows an example of Bollinger Bands applied to the Russell 2000 ($RUT.X).

This Bollinger Bands indicator uses a 20-day simple moving average applied to the $RUT.X. The middle line represents the 20-day SMA and the upper and lower lines represent two standard deviations away from the moving average. Chart source: tdameritrade.com. For illustrative purposes only. Past performance does not guarantee future results.

The bands tend to narrow when an index goes quiet and day-to-day changes are small. At other times, the bands widen as an index becomes volatile and day-to-day changes are big. Take a look at the chart of the NYSE Arca Airline Index ($XAL) in figure 2. Notice how the bands contracted when the $XAL traded in a quiet, relatively stable fashion. Then look at how the bands expanded when the index experienced large price changes, down and up, over short periods of time.

Bollinger Bands expanded when the $XAL became volatile and experienced large price changes in a short time period. The bands contracted when the $XAL traded in a tight range. Chart source: tdameritrade.com. For illustrative purposes only. Past performance does not guarantee future results.

Understanding how the bands expand and contract can be important when applying Bollinger Bands to measure when an index may be overbought or oversold. In fact, this is one of the more widely used applications of Bollinger Bands. But it’s by no means foolproof.

Generally, investors define an overbought condition when an index moves above the upper band. Conversely, an index may be oversold when it moves below the lower band. But here’s the catch: An index can remain overbought or oversold for an extended period of time. For example, take a look at the NYSE Arca Biotechnology Index ($BTK) earlier this year in January in figure 3.

The $BTK dropped below its lower Bollinger Band in January and continued trending lower into mid-February. Chart source: tdameritrade.com. For illustrative purposes only. Past performance does not guarantee future results.

The $BTK reached an oversold condition, defined by the fact that it fell below its lower Bollinger Band, in early January 2016. Yet the index continued to fall for several weeks into mid-February before stabilizing and rebounding. The Bollinger Bands were expanding during early January, responding to the increased volatility in the $BTK.

To this point, take another look at the $BTK in figure 3 and notice how it respected the Bollinger Bands from March up through early August as the bands contracted. Through this time period, generally when the $BTK fell to its lower band and become oversold, it subsequently rebounded. Conversely, when the $BTK rose to its upper band and became overbought, it paused and pulled back.

Log in and practice identifying overbought and oversold »
Print

Where’s the Momentum? Put VWAP to the Test 5 min read Mapping Out an Entry and Exit Plan: When to Buy & When to Sell Stocks 4 min read Indicator Throw Down: Simple vs. Exponential Moving Averages 3 min read