How To Trade Futures In 3-D: Basis Trading

Basis trading is a third dimension open to aspiring futures traders to trade without speculating on direction, working with the gamut of futures products.

Futures can be a straightforward and capital-efficient way to either speculate or hedge. You think the price of corn is going higher? Buying a /ZC corn futures contract is an easier way to lay a bet than buying a corn farm and growing your own. How about a short-term hedge on a big S&P 500 stock portfolio, just ahead of a Fed announcement? /ES S&P 500 futures fit that bill. Just like stocks, futures can be long-term trades or quick scalps. But unlike stocks, futures can also offer different trading opportunities because of their basis, which few novice individual traders know about.

“Basis” is the term for the difference in futures prices in different expirations, or the cash (“spot”) price of the underlying product and the futures price. Futures prices in the various expirations are different from each other and the spot price because of the cost of carry, and the impact of supply and demand. That difference represents the basis. /ES futures, for example, have contracts that expire in March, June, September, and December. /ZC corn futures have contracts that expire in March, May, July, September, and December. /ZB bonds, /GC gold and, /CL crude oil futures have their own set of expirations.

In a word, basis trading is buying a future in one expiration month, and selling it in a different expiration month—like selling the March /ES and buying the June /ES. It’s sort of like intermarket pairs trading, but with near 100% correlation. You’re speculating on the basis increasing and widening, or decreasing and narrowing. Because the two futures are based on the same underlying (e.g. S&P 500, Treasury bonds, crude oil, etc.), they are highly correlated. They tend to move up and down at the same time. But when they don’t move at the same time, or by the same amount, the basis changes.

Because the basis can be negative, where the price of the further expiration future is lower than the price of the nearer expiration future (also known as “backwardation”), it’s important to know which way you think the near-term future may move, relative to the back-month future. Some futures like /ES are regularly in backwardation, so the basis widening means it becomes more negative. If you thought it would widen, you might consider buying the near-term future and shorting the back-month future (e.g., you’d buy March /ES and short June /ES).

4 Steps To Getting Basis

To trade basis, you have to see basis. With that, thinkorswim® has you covered.

1. On the Trade tab of thinkorswim®, you can see the available futures expirations by typing the root symbol (e.g. /ES) and selecting “All” from the dropdown menu.

3. Click the arrow next to one of the futures to expand the basis price, which is the further (or back) expiration, minus the nearer expiration.

4. From the basis price you just opened up, you can chart basis by right-clicking the “=” before the futures symbol, and following the click path “More info…” >TOS Charts >upper-left square in the chart grid menu.

FIGURE 1: Source: thinkorswim by TD Ameritrade. For illustrative purposes only.

Basis Trading In the Real World

You may consider the futures basis because they can be traded by themselves, kind of like stocks pairs trades. For example, maybe you don’t have a bullish or bearish bias on the futures’ underlying product itself. But considering the futures basis, you think it might move higher or lower.

Trading the futures basis also has potential advantages over stock pairs trading. First, the contract and tick size are the same for a given future. You don't need to adjust the quantities of the trade to account for different contract specification. Second, the margin requirement for the basis trades can be lower than for a single long or short future because the basis trade is simultaneously long and short futures. The basis tends to have smaller price changes than the individual future would. So the margin requirement is also smaller.

Crude Oil (/CL)
Crude oil futures contracts typically go out a couple of years. They’re one of the most liquid, actively traded futures contracts, and the basis can move around a lot. To understand why, think about how crude oil gets turned into gasoline and other “stuff.” It gets pumped out of the ground and transported to a refinery, and that costs money. If the oil is stored, there are insurance and storage fees, as well as interest charges if you’re borrowing money to buy it.

S&P 500 Index (/ES)
One of the most widely watched and actively traded futures is the /ES contract based on the S&P 500 stock index. /ES trades until 3:15 p.m. CT during “regular” market hours. The price of /ES is based on the value of the stocks in the S&P 500 (which is the SPX index), and the cost to carry the portfolio of those stocks. There is an interest charge to borrow money to buy shares. The interest is offset by dividends that are paid by the S&P 500 stocks.

The net impact of interest and dividends determines the basis between the / ES and the SPX. Nowadays with interest rates low relative to dividends, /ES futures are usually in backwardation, and the basis doesn’t fluctuate much. But because S&P 500 stocks stop trading at 3:00 p.m. CT, so, too, does the price of the SPX stop updating. And in the 15 minutes between 3:00 p.m. and 3:15 p.m., when the /ES continues to trade, it can move higher or lower than what the basis calculation would suggest based on news that arrives after 3:00 p.m., or on the opening of large positions in /ES in the last 15 minutes of trading that anticipate the next day’s price movement.

If the /ES to SPX basis is $-10, when the /ES moves up relative to where SPX closed and makes the basis $-8, for example, that can signal a stronger open the next day. If / ES moves down relative to the SPX closing price to make the basis $-12, that can signal a weaker open the next day. Looking at the /ES to SPX basis before and after 3:00 pm can give you a clue as to the next day’s opening price action. This may impact stop orders, and even technical indicators you might be tracking.

You can’t trade the VIX directly, and /VX futures are a way to speculate on the direction of volatility. But /VX futures are only modestly tied to the VIX. “Modestly” because /VX settles to the VIX settlement value at their expiration. But there isn’t any cost of carry between the VIX and /VX futures be- cause you can’t buy the VIX like you can buy crude oil or a stock portfolio. That makes /VX futures pure indications of how much future volatility the market anticipates. The basis you see between the near and further month in /VX futures reflects whether the market sees more volatility near term or longer term.

Figure 2 charts just this scenario, when a market dropped and pushed volatility higher, and the /VX basis became negative. 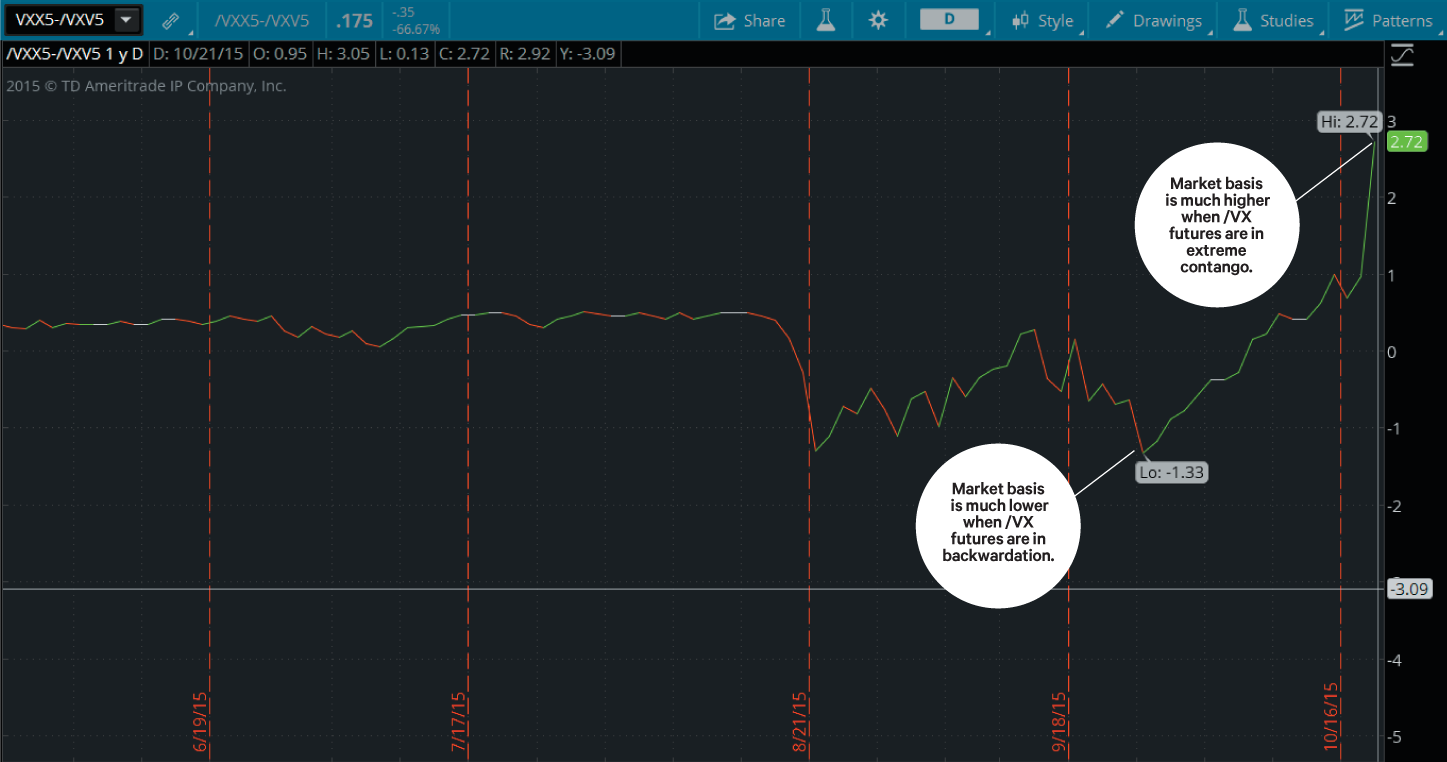 To view basis on /VX, you have to enter it manually as a pair (i.e., longer-term future minus shorter-term future, or /VXX5-/VXV5 as shown above). Most of the time, /VX futures are in contango, as was the case prior to August in the chart. Source: thinkorswim by TD Ameritrade. For illustrative purposes only.

At the closing bell, /VX basis trading isn’t for the faint of heart. If you’re already a proficient futures trader, consider this another tool in the strategy toolbox. But even if you’re not ready to trade it, /VX basis can certainly offer you clues as to how the market is forecasting volatility.

For qualified accounts, you’ll need Level 3 options approval to trade futures. Log in to your account at tdameritrade.com. Under the Trade tab, go to Futures & Forex for more information.