Making profitable adjustments to your stock portfolio can be tough. Learn more about three important metrics you can use to manage your investments. 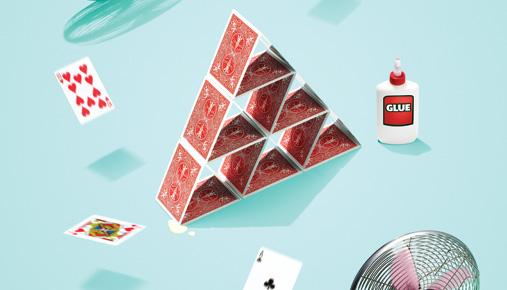 Stock, bonds, cash—that’s an investor’s standard menu. You put, say, 70% of your money in stocks, 20% in bonds, and 10% in cash. The assumption is that stocks and bonds are somewhat uncorrelated, meaning they don’t move up and down at the same time. If stocks crash, bonds might go up, and vice versa. And cash will just stay cash. You make adjustments to the percentages depending on your market outlook. Maybe you do that every month, or every quarter, or less often. And you think you and your portfolio are set. But then, correlation happens.

Think back to 2008, when stock prices crashed. Bonds moved up initially as stocks dropped, but then bonds dropped, too. When bonds drop at the same time as stocks, they’re not a great hedge. Sure, you could have sold bonds when they peaked and reallocated into cash, but who has that foresight? Being able to catch the right side of big moves can be as much a matter of luck as skill. And if you’re adjusting your percentage allocations every few months or years, are you nimble enough to take advantage of potential shorter-term opportunities?

A trader might have an approach that adds agility to her portfolio. No, we’re not saying you, the investor, should turn into a trader. Rather, analyze what a trader does so you become a more informed investor. The trader’s three primary concepts to manage a portfolio—delta, capital requirements, and return on capital—are what you might like to consider. Let’s see how.

Delta is the amount an option’s price changes when the underlying stock or index moves $1. But that delta can be extended to your entire portfolio through beta-weighting on the thinkorswim® platform from TD Ameritrade. Beta-weighting converts deltas of individual positions into beta-weighted deltas in some common unit—like the S&P 500—so you can look at your portfolio’s risk from an “apples-to-apples” point of view (even though it contains grapes, oranges, and pears).

Like an investor, a trader will look at the total beta-weighted delta of her portfolio to assess overall risk. But she’ll also look at each position’s delta to see if one is much bigger or smaller than the others. That could indicate excess risk in one security where she doesn’t want it.

Say you have 300 shares each of various stocks. But the deltas have been beta-weighted to the SPX, which shows that in SPX terms, FAHN has more deltas than GVRC. A trader might decrease the deltas in FAHN by selling some shares, buying a collar (buy a protective put, sell a covered call), or selling covered calls. Or she might increase the deltas in GVRC by buying shares or shorting puts.

Having relatively balanced beta-weighted deltas could help diversify your positions and potentially reduce unsystematic risk. Traders never know which trade could be a loss, and they don’t want an oversized position to take them down. Investors probably don’t want that either.

It’s Great to Have Funds

To execute a trade, you need a certain amount of capital (i.e., money) in your account. How much capital you need depends on the trade(s) and type of account you have. Some trades in certain underlying stocks have bigger capital requirements. Some have less. Explore how much capital an individual position requires on the Position Statement section of the Monitor tab on the thinkorswim platform.

The BP effect, or buying power effect, is the impact a position has on an account’s available trading capital, or buying power (Figure 1). With naked short option positions, the BP effect is negative, and it’s easy to see how much capital one position is using. If you see that one position uses more capital than the others, you might consider reducing that stock’s position, or hedge it so that its BP effect is more in line with the others.

Making sure the capital requirements of your positions are relatively equal means you’ll have an idea of how much you’ll need if you want to increase an allocation into equities or bonds, or how much capital you might free up by closing certain positions.

Analyze the buying power effect of your positions so you know which may use more capital than others. Source: thinkorswim® from TD Ameritrade. For illustrative purposes only.

Return on capital is a way to think about how much a trade could potentially make relative to its capital requirements. Now, what a trade could “potentially” make is anyone’s guess. For a realistic return on capital that doesn’t depend on a stock’s direction, consider something more quantifiable, like theta, which measures an option’s sensitivity to time decay. In an options trade, theta is how much total credit you receive less transaction costs  (positive theta) or the debit you paid (negative theta) over time, all things being equal. Because time is constant, looking at return on capital based on theta can help you balance positions as you might for delta and capital requirements.

For example, say a trade that makes an estimated $10 of positive theta every day and requires $1,000 in capital has a lower return on capital than a trade making $10 of positive theta every day that requires only $500 of capital. Is it a perfect metric? No. But it lets you compare apples to apples, like beta-weighted delta. But unlike deltas, which need to be beta-weighted before you can add them together for your portfolio, you can simply add the theta of individual positions together to get a total theta. (One day passing is the same for every position, and theta is expressed as the dollar change in value, per one day passing.)

Now, capital’s theta return doesn’t mean additional cash is generated in your account. Here’s how a trader thinks about capital’s theta return. She may prefer to earn a certain percentage of her capital—say 0.01%— from theta every day. That’s $1 of theta for every $10,000 of capital requirement. If a short out-of-the-money (OTM) put position, for example, has a lower capital return than she’d like, consider the components of her calculation: theta and capital requirement. She can’t change the short put’s theta. But she can possibly reduce her capital requirement by turning it into a short put vertical. To build a short-put vertical out of an existing short put, she needs to buy a further OTM put. But which one?

On the thinkorswim platform, you’ll find the theta of each option on the Trade page (Figure 2). Look at the theta of your short put. Then look for a further OTM put with a small theta that won’t reduce the positive theta of the short put too much, but with a strike that isn’t too far away from the short put’s strike. 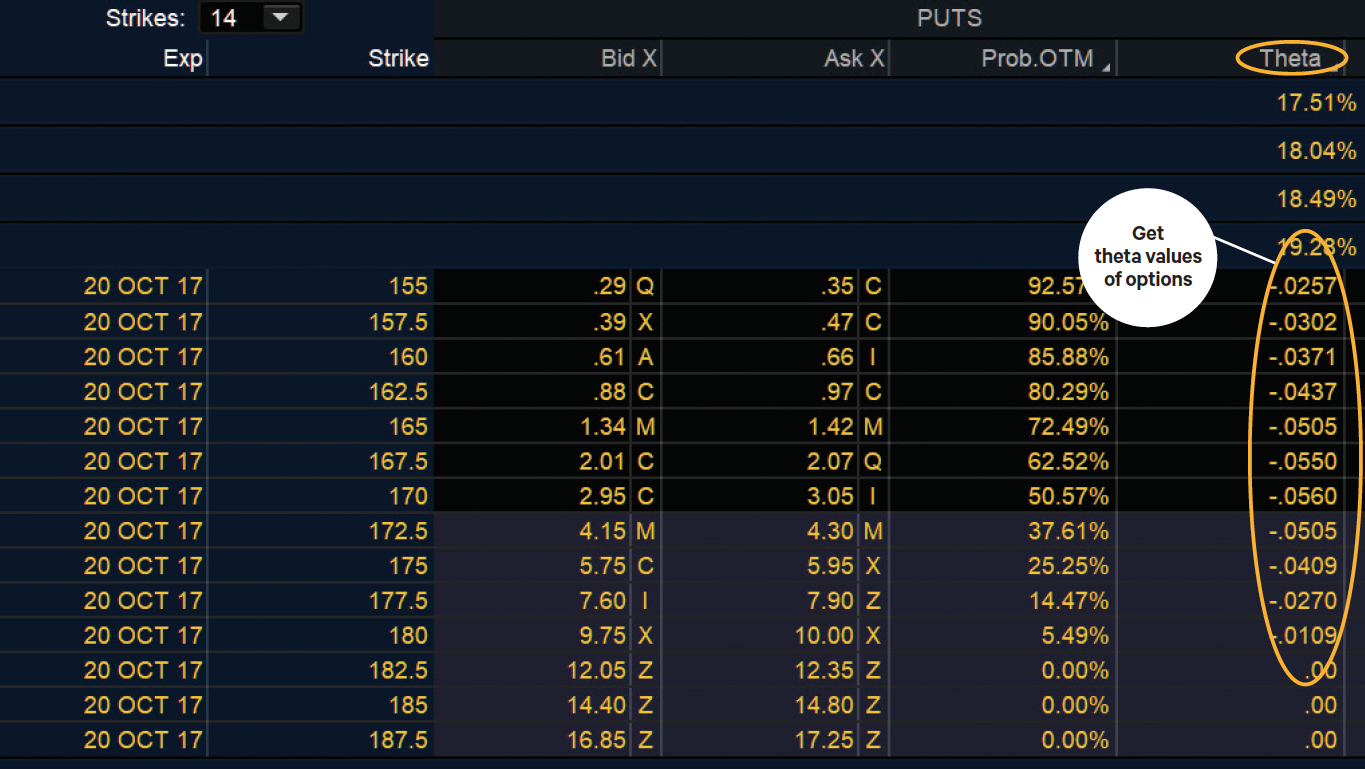 Customize the settings on your option chain from the Layout dropdown to view the theta of calls and puts. Source: thinkorswim® from TD Ameritrade. For illustrative purposes only.

If a trade is tying up your capital, you probably want it to contribute in a positive way. Having a target theta return on capital tells a trader that each position is contributing its fair share. Say the daily theta of your portfolio is $559, and the total capital requirement (BP effect) is $358,296. The portfolio’s theta return on capital is 0.156% per day. If that number is lower than your target, then you may need to reduce capital requirements. If it’s greater, you may need to reduce position size.

All these metrics—delta, capital requirements, and return on capital—can change daily. As a trader, you make daily adjustments to your overall portfolio by entering new trades and closing existing trades. As an investor, you might want to think of these metrics in terms of a range—from an acceptable low to an acceptable high. That way, daily metrics changes can fluctuate but still remain within your range.

Remember, position adjustments increase commission costs, so keep an eye on how many you make.

All these metrics are available on the thinkorswim platform. Whatever your preferences and trading style, you can still use overall percentages of stocks, bonds, and cash. But within stocks and bonds, you can add new criteria and likewise evaluate positions in terms of delta, capital requirements, and theta return on capital. And although an investor may not make daily portfolio adjustments, it’s worthwhile to check the portfolio’s metrics daily. All you have to do is log in.

Thomas Preston is not a representative of TD Ameritrade. The material, views, and opinions expressed in this article are solely those of the author and may not be reflective of those held by TD Ameritrade, Inc.