Psychology: Can Bull Markets Give You Bad Trading Habits?

Bull markets can be fun to trade in, but they sometimes reinforce bad habits that can bite traders when a bear market arrives. Here are some habits to avoid. 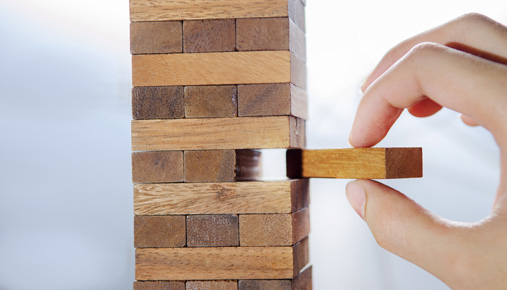 Bull markets like the one we’re in now can sometimes be like a too-permissive parent, blinding traders to their own weaknesses and reinforcing bad habits. These habits may not hurt traders while bull conditions last, but they can have major negative implications when a bear market blows into town.

We sat down with Dr. Kenneth Reid, founder of DayTradingPsychology.com, to identify a few common ways this happens and to learn his prescription for the bear market blues. "Although bull markets offer plenty of opportunities to make money, they don’t necessarily help you become a better trader," Reid warns.

The Ticker Tape: What are some of the bad habits that bull markets can create?

Ticker Tape: How do we know when we are in a bear market?

Dr. Reid: Technically, a bear market is defined as one that drops 20% from its highs. But in real life, bear markets are never telegraphed. They always come as a surprise, even to professional investors. That said, they can be difficult to spot because our biases come into play. For example, the fact that we are in an earnings recession in the S&P 500 has gotten many of the pros inappropriately bearish. It’s easy to outsmart yourself.

Ticker Tape: How can traders adapt and survive during the transition from a bull to a bear?

Dr. Reid: Volatility increases in down markets, which makes them tougher to trade … even if you have the direction right. You can’t just turn the bull chart upside down. I recommend smaller position sizes and higher time frames. Use the Average True Range on a time chart to gauge this. Also, the pace of bear markets is faster, so the speed of the moves may exceed the comfort level of the average trader and cause one to miss out on many substantial moves. The fear of missing out tends to inspire the temptation to chase. Do your best to avoid that. It’s a good time to implement Zen.

Ticker Tape: What are some strategies to succeed in a bear market trading environment?

Dr. Reid: The most important thing is to train oneself not to succumb to the habit or fantasy of bottom picking. Bull markets continuously reward traders for picking bottoms. It’s the favorite bull market pastime, and successful traders get good at it. Spotting moving average convergence divergence (MACD) at a W bottom is fun when the market is going up. But in a bear market, it is seriously counter-productive.

Ticker Tape: What is your prescription for the “bear market blues”?

Dr. Reid: It depends on what type of “blues” one has. One’s personal trading psychology can be a confusing maze. Getting a proper diagnosis might be helpful. I do offer a number of free tools for that purpose along with a free trading psychology consultation. Bull markets can put us into an investment trance. The human brain loves repetition. This is the basis for the popular kids’ game “Simon Says.” Add in the tendency among investors and traders toward herding, and market behavior becomes even more predictable and unidirectional. Since bull markets last four to five times longer than bears, the mentality associated with a unidirectional market is strongly reinforced.

Figure 1 shows how investors who get conditioned to trading in a bull market can fall into the trap of buying high and selling low due to a unidirectional mentality. As the chart shows, it can be more useful to develop a bidirectional mentality, which can potentially help position traders for success in bull and bear markets. 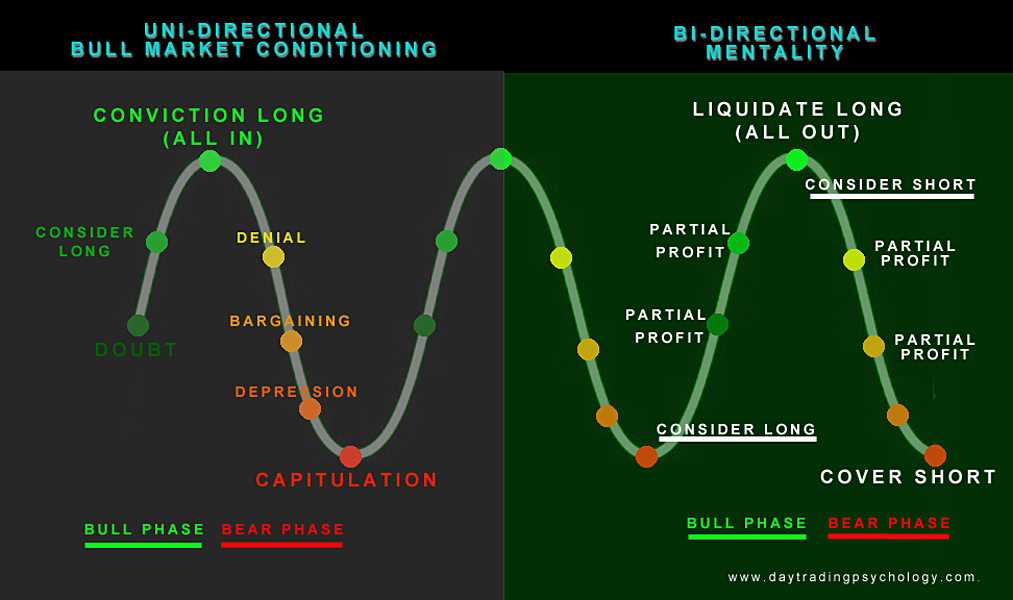 Traders conditioned only for bull market trading can often fall into traps. Traders with a bidirectional mentality can be positioned to succeed in bull and bear markets. Source: daytradingpsychology.com. For illustrative purposes only. Not a recommendation of a specific strategy.

TD Ameritrade, Dr. Kenneth Reid, and DayTradingPsychology.com are separate and unaffiliated, and are not responsible for one another's policies, services or content.