Trading Momentum Without a Chart

Picking months and strikes are big decisions for options traders. Do probabilities matter? We think so.

We’re visual creatures. We like pictures and colors. So, it’s understandable that charts are pretty attractive to investors and traders. What’s not to like? Bars and candlesticks. Trendlines and fibonacci. Momentum and moving averages. You can load up a chart with so much information hopefully it will give you a general idea about the direction of a given stock or index.

The reality is, to create a smarter strategy overall, it’s not just about the pictures. It’s about the math. While charts can be helpful, I’ve yet to have a chart master show me with absolute certainty the probability a stock or index will reach some dreamy target price. Nope, that’s math, my friend. And once you have the math right, you can pick an optimal strategy on both trend as well as probabilities.

Like powerful charts, probabilities are conveniently calculated on the thinkorswim® platform.

The goal here isn’t to talk you out of your charts. In fact, it’s to help you turn a chart’s directional bias—bullish or bearish—into a strategy based on the probability of making a profit. Quantifying the probability of a profitable strategy, or even of a stock reaching a certain price, helps you longer term make smarter decisions. And you do that by looking at the probability of a stock’s option expiring in the money or touching its strike price. [However, “touching” probability, is not a certainty, the market can be inconsistent, and can move quickly and drastically.]

In fact, no chart can tell you that. But why should you rely on probability numbers? Because they contain current market information via the option prices themselves, making probability numbers more responsive to changes in volatility and time. Remember, the more volatile the stock, or the more time to expiration, the more likely a large price change. Market makers make out-of-the-money option prices more expensive to reflect this. All else equal, higher option prices mean higher implied vol, which feed directly into the probability formula.

In this way, it’s not just your opinion of a stock’s chart that should go into a strategy. It’s the market’s collective wisdom.

A Picture’s Worth a Thousand Trades

Visualize this with the “Probability of Expiring Cone” on the Analyze tab, under the Probability Analysis subtab (see Figure 1). This feature points to future dates, revealing the range encompassing one standard deviation of potential stock prices. That’s geek-speak for a 68% likelihood of price action staying within that range before expiration. 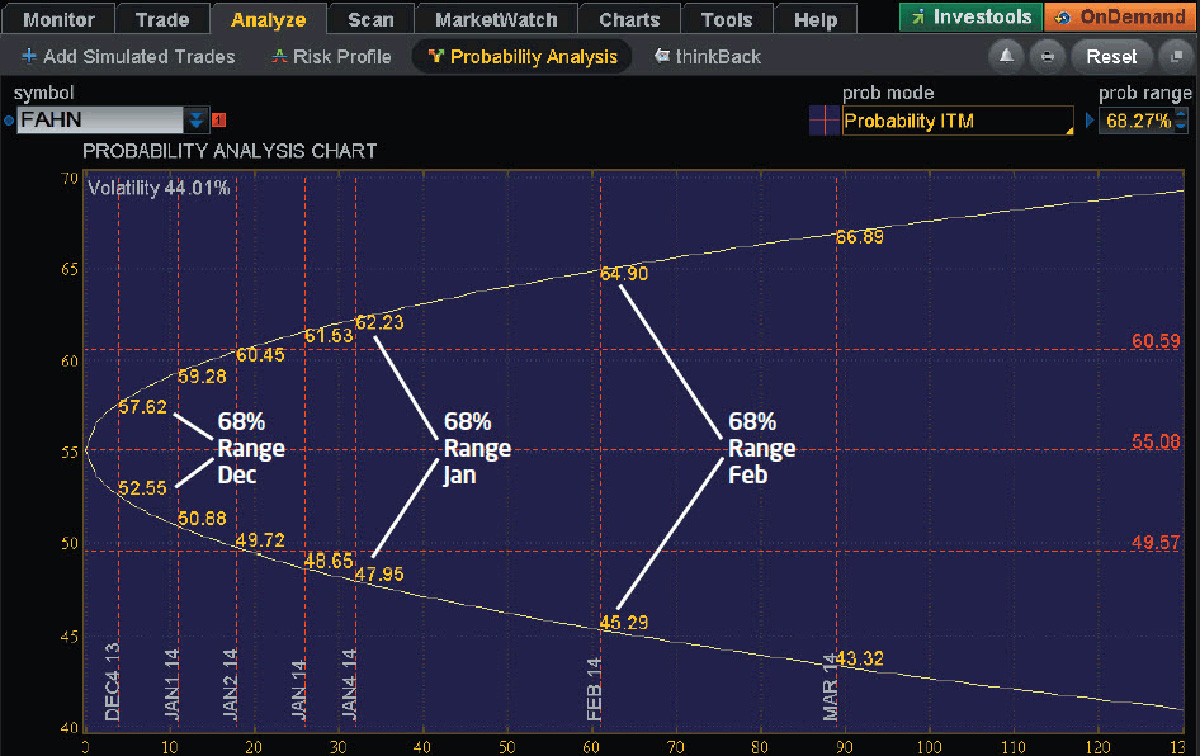 FIGURE 1: A ONE-TWO PUNCH. Inserting a probability cone to the right of your thinkorswim Chart helps you determine trend as well as which strategy to employ. For illustrative purposes only.

You can edit the “Probability of Expiring Cone” study to show a different probability range, say 68%, 95%, and 99%. The prices where the cone intersects with future expiration dates are the upper and lower boundaries of the stock price’s theoretical range for that probability number. The further out you look, the wider the stock’s potential price range.

Despite formal textbook definitions, traders tend to see strike prices differently. Strike prices above and below a current stock price are like boundaries—levels the stock price may or may not reach in the future. Looking at the probability numbers on the Trade page at different strike prices and for different expirations, you can see what the market thinks of a probability that a stock price will either stay inside, or move beyond, a particular strike price. And knowing the probability can help you develop a more confident strategy relative to your directional bias. At the end of the day, it’s easier to make sense of options with a few handy guidelines, to wit:

For debit strategies that rely on a favorable movement in the stock look for a balance duration of 30-to-60-days to expiration. This might give the stock time to move enough so the strategy might become profitable. More time than 60 days gives you more duration, but your trade might not change in price much when the stock price changes. Less time to expiration can give you a more responsive debit strategy, but there isn’t as much time for the stock price to make a favorable move.

Step Two: Pick the strike price After narrowing down expirations, narrow down the strike prices. You may consider looking for out-of-the-money (OTM) calls and puts that have about a 68% probability of expiring worthless. That number is available on the Trade page as the “Probability OTM” field in the Customize choice in the Layout menu (Figure 2). “About” 68% might be 64% on the low side and 72% on the high side, for example. A 68% probability OTM means theoretically the option will expire worthless 68% of the time. This means, if you had shorted that option, theoretically 68% of the time you would keep the option’s premium, less transaction costs, as profit by expiration. Of course, 32% of the time the short option could lose money, so it’s not a trading strategy in and of itself and nothing is guaranteed.

FIGURE 2: Probability layout from the Trade page reveals both a call and put that are just “about” 68% likely to expire worthless. For illustrative purposes only.

Just looking at the “Probability of Expiring” numbers for strikes at levels important to you from your chart analysis, you can get a sense of market sentiment regarding the likelihood a stock might be above or below a price at expiration. If you add the “Probability of Touching” column on the Trade page, that further shows market sentiment of the likelihood a stock price trades at the strike price at any time between a given moment and expiration.

Step Three: Choose a strategy. Finally, create a trading strategy the combines your directional bias from both charts and probability numbers on the trade page. You can do this by comparing other options to the option at the strike that has about a 68% probability of expiring worthless and between 30-and-60 days to expiration.

If you have a bullish bias, maybe you’d look at a short OTM put vertical, a bullish option strategy that loses money when the stock drops a lot, but can make money if the stock goes up, stays the same, or even drops by a small amount.

Confirming Your Suspicions Without the Math

Using open-interest confetti charts (Figure 3 below) in thinkorswim®, you can see where the greatest number of open contracts are clustered—where other traders are placing their trades. Keep in mind, this has less to do with the absolute math, and is a more discretionary method, but can be a helpful indicator with your charts and probabilities from a high-level view.

Go to the Product Depth section in the thinkorswim Trade page, and choose "Open Int." in the Value drop-down. 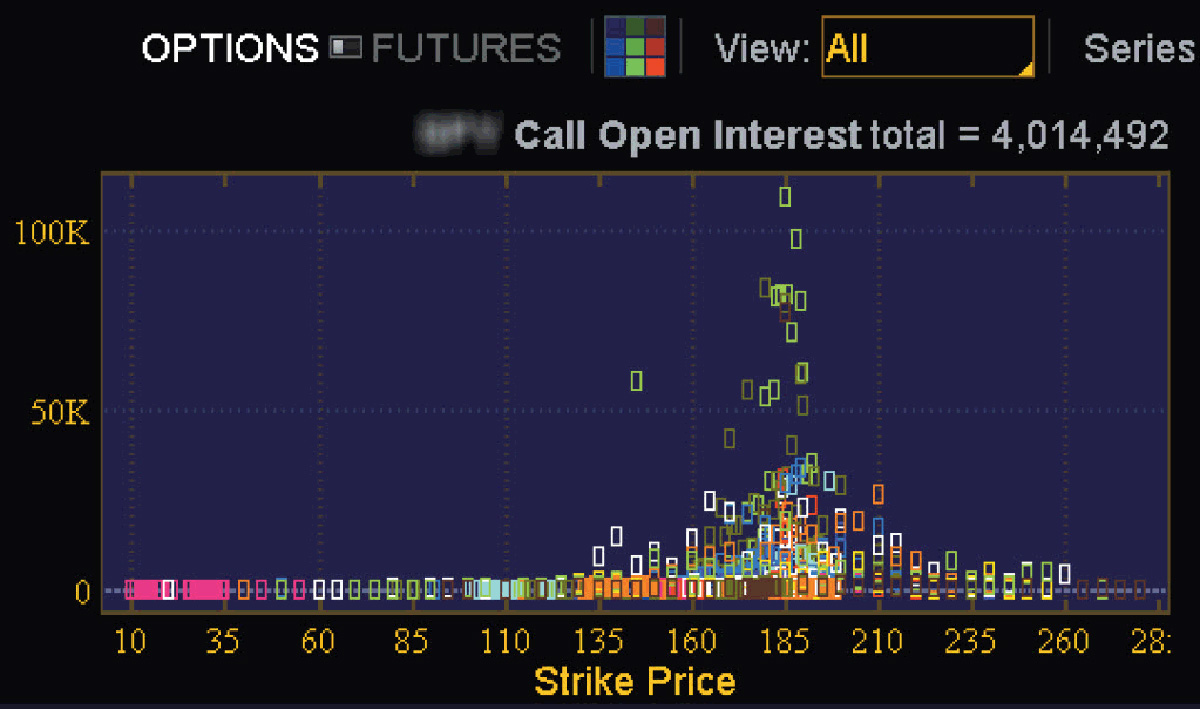 FIGURE 3: CONFETTI CHARTS ON THINKORSWIM. In the picture above, note the greatest concentration of open-call positions is around the 185 strike. This could be helpful when deciding where to center the option strikes in your trade. For illustrative purposes only.

Spreads, condors, butterflies, straddles, and other complex, multiple-leg option strategies can entail substantial transaction costs, including multiple commissions, which may impact any potential return. These are advanced option strategies and often involve greater risk, and more complex risk, than basic options trades. Be aware that assignment on short option strategies discussed in this article could lead to unwanted long or short positions on the underlying security.

Options transactions involve complex tax considerations that should be carefully reviewed prior to entering into any transaction.The risk of loss in trading securities, options, futures and forex can be substantial.

Trading foreign exchange on margin carries a high level of risk, as well as its own unique risk factors. Before considering trading this product, please read the Forex Risk Disclosure. A forex dealer can be compensated via commission and/or spread on forex trades. TD Ameritrade is subsequently compensated by the forex dealer. Futures and forex accounts are not protected by the Securities Investor Protection Corporation (SIPC). Product and company names mentioned herein may be trademarks and/or registered trademarks of their respective companies.