Want to Monitor Sentiment from Key Influencers? Get Social

Learn why using a social media monitoring app such as LikeFolio can help you monitor sentiment. 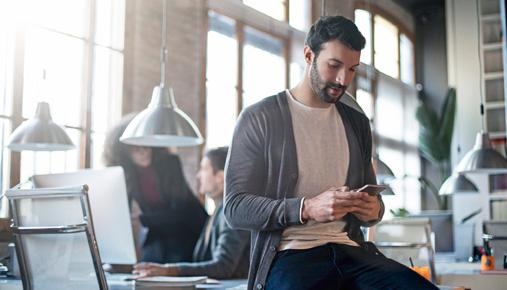 What do these three very different groups of people have in common? All of them can influence the markets and individual stock prices with their social media posts.

Think back to late last year when then President-elect Donald Trump tweeted, “The F-35 program and cost is out of control. Billions of dollars can and will be saved on military (and other) purchases after January 20th." Shares of Lockheed Martin (LMT), which manufactures the F-35s, dropped immediately, (though shares subsequently rebounded). See figure 1 below.

Trump’s tweet grabbed the headlines, but a lot of stuff on social media doesn’t necessarily fly as high on the radar. Now, LikeFolio offers an online social sentiment app that does the social media monitoring for you, letting you select key influencers to follow in real time on your mobile device so you never miss their impact on your stocks.

“To put it simply, social media activity can potentially impact the stock market; both individual companies and entire stock indexes,” said Patrick Smith, senior manager of trader and education marketing at TD Ameritrade. “Sometimes a social media post can move shares of a stock dramatically within minutes, before the news becomes widespread, making it helpful for investors to have this information immediately.” 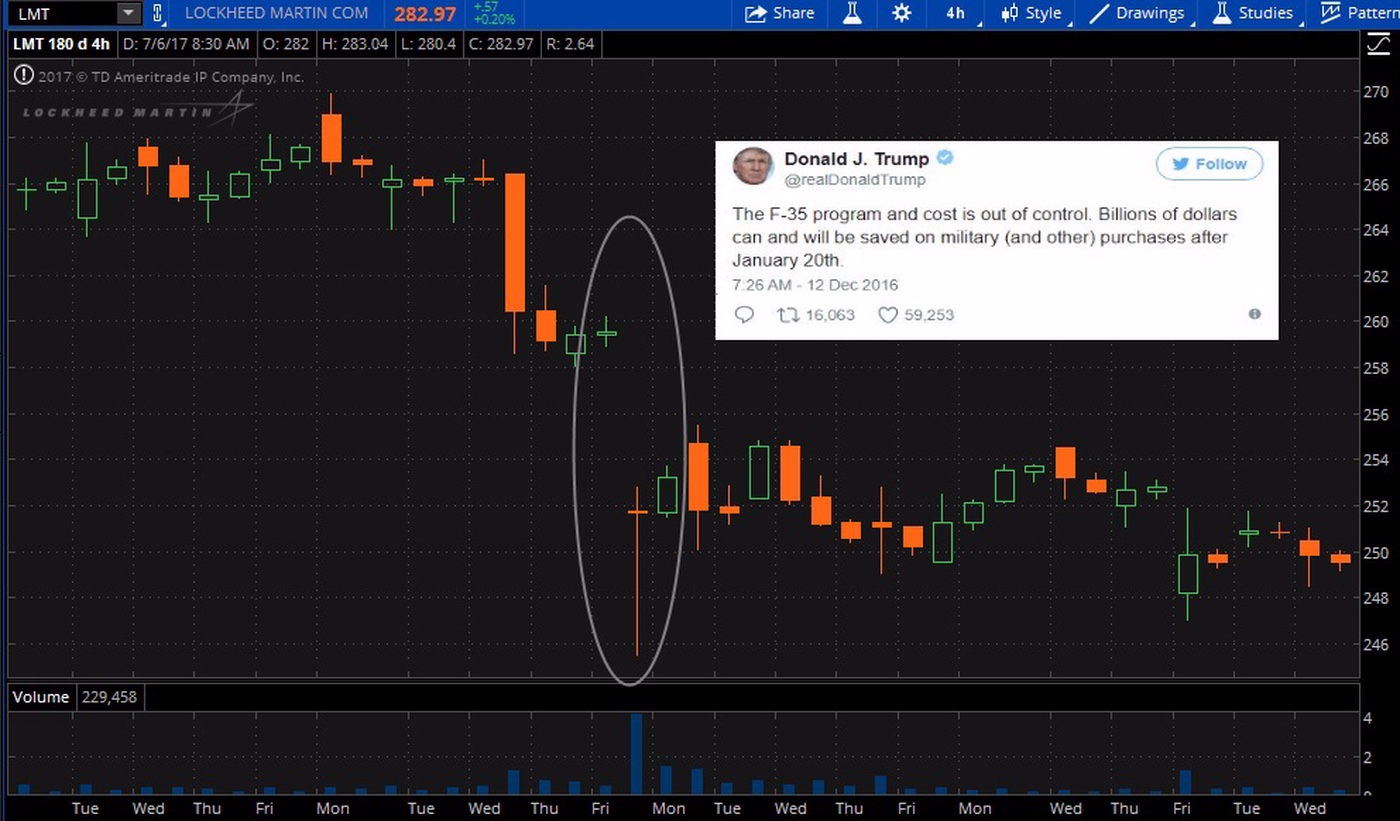 A December 12, 2016 tweet by President-elect Donald Trump sends shares of Lockheed Martin down about $14 a share, though shares later recovered. Data source: Twitter, S&P Global. Chart source: The thinkorswim® platform from TD Ameritrade. For illustrative purposes only. Past performance does not guarantee future results.

You may have heard of crowdsourcing, which some investors now use to collect information from the masses of people on the Internet. LikeFolio also scours the Internet for information, but in a different way.

“The app is pretty simple; it allows you to follow key influencers that impact markets, and or their specific companies,” Smith said.

Once you download the app, you can choose from a long list of key influencers, along with the stock symbols you want to monitor. Politicians, CEOs, and news personalities are certainly well represented, but so are others with the power to move stocks, including popular culture icons. You can also choose to monitor a media outlet rather than an individual, so that, say, when a major newswire mentions your company in any of its online channels, you’re informed.

The app can also put you in the front row for online arguments like the one between high-profile investors Bill Ackman and Carl Ichan last year regarding Herbalife (HLF), an example of which is shown in figure 2 below. You’d never miss a punch or a counter-blow. 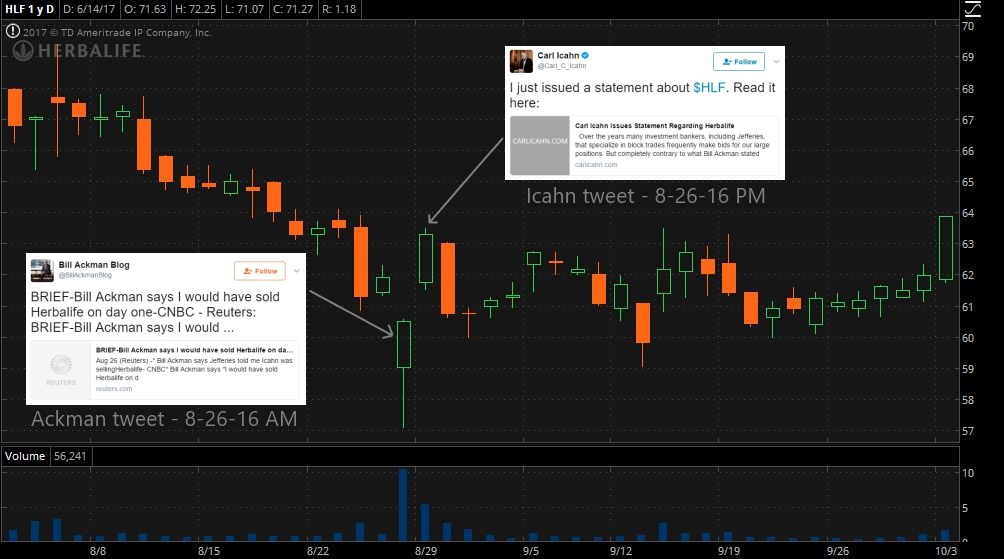 An Ackman post regarding Icahn’s positions in HLF sent shares sharply lower. Icahn’s rebuttal, issued near the close of the trading day, sparked a rally that lasted into the following trading day. Data source: Twitter, S&P Global. Chart source: The thinkorswim® platform from TD Ameritrade. For illustrative purposes only. Past performance does not guarantee future results.

Some investors might ask why they should care. There’s a lot of noise in the social media world, and not all of it affects markets. It’s also possible to sometimes get too caught up in social media, as anyone with a teenager at home probably already knows.

On the other hand, there are numerous examples besides Trump’s tweet about LMT where individual stocks or the market as a whole moved based on a social influencer, and investors today might find themselves handicapped if they don’t have a way to monitor this buzz. In 2013, for instance, a fake tweet from a major newswire caused a 147-point drop in the Dow Jones Industrial Average ($DJI) followed by a 126-point rebound, all within seven minutes. On another occasion, Apple (AAPL) gained $17 billion in market cap within minutes after an influential investor tweeted he owned a large position.

Many well-informed investors already have begun equipping themselves with the tools to keep an eye on developments like these. The LikeFolio app is a way to attempt to make sure you’re not left out of the loop the next time a tweet puts the focus on one of your stocks.

Here's How to Download the App and Get Trading

Posts presented in the Likefolio app are not subject to any fact-checking, may be without reasonable basis and claims may be unsubstantiated. Thoroughly evaluate all information before trading

The social data discovery, filtering and analysis discussed in this article are provided by SwanPowers, LLC’s Likefolio. SwanPowers and TD Ameritrade are separate and unaffiliated firms.

We also invite you to read this Investor Alert: Social Media and Investing: Avoiding Fraud published by the SEC.