How Technological Breakthroughs Are Changing Aging 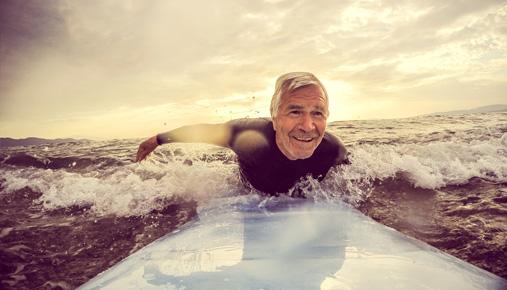 Technology is changing the face of aging, as the consumer market and products designed for the elderly begin to overlap.

As little as 10 years ago, assistive products for seniors—such as wearable devices to monitor for falls—were ugly and carried a bit of a stigma.

“A lot of those devices were designed in a (lousy) hospital-themed way, and people didn’t want to use them that much. There was a tendency to push clinical frameworks on seniors when these people were just living their lives. They were always putty-colored and had some horrible user interface designed for someone in a bed,” said Thomas Kamber, executive director of the New York–based Older Adults Technology Services.

Now devices that anyone can use are replacing those purely assistive ones, like the Fitbit (FIT), which can replace a frumpy heart rate monitor, and apps like MyFitnessPal that can help keep seniors active.

Kamber and Stephen Ewell, executive director, Consumer Technology Association Foundation (CTA Foundation), said the advent of smartphones and tablets and the rise of apps were key to the change. As Wifi-enabled homes became standard, it ushered in this new consumer technology market.

According to a 2016 study by the Consumer Technology Association (CTA), the U.S. market for active-aging technology encompasses 85 million Americans. The active-aging market, which consists of both seniors and their family caregivers, represented a $24.4 billion market opportunity in 2015 and is expected to grow to $42.7 billion in 2020, CTA said.

Technology empowers seniors to stay in their homes longer, as smartphone apps make it easier to control devices like lighting or locks. There are definite economic incentives for aging at home, too, the CTA said. “The high cost of institutional long-term care services makes the option of aging at home more financially appealing, among other factors,” CTA said.

It’s still early days for seniors and technology, especially “smart home” and other Wifi-connected technology like doorbells and thermostats, and Kamber said so far the adoption rate is low. Seniors still question the relative advantage over something like controlling lights from their phone versus walking over to turn on the switch. They also have concerns about privacy and whether the technology will break down or become obsolete. However, as technology improves and more seniors become comfortable with the devices, adoption rates may rise.

A lot of consumer technology comes from start-ups, but big publicly traded firms with a footprint in the smart-home arena are no big surprise—Google parent Alphabet, Inc. (GOOG) and Amazon (AMZN). Both companies own smart speakers, Google has Home and Amazon has the Echo, while Google also owns Nest, the popular smart thermostat. Of course, so much depends on smartphones, which brings in Apple (AAPL), which also has the Apple Watch to rival the Fitbit, and its competitor, Samsung.

But they’re not the only ones. Koninklijke Philips (PHG) makes popular smart light bulbs and other lighting. Wifi connectivity is important, so companies like Netgear (NTGR) make networking products, including routers and a highly rated consumer security camera, that fall into that category.

As the population ages, and as technology continues to develop and become ever more convenient, it’s likely the fields of consumer technology products and assistive products will overlap even further, making the golden years even brighter.