Recent college grads shared their take on financial expectations versus reality, as well as money mistakes they made they don’t want new freshman to make. 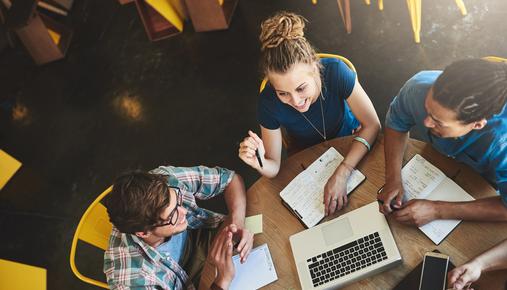 Once they are out in the job market, many college graduates look back and wish they had done a few things differently, according to young millennials and teens who were surveyed about their financial habits and attitudes. Some of the most insightful information came from recent college grads, who shared their take on financial expectations versus reality, as well as money mistakes they made that they don’t want their younger counterparts to repeat.

Practical Tips for the College-Bound

#1. Major matters. Too bad there’s no crystal ball to look ahead four or more years and see what the job market and economy will be doing. But incoming college freshman should evaluate their career goals, stay in tune with their passions and assess the lifestyle they aim to have in the future. All of these things, along with their learning aptitudes, will help shape the majors they pursue. Unfortunately, many recent college grads say they wish they had picked different majors now that they are in the job market. Twenty-nine percent listed their program of study as a financial regret, and one in five (22 percent) would have chosen a major in a higher-paying field. This is really the whole reason students attend college, so being extra conscientious now can help to avoid disappointment later.

#2. Be book smart. Three in 10 (30 percent) say they wished they had bought used books instead of new ones. According to the National Association of College Stores, the average price of a new textbook increased from $57 in 2007 to $82 in 2014. And that’s the price for just one textbook. Used book prices have risen over time too, but not nearly as much (from $49 to $59 over the same time period). Either way, students should remember to sell textbooks they don’t need to keep long term, whether online or through the campus bookstore, to recoup some money.

#3. Leave the car behind. Some campuses do not permit college freshman to have cars on campus as a way to encourage them to explore and integrate themselves into their new environment. And if a school does allow cars, students are often looking at a hefty price tag for a parking permit. According to College Secrets author Lynnette Khalfani-Cox, “You can generally expect to shell out about $500 to as much as $1,000 for yearly parking on many college and university campuses.” There’s really no better time to use public transportation, campus trams, bike rentals or ride-sharing services.

#4. Get a job. Already? Well... kind of. Get a flexible job. Nineteen percent of recent college grads say they would have earned money while in school if they could do it all over again. Many on-campus jobs either qualify as work-study programs or are flexible enough that student employees can squeeze in some homework. A mere 12 percent of young millennials say they took part in a work-study program. On-campus jobs can be quite enjoyable; there are opportunities to be a barista, tutor, library attendant, campus tour guide, yoga instructor, lifeguard and more.

#5. Spend less and borrow less. Recent college graduates are warning undergrads to watch their debt and spending. Twenty-four percent surveyed said they would spend less money and accumulate less debt. One way to do this is to evaluate the different types of colleges and select the one that’s the right fit. Tuition and room and board are the biggest line items for college freshman, so selecting a more affordable option can make a big impact. Stephanie Q., an 18-year-old from the Chicago suburbs, is a freshman at the University of Illinois this fall. “Everyone in my circle of friends is heading straight to college, whether it be a big-name school or community college,” she says. “I’ve definitely noticed that community colleges are getting way more popular. It’s seen as a way to get the basics out of the way more cheaply before transferring to a four-year college or university.” 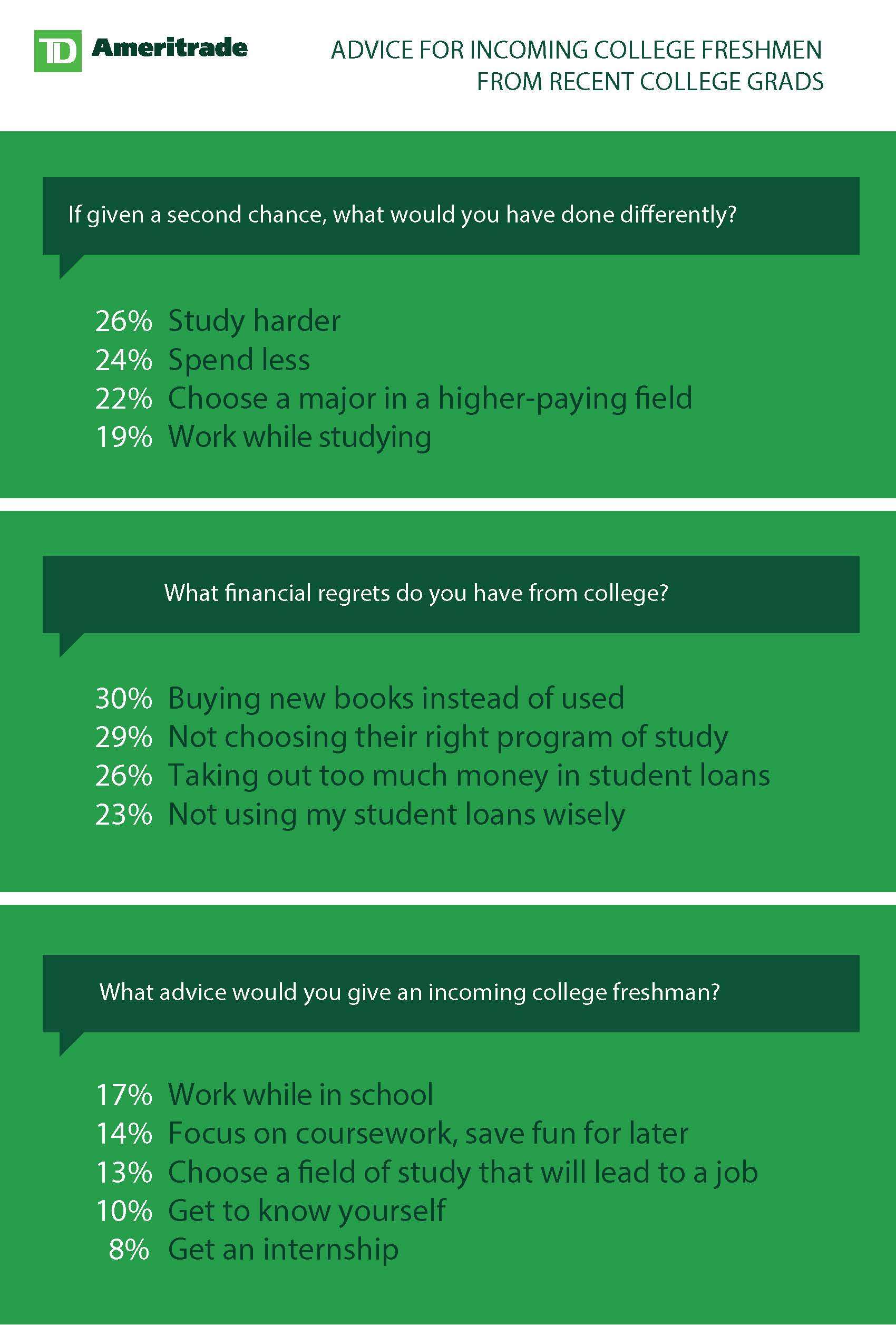 About the 2017 Young Money Survey: A 15-minute online survey was conducted between March 17 to 22, 2017 on behalf of TD Ameritrade Holding Corporation. The statistical margin of error for the total sample of N=2,001 American teens and young millennials within the target group is +/- 2.19 percent. This means that in 19 out of 20 cases, survey results will differ no more than 2.19 percentage points in either direction from what would have been obtained by the opinions of all target group members in the United States. Sample was drawn from major regions in proportion to the U.S. Census.

It’s also important for parents and teens to keep an open, honest dialogue about financial expectations leading up to college. Although it’s never too early to start, the teenage years are a prime time to begin prepping for the realities of college—financial and otherwise.

Parents can learn more at TD Ameritrade’s saving for college website and determine which savings plans might be right for them and their children, including 529 College Savings Plans, Coverdell Education Savings Accounts and custodial accounts. Remember that the college years are the launching point for life as an adult. Setting up a solid, well-planned foundation during this time will have a lasting impact.

Retirement Budget Planning: 9 Simple Steps to Consider 4 min read How Much of an Emergency Fund Do You Need Once You Retire? It Depends 4 min read How to Save Money: Six Tips to Help Stash Cash 2 min read

TD Ameritrade and all third parties mentioned are separate and unaffiliated, and are not responsible for one another’s policies or services.