Homebuilders and housing-related companies had a strong 2017 and outperformed the S&P 500. Will the trend continue heading into Q4 earnings reports? 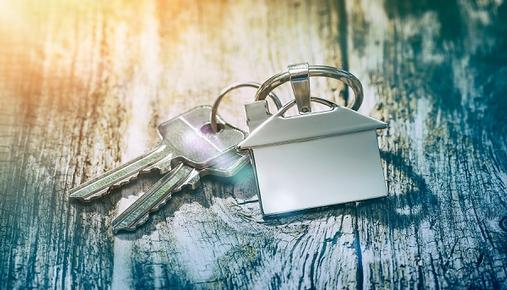 2017 ended up being a banner year for many housing-related stocks including homebuilders and home improvement retailers. There were several different macroeconomic factors at play in the U.S. housing market that contributed to the outperformance of housing-related companies last year.

So far for 2018, many economists and analysts have said they are expecting more of the same in terms of overall economic growth, the labor market, tighter inventories and rising home prices, some of the major factors at play in the housing industry.

The State of Housing

In the wake of hurricanes and other natural disasters last year in the U.S., there was uncertainty regarding how those events would impact the broader U.S. housing industry as focus shifted to rebuilding in certain markets, material costs spiked and labor scarcity concerns grew due to increased demand for construction workers in areas impacted by natural disasters.

The overall disruption seemed to be somewhat short-lived from recent economic data reports, however, the impacts of hurricane rebuilding are expected to continue into 2018.

Looking at the most recent data, November existing home sales surged to their strongest pace in over a decade, coming in at a 5.6% month-over-month increase, significantly higher than the 0.9% increase that consensus forecasts called for. Sales in the single-family segment rose 4.5% month-over-month, while condo/co-op sales rose 14.3%.

Homebuilding also accelerated in November and housing starts increased to 1,297k, surpassing analyst’s expectations that activity would moderate to 1,250k. Building permits came in higher than expected at 1,298k. New home sales also came in well above expectations in November, climbing 17.5% to a seasonally adjusted rate of 733,000 units.

Even before the U.S. hurricanes, inventories were tight in the U.S. and economists have indicated they widely expect that trend to continue in 2018 as economic growth and unemployment aren’t forecasted to deviate too much from this year’s results. Single-family housing starts and permits have been accelerating, but the average completion time of a single-family house is around 7 months, according to the Census Bureau’s Survey of Construction, and that can vary significantly depending on factors like weather, size, finishes, and more. 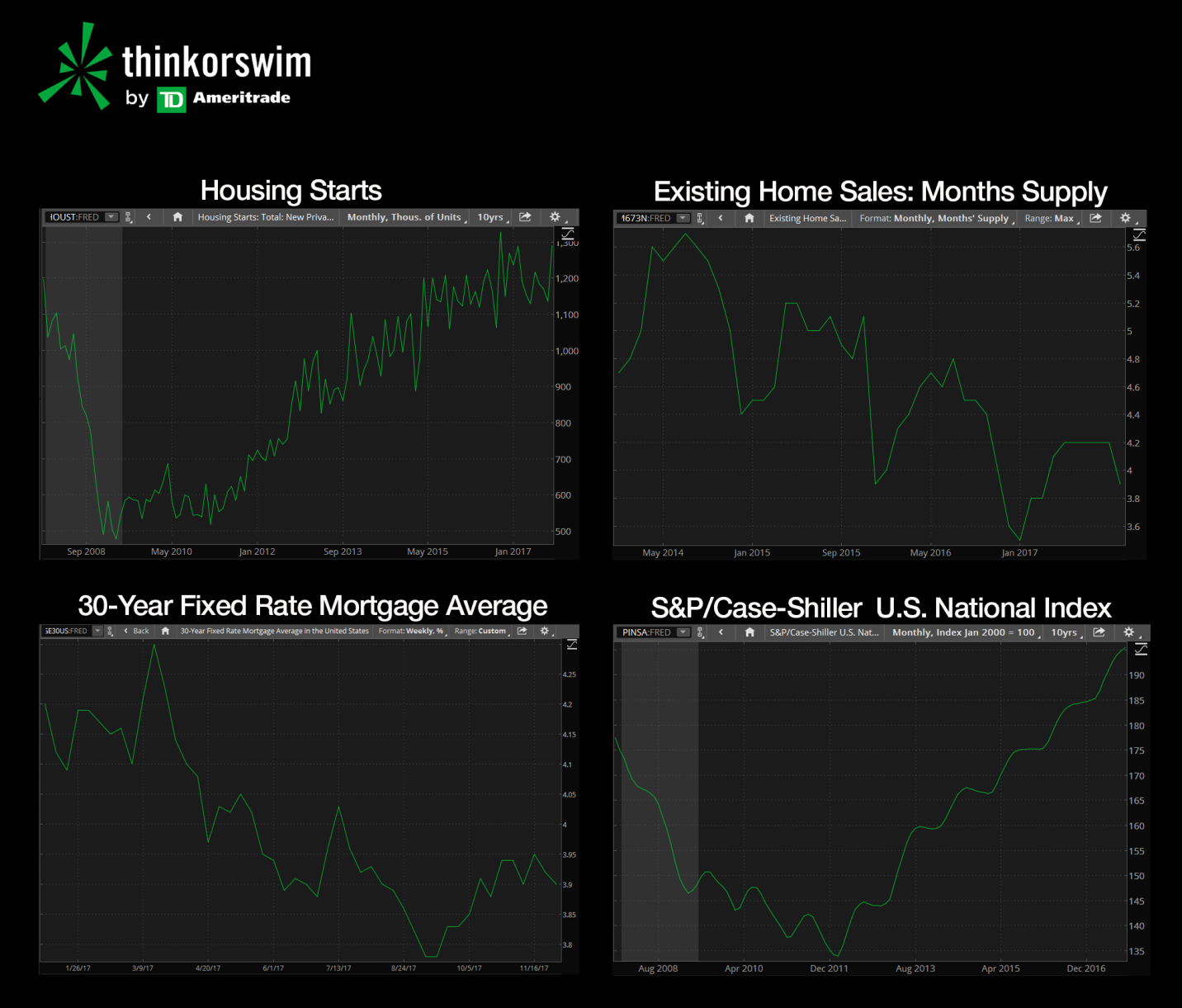 THE STATE OF HOUSING.

A potential rise in mortgage rates has been one area that analysts and economists have cautioned could negatively impact the housing industry as the Fed starts its rate hike cycle. Despite the Fed’s rate hikes accelerating in 2017, the average 30-year fixed rate mortgage rate declined, ending the year around 3.9%, about 50 to 60 basis points above the lows seen in 2012 and 2016. While analysts are still concerned that a quicker-than-expected rise in rates could dampen home purchases, rates are still close to historic lows.

Homebuilder confidence recently hit the highest it has been since 1999. December’s Housing Market Index from the National Association of Home Builders (NAHB) and Wells Fargo saw builder confidence in the market for newly-built single-family homes climbing five points to 74.

The NAHB also indicated they expect continued upward movement in the single-family construction sector in 2018 due to a combination of low unemployment rates, favorable demographics and a tight supply of existing home inventory. On the other hand, rising material and labor costs are factors the industry has said it has been concerned about, but so far homebuilders are still optimistic. 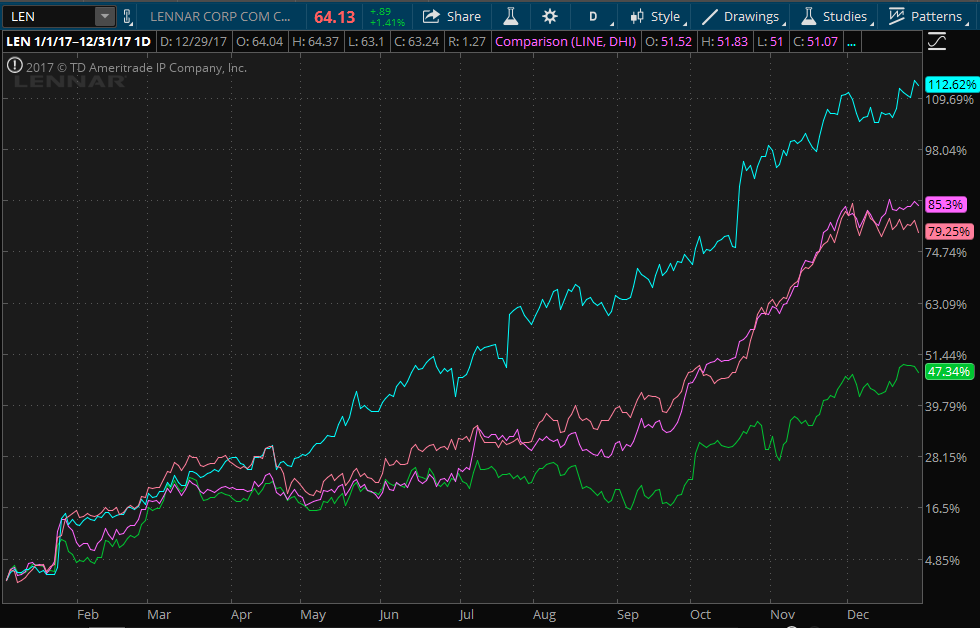 Many of the major homebuilder stocks saw rallies in 2017 and outpaced the S&P 500’s (SPX) climb to record highs. Lennar (LEN) is charted as the green line, D.R. Horton (DHI) as the pink line, NVR (NVR) as the teal line and PulteGroup (PHM) as the red line. Chart source: thinkorswim® by TD Ameritrade.  Not a recommendation. For illustrative purposes only. Past performance does not guarantee future results.

More Than Just Homes: Home Improvement Retailers and Beyond

If you’re bullish on the state of the housing industry, there are other names in the space that might be worth researching to see if they fit with your risk tolerance and the rest of your portfolio.

Both Lowe’s (LOW) and Home Depot (HD) outpaced the SPX in 2017, although not to the same extent as the homebuilders, climbing 41.11% and 30.99%, respectively. One tailwind that both companies have acknowledged in recent quarters is aging housing stocks in the United States. According to the Census Bureau’s 2015 American Community Survey, more than half of owner-occupied housing was built before 1980. Naturally, as houses age, they require more repairs and upkeep.

In mid-2017, HD management said they thought that we were in about the sixth inning of the overall housing recovery based on their own assessment of the NAHB’s housing affordability index, private residential fixed investment and other factors.

Beyond the home improvement retailers, there are many different companies that provide materials used in home construction and remodeling. Some examples include paint and coating companies Sherwin-Williams (SHW) and PPG Industries (PPG), construction material manufacturer USG Corporation (USG) and appliance manufacturer Whirlpool (WHR).

Looking for tools and resources to help research sectors and industries? Check out what TD Ameritrade offers.

Beyond Vaccines and Reopening: Are the Travel Demand Floodgates About to Open? 5 min read Thinking Big? You Might Look Small. How to Balance a Portfolio with Small-Cap Stocks 5 min read Who Snagged the (Micro) Chip Bowl: Is It Time to Worry About a Semiconductor Shortage? 5 min read