The early tone is positive today as investors look over a positive durable goods report and show growing hopes for progress on trade with new talks scheduled for next month. 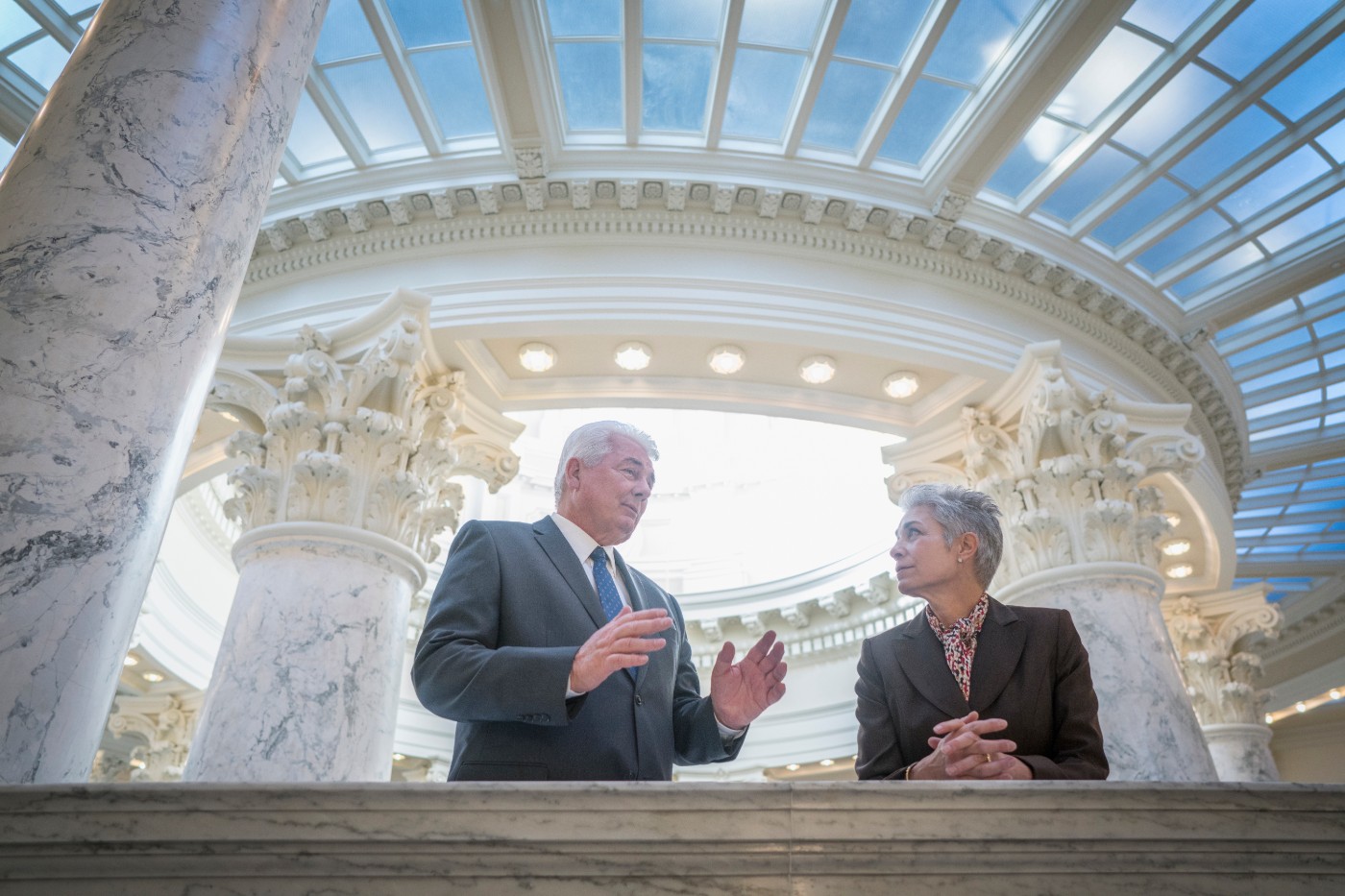 (Friday Market Open) Friday dawns after a week that didn’t provide much direction for investors. Stocks have generally chopped around in reaction to the latest geopolitical or domestic political news and stayed in a tight range. Futures rose early thanks to positive trade vibes and solid durable goods data.

The question Friday might be whether the major indices can propel themselves to a victory for the week, because they’re slightly down to date. Durable goods data could help, because it looked really nice, up from the previous month and rising for the third month in a row. We’ll have to see if that’s sustainable because a lot of it was from the defense sector in the form of planes and parts. Either way, the trend can sometimes be your friend, as the old market saying goes.

Also, the Personal Consumption Index (PCE)—the Fed’s preferred inflation metric—rose 0.1%, roughly in line with expectations. The core index, which strips out the often-volatile food and energy prices, also rose 0.1% to an annualized rate of 1.8%. It’s an uptick for sure, but still below the Fed’s stated target of 2% inflation. Might this be enough to shift the Fed’s thinking from dovish to neutral?

Whether or not stocks make a last-minute run here, it’s been hard to find much of a theme in the last few days. Hopes for progress in trade negotiations got reinforcement yesterday with an Oct. 10 date set for new talks, but the noise out of China since then has mostly been about how willing they are to buy more U.S. products.

That’s all good, but it doesn’t get at the intellectual property and other issues that U.S. negotiators say are at the heart of the matter and apparently were a sticking point when the last round of talks broke down. It’s hard to see these talks getting much further without movement on these issues.

Another focus is the impeachment drama in Washington. Two big bombshells came out this week, but stocks didn’t show much reaction. As we’ve said, it’s important to keep your emotions out of trading, and impeachment is an emotional issue. It’s likely to be a long process and a constant background noise over the next weeks and months, but investors might serve themselves better by watching earnings and data.

It’s interesting to hear some analysts saying that the impeachment situation might actually be bullish because it could put pressure on the administration to get a trade deal done on the sooner side. This school of thought suggests President Trump might be keen to get some positive headlines to counter the negative ones. That remains to be seen, and is just speculation for now.

On the earnings front, bad news came at the end of the week from Micron (MU), as the semiconductor firm issued guidance that Wall Street didn’t seem to like too much. Shares were down 5% in pre-market trading. Revenue and earnings beat third-party consensus views, but were way down from a year ago as the company continues to struggle with demand for its memory products. It wouldn’t be too surprising to see the weakness in MU shares work their way into the entire chip sector, maybe putting pressure on Technology stocks today.

And Wells Fargo (WFC) is back in the news today after the Financial company hired a new CEO. This ended a six-month search, and means investors won’t have to approach WFC’s earnings call next month with more questions about who would head the company. Shares rose in pre-market trading.

Quarterly Market Gains Not Much To See

The old quarter is just about over, and it’s been a wild one that basically didn’t go much of anywhere if you look at the major indices. Sure, they surged to new peaks at times, but also retreated. It ended up being almost a wash, with the benchmark S&P 500 (SPX) closing Thursday up just 1% from where it finished at the end of June.

The choppy trade that marked most of the quarter continued on Thursday, with the market giving up early gains, clawing back to flat, and then losing more ground by the closing bell. Some of the “risk-on” trading we saw on Wednesday didn’t really carry into Thursday, with small-caps in the Russell 2000 (RUT) drifting lower and Financials having a rough day.

Instead, some caution appears to be coming back into play late this week, with Utilities and Real Estate near the top of the leaderboard Thursday. Those aren’t places people tend to go when they’re feeling gung-ho about the economy. Bonds—another defensive area—also rallied, but gold didn’t share in the fun.

Though every day seems to have a different theme, there’s a lot of concern out there about the fundamental picture. It’s good to hear that new trade talks begin Oct. 10, as we found out Thursday, but a resolution doesn’t seem all that close.

One concern is that new tariffs announced last month on Chinese goods could start having an impact on consumer spending, which would possibly cause companies to get even more cautious. If companies stay in a holding pattern, it’s hard to see any significant rally on the horizon. Earnings growth is already expected to fall year-over-year in Q3 after sinking in Q1 and Q2.

When you get right down to it, earnings drive the market. If investors continue to see earnings grow at slower rates, at some point the market could start to reflect that. FactSet, a research firm, predicts a nearly 4% earnings loss for S&P 500 companies in Q3. Earnings fell 0.4% in Q2 and also fell in Q1, making this potentially the first three-quarter stretch of falling year-over-year earnings since late 2015/early 2016.

No Fun for FAANGS

Next week will be October, after Monday at least, so let’s look at what the market’s going to be grappling with beyond the China trade and impeachment stories. We’re still a few weeks out from earnings, meaning volatility could be a factor and the market could move up or down quickly based on the latest headlines or tweets. It could still do that after earnings start in mid-October, too, but earnings give people something solid to point at in times of turmoil.

One thing we’ll be pointing to next week is a monthly payrolls report for September. A lot of eyes are likely to be on the numbers a week from today, wondering if those relatively modest job gains back in August were a one-time deal or maybe a sign of something more serious. Even before August, job growth had been slowing this year, but it’s still above the level economists think we need to keep unemployment low.

Other data aren’t so exciting next week, but Chicago PMI on Monday might be interesting when you consider recent data where manufacturing activity appears to be slowing down. Chicago PMI surprised to the upside last time, and came in above 50. Anything below that would indicate economic contraction, according to how the report is structured. It was 50.4 in August.

Volatility can sometimes tick up the last days of the quarter, but the Cboe Volatility Index (VIX) has dropped below 16 this morning after topping 17 earlier this week.

FIGURE 1:  SHY INDEX? The S&P 500 (SPX-candlestick) has been flirting with 3000 and even going over it now and then, but keeps backing off whenever news turns bearish. This five-year chart shows there’s nothing unusual about this. As you can see, the SPX first rose above 2000 in August 2014, but didn’t get above that level for the long haul until June 2016. Without a China deal, it might be difficult to see much of a rally above 3000 anytime soon. This appears to be a psychological level that’s like a line in the sand for some market participants. Data Source: S&P Dow Jones Indices. Chart source: The thinkorswim® platform from TD Ameritrade. For illustrative purposes only. Past performance does not guarantee future results.

Company Caution Crimps Quarter: Normally, the government’s report on gross domestic product (GDP) gets lots of attention. That wasn’t the case yesterday because a few other things were going on (there’ve been some political headlines, if you haven’t noticed). A check of the data showed 2% growth in Q2, which means the slowdown that began early this year continued. As a reminder, gross domestic product was nearly 3% in 2018. To some extent, this downturn probably reflects the trade war with China. Many companies appear to be in a holding state because they’re putting off decisions on business plans. You can’t continue to have companies putting decisions off, because it could start affecting the longer curve of growth. It may already be doing that.

Crude Concerns: The fundamental concerns mentioned above aren’t any easier to dismiss when you consider how crude’s behaved recently. Remember when U.S. crude rose above $60 less than two weeks ago in a 15% one-day rally? Seems like a long time ago, with crude back down in the mid-$50’s by Thursday. Rising U.S. inventories apparently caught some market participants by surprise and raised questions about demand. It’s just a week or two of data, so you don’t want to make any broad conclusions, but falling crude demand would possibly be a sign of a slowing economy if it continues. That remains to be seen, but for the moment it’s hurting the Energy sector, which suffered more than a 1% loss yesterday.

Batting 3000: The first time the S&P 500 (SPX) crossed the 2000 level was on Aug. 26, 2014. But it traded below 2000 on an intraday basis 22 months later, on June 27, 2016. The lesson here? Just because an index crosses a big round-number benchmark doesn’t mean you can put that magic number in the rear-view mirror and forget about it. We’re getting a reminder of that now, with the SPX struggling to get its head above 3000 after first hitting that mark back in July. At this point, the late July intraday high of 3027 remains the peak, and the SPX has fluttered back and forth above and below 3000 ever since.

This doesn’t necessarily mean we’ll still be wrestling with 3000 in mid-2021, though that can’t be ruled out. And while we’re talking scenarios, one can’t rule out a major test to the downside either. In the near-term, it’s very hard to see any move above 3000 lasting long without a China deal. Anticipated weak earnings are another major barrier, because without earnings growth, it gets harder and harder to justify rallies.