After Walmart’s Cheery Pre-Holiday Results, Target slides on an earnings miss and guidance that its shoppers may be waiting for big markdowns to open their wallets. 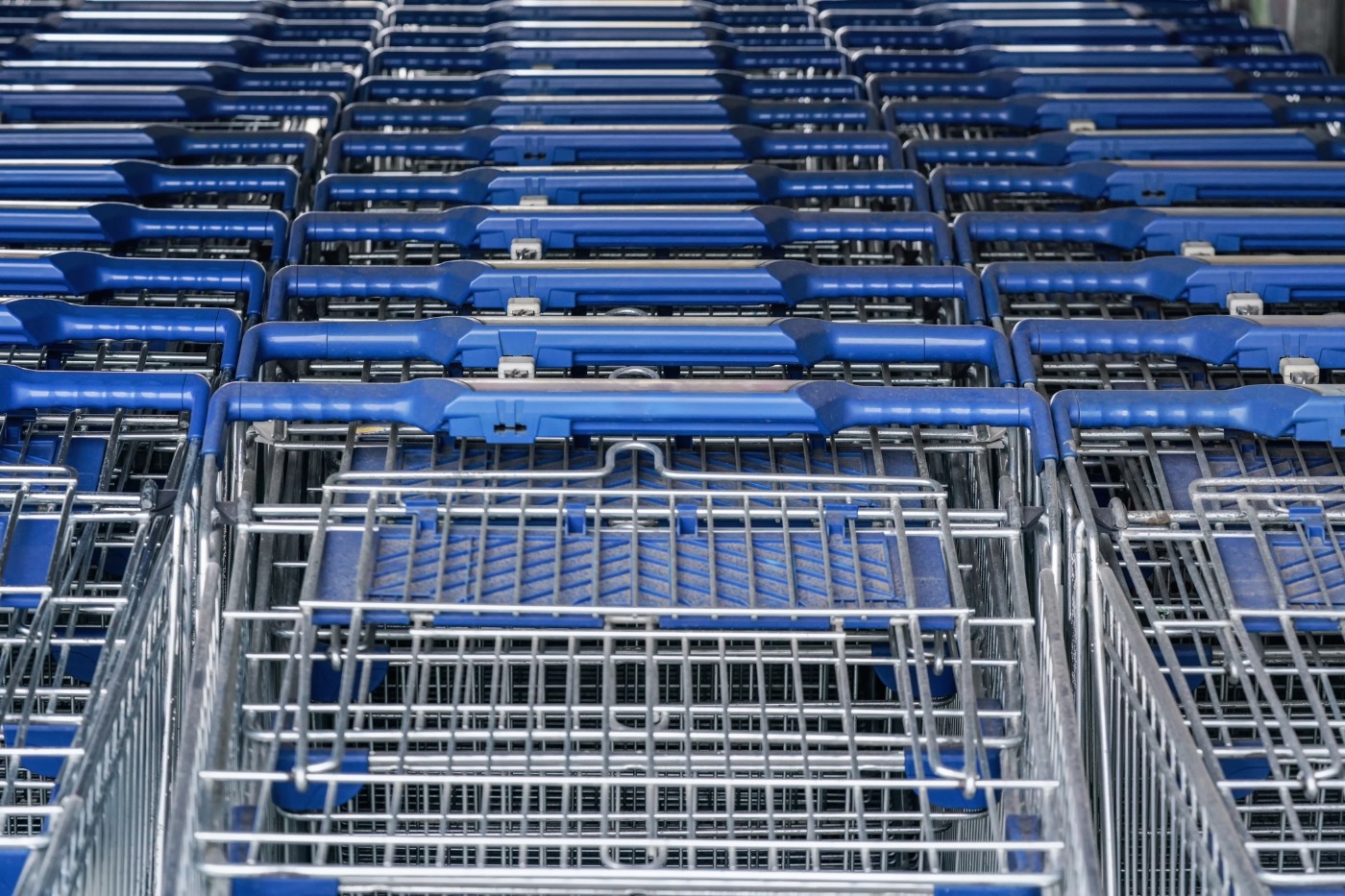 (Wednesday Market Open) A rocket designed to carry people back to the moon for the first time in 50 years is on its way this morning, but stocks are stuck at the launch pad.

As Artemis 1 speeds off, investors back on Earth mull retail sales and a couple fresh big-box earnings from Target (TGT) and Lowe’s (LOW). After WMT’s solid results yesterday, TGT serves as a reminder that every retailer deals with different circumstances, making it a tough industry to put a box around, so to speak.

Before checking TGT and retail sales, it’s worth noting that the benchmark 10-year Treasury yield (TNX) continues to decline. It’s now down at 3.73%, its lowest level since early October. Yields have been falling for a while, but yesterday’s Producer Price Index (PPI) data and more data weakness out of China added fuel to the fixed income rally yesterday. The drop in yields reverses one obstacle that put a hold on recent rallies.

Another rally-breaker, the U.S. Dollar Index ($DXY), also remains under pressure this morning, falling below 106. If stocks can’t arrest their early slide, they won’t be able to blame yields or the dollar.

Keeping the dollar in mind, it’s interesting to see U.S. import prices fell 0.2% in October, according to data this morning. Lower import prices are a good sign for the economy, but remember that they’re one benefit of the strong dollar, which is hard on the rest of the global business world.

This comes after the major retailer saw sales and profit trends “soften meaningfully” in the latter weeks of Q3, resulting in Q3 profit well below its expectations. TGT said it observed shopping behavior “increasingly impacted by inflation, rising interest rates and economic uncertainty.”

Walmart managed to avoid Target’s scenario when announcing its numbers Tuesday, but TGT’s outlook still raises questions about consumer health heading into the peak shopping season of the year.

According to TGT, consumers are spending more on essentials like groceries, but waiting for markdowns before buying stuff they don’t need right away. This trend hurts TGT more than WMT, because TGT’s business is weighted more heavily toward discretionary items.

Retail Sales Roar: Though TGT appeared to miss the party, U.S. October retail sales climbed a much higher than expected 1.3% as consumer spending looked pretty nice. Wall Street had expected 0.9% growth. This goes against the “economy is slowing” thesis, especially because with inflation easing a bit in October, the rise in sales can’t be simply attributed to rising prices. Consumers raised their spending on gasoline, food, and cars, among other things.

Amid all this morning’s churn, the Cboe Volatility Index® (VIX) remains below 25, but keep an eye on it for possible moves toward 25 that might suggest more pressure on stocks.

Peeking at PPI: Yesterday’s milder-than-expected PPI report offered a bit more clarity on what’s going up and what’s not in the wholesale world.

Digging a bit deeper, the report might have been even more bullish than its 0.2% headline and 0.0% core PPI growth at first glance. One item that grabbed attention was another drop in food and feed costs, which have fallen more steeply each of the last three months.

There was also a sharp decline of 0.8% in the index for processed materials aside from food and energy. And final demand services fell 0.1%; the first drop in almost two years.

December Rate Odds: The PPI and last week’s softer Consumer Price Index (CPI) raised optimism ahead of the December 13-14 Federal Open Market Committee (FOMC) meeting. As of early this morning, the CME FedWatch Tool indicated chances fora 50-basis-point rate hike now stand at 80.6% according with chances of a 75-basis-point hike down to 19.4%. The Fed has hiked rates 75 basis points at its last four meetings, an unprecedented occurrence.

Taking 5: Looking further out, the market now projects a less than 50% chance of the Fed’s benchmark rate moving to 5% or above next year. The FedWatch tool shows that rates will top between 4.75% and 5% by the middle of 2023, with around a nearly 90% chance that they’ll fall from there into the end of the year.

Granted, it’s way too early to have any solidity around such expectations with so much uncertainty about the economy and geopolitics. Still, it looks like the market is starting to get back to pricing in a terminal, or peak, rate closer to the 4.6% shown in the Fed’s September “dot-plot.” Just a few weeks ago, the market appeared to have rates of 5% or higher pretty much baked in.

Retail stores dominated earnings news earlier this week, but Nvidia (NVDA) will provide an update on the choppy semiconductor market with its results later this afternoon. According to Barron’s, the company’s data center business remains in focus, and analysts are hoping for more visibility on how recently enacted U.S. restrictions on shipments of artificial intelligence (AI) chips to China might affect demand. Like other companies in its industry, NVDA has warned that the new restrictions could hurt its business—in its case, to the tune of $400 million. The company’s report could offer more insight into the real-world impact of these new rules.

Despite this uncertainty, the chip sector has regained some of its previous demand from investors, according to recent data. The October TD Ameritrade Investor Movement Index® (IMXSM) showed investors were using lower prices as an opportunity to increase exposure to semiconductor companies like Intel (INTC) and Advanced Micro Devices (AMD). The PHLX Semiconductor Index (SOX) is up an astonishing 36% from its October 13 low (see chart below). By comparison, the S&P 500® index (SPX) is up less than 9% since then.

The chip subsector remains down about 30% year to date, far worse than the SPX. NVDA shares have performed even worse than many of its peers in 2022.

After a midday geopolitical scare of missiles hitting Poland sent stocks lower and Treasury yields higher Tuesday, Wall Street made back some of its gains while major indexes finished below their intraday highs. The tech-heavy Nasdaq Composite® ($COMP) topped the leaderboard once again, continuing to flex its muscle in a more “risk-on” type of trading. Communication services, consumer discretionary, and information technology, all of which include stocks traditionally thought of as belonging to “tech,” finished 1, 2, and 3 among S&P 500 sectors, and “mega-caps” generally had solid days.

Technicals Corner: Investors tend to get excited by big round numbers, and 4,000 for the SPX is definitely one of them. It’s a level the SPX hasn’t closed above since September 12, and three attempts failed in the last four days, including Tuesday. Aside from being a round number, however, there’s not much magic for 4,000 beyond the psychological impact, according to some chart watchers. The more intriguing numbers for the SPX are 4,100 on the higher end and 3,900 on the lower end (which happens to be right near the 100-day moving average).

CHART OF THE DAY: OUT-SOXED. Since both hit their recent lows in mid-October, the PHLX Semiconductor Index (SOX—candlesticks) is outperforming the SPX (purple line). Investors have been gravitating toward beaten-down shares of some of the semiconductors, according to TD Ameritrade research. Nvidia (NVDA) reports today after the close. Data Sources: Nasdaq, Philadelphia Stock Exchange, S&P Dow Jones Indices. Chart source: The thinkorswim® platform. For illustrative purposes only. Past performance does not guarantee future results.

“Bad News Is Good News,” Redux? The November Nonfarm Payrolls report is still weeks away (December 2), but tomorrow’s Initial Jobless Claims data due before the open could offer clues after two big job cut announcements. Last week, Walt Disney (DIS) said it was contemplating “staff reductions,” and Meta (META) committed to cutting 11,000. On Monday, Amazon (AMZN) announced it would lay off 10,000. It’s disheartening for anyone to be laid off, especially ahead of the holidays, but the market might do that cringeworthy thing again—applauding cuts as a signal the Federal Reserve’s inflation fight could be winning. Initial claims climbed by 7,000 to 225,000 in last week’s report, but the four-week average actually declined 250 to 218,750. This week, Wall Street expects a headline number of 230,000, which would be the highest weekly total in more than a month. If it hits that level or higher, it could suggest these recent corporate layoffs are having an impact. But no single week is a trend. Unemployment of 3.7% remains near the lowest levels in 50 years, although the Fed expects it to rise well above 4% at some point as rates keep squeezing the economy. Watch that four-week MA over time for any signs of change.

Home Brew: The rest of the week brings investors crucial housing data, starting with Thursday’s premarket October Housing Starts and Building Permits reports and Friday’s October Existing Home Sales data shortly after the open. Back in September, Housing Starts lost a sharp 8.15% month over month, but Building Permits—often seen as a barometer of future housing demand—actually rose more than 1%. However, permits were weighted toward multi-unit developments, with demand for single-family homes declining among both permits and starts in September.

Analysts expect that tomorrow’s data will show October declines in both starts and permits. According to Briefing.com, the consensus is:

Eye on Builders Ahead of Data: Tomorrow’s projected starts figure would be close to two-year lows. The permits number would also be lower than it was earlier this year, and the three-month average for both is sinking as the industry gets slammed by higher mortgage rates. Home-building stocks like Lennar (LEN), D.R. Horton (DHI), and KB Home (KBH) have had good Novembers, rebounding from their fall lows. Last week, DHI, in its earnings release, noted that after a strong start to 2022, it’s seen a “moderation” in home demand due to mortgage rates and economic uncertainty, but it remains optimistic due to the tight housing supply and demographics that have led to higher housing demand.