Spotify’s investor presentation touched on things the younger generation is tuned into with its emphasis on fairness, transparency, and uninterrupted access. What can investors learn from this? 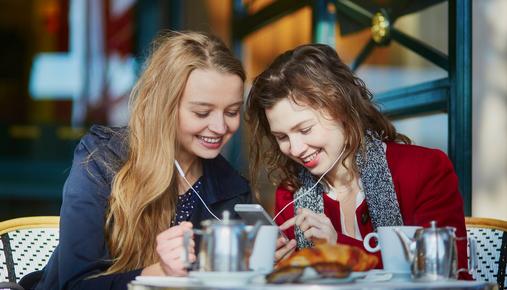 The largest percentage of the U.S. population isn’t Baby Boomers or Millennials. Members of “Generation Z,” born in 1995 or later, now make up more than 25% of all Americans. This generation is already dipping its toes into the turbulent waters of the stock market, and investors might benefit from learning which stocks the new arrivals start diving into.

If you can figure out what interests, values, and aspirations the newest generation shares, you can potentially invest in areas that may grow once these youngsters start building their retirement and investment portfolios.

“Every generation brings different beliefs and values to investing,” said Joel Miller, Director, Retail Strategy & Operations: Learning and Development at TD Ameritrade. “Younger investors today have different emotional needs that drive investing behavior. Fairness, free stuff, and transparency get your foot in the door.  This is critical in understanding this consumer’s behavior.”

Though it might seem unfair to use just a few words to describe an entire generation, it’s arguable that these terms mean a lot to those college aged and younger. Here’s a generation that grew up with the Internet. They’re used to getting their music, news, and even sometimes their homework assignments for free online. From early on, they used Alphabet (GOOG), a company that emphasized fairness with its “Don’t be evil” motto. They’re sometimes described as a group that’s used to “participation trophies” and games where “everyone wins.”

Generalizations? Certainly. But companies appear to be buying in, judging from how they cater to kids by emphasizing these terms. The latest was music-streaming service Spotify, which gave an investor presentation last week ahead of its planned introduction of publicly-traded stock. Spotify’s presentation included those very elements — fairness, free stuff, and transparency.

“The traditional IPO model isn’t a good fit for us,” co-founder and CEO Daniel Ek said, describing why the company is taking the unusual step of listing its stock as a direct offering. “Going public isn’t about pomp and circumstance. We don’t think a lock-up is the right thing to do. We want to treat our people fairly and value them. Our most important day isn’t our listing day, but the day after and the day after that, allowing one million artists to live off their art.”

Later, Ek recalled how he was inspired to start the company when he heard a musician friend complain that he had to work a day job. How sad, Ek said, that issues like piracy were robbing artists of their ability to make a living.  “We could compete against piracy and make sure musicians were paid for their work,” Ek said.

Why did Spotify take off, Ek asked? “It worked because we recognized consumer behavior,” said Ek. “Fans wanted all music for free immediately.”

In fact, later in the presentation, Spotify executives emphasized the company’s “freemium” business, which offers Spotify’s basic services for free with the ability to pay for upgrades. At the end of 2017, Spotify had 159 million active users, but only 71 million paid subscribers, the company says.

“To reach the most users you have to be most competitive and lower the price to zero,” said Gustav Söderström, chief R&D officer at Spotify.

Generation Z and their Millennial counterparts seem comfortable putting their personal information on social media sites, and some companies are getting more open, too. Spotify made its presentation on the Internet rather than behind closed doors.

“We’re live-streaming today’s event to any one who wants to watch,” Ek said at the outset. “We want to be as transparent as possible and give everyone equal access.”

The Art of Self-Driving

Those aren’t the only Generation Z trends Spotify emphasized. One part of its presentation, “Self-Driving Music,” appears to play into the comfort younger people have with automated systems for driving and investing, where “robo” tools have grown popular. “People are handing the wheel to us” to make music choices, Söderström said.

“Spotify appears to understand how important connecting its product vision to its target market really is,” said Miller, of TD Ameritrade. “The future of music is here now and the subscriber groups that will carry long-term product growth are not baby boomers or Generation Xers. Young investors today have significantly different triggering points than older generations. Inspiration and buying triggers come from experience versus financial statements or earnings releases.”

However, young peoples’ investing patterns don’t seem too different from broader trends. For instance, in February both Millennials and the general population of TD Ameritrade clients tracked by TD Ameritrade’s Investor Movement Index® (IMXsm) made Amazon (AMZN) and Apple (AAPL) their two most popular buys among TD Ameritrade clients, and the top-10 didn’t vary much. Older investors did seem more focused on dividend-paying stocks.

According to Investor’s Business Daily, seven of the top-10 stocks held by Millennials as of early this year were tech names. One was Snap (SNAP). “In the case of SNAP, I think the Millennials are interested in it because they use it and it is part of their everyday life,” said Lindsey Bell, investment strategist at CFRA. “The same I would say goes for Spotify, but the transparency/free stuff sweeteners certainly help, I’m sure.” Shares of SNAP  — which went public just over a year ago — haven’t gained much traction, falling 20% over the last year. Others on the list included chipmaker Advanced Micro Devices (AMD), Apple (AAPL), and Facebook (FB). Both AAPL and FB posted big gains in 2017, though FB got hurt recently by data breach concerns. AMD shares climbed sharply in 2016 but have treaded water since, and are actually down a little over the last year.

As Generation Z invests money into the market over the next decade, consider monitoring shares of the companies like those mentioned above. SNAP went public last year and floundered. AMD shares have also struggled. If shares of these companies start reviving, and Spotify gains ground once it goes public, it could be a sign that younger investors are buying into the corporate story behind the firms, not just the products. Also check out the monthly IMX, which can help you monitor general investment trends.

All investments involve risk, including loss of principal.