September Outlook: This Month Has a Bad Reputation, and Powell’s Comments Could Cause History to Repeat Itself

September has historically been a tough time for stocks, but Fed Chairman Jerome Powell’s tough talk on inflation just added to this month’s list of concerns. 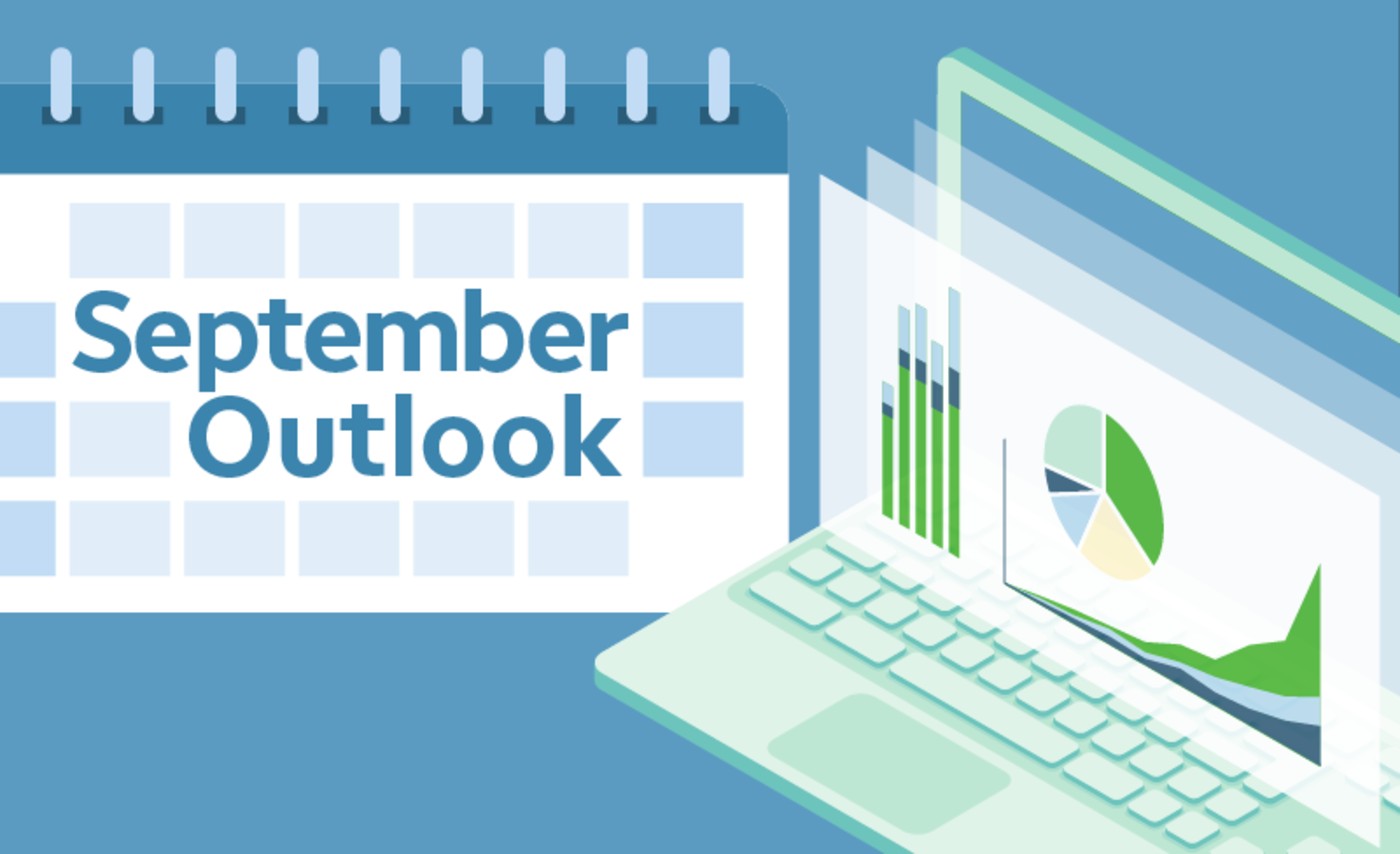 September tends to be the worst month for stocks—October just has the worst reputation.

Once money managers return from summer vacations, many try to adjust their portfolios to make a year-end run in hopes of beating their respective benchmarks. According to Dow Jones® market data stretching back to 1928, the S&P 500® index (SPX) and the Dow Jones Industrial Average®($DJI) have both averaged a 1% loss in September—making it, on average, the worst month of the year for each index.

Of course, these are just averages, and there are certainly plenty of positive Septembers to point to. Unfortunately, investors have plenty reasons to be concerned about this particular September.

It’s nearly two months until Halloween, but let’s start with the shiver Federal Reserve Chairman Jerome Powell put down the market’s spine late last month. On August 26, he opened the Fed’s Jackson Hole Economic Symposium with a very precise speech that reiterated the Fed’s commitment to attacking inflation, even if it triggers a slowing economy and rising unemployment. Without strong action, Powell stressed that inflation could become entrenched in consumers’ minds.

It’s a far cry from the aftermath of the Fed’s July rate hike when the tool was forecasting 50 in September and 25 in November.

In fact, the European Central Bank policymakers released a similar message the day after Powell’s that signals a 50-basis-point rate hike for September 8. For evidence, look no further than Germany’s announcement that its inflation rate had nearly reached a 50-year high.

The Cboe Market Volatility Index (VIX) reflected this tension when it moved from 22 before Powell’s comments to above 26 on August 29. At this level, market volatility has historically seen daily moves as high as 2%. If the VIX remains elevated, investors should consider viewing market rallies in the coming days with caution.

With nearly a month to go until the next Fed rate decision, August’s final data offered further evidence of the complex territory the central bank is moving through.

On the Friday Powell spoke in Jackson Hole, the government released the PCE price index, the Fed’s favored inflation report. It showed that July’s core inflation numbers were good—coming in lower than expected at 0.1% month over month instead of the projected 0.3%. Year-over-year (YOY) core inflation was 4.6%, which was better than the expected 4.7%. Additionally, the Michigan Consumer Sentiment report revealed that falling gas prices throughout July helped boost consumers’ outlook on inflation, echoed by a better-than-expected Conference Board late-August consumer confidence reading that showed an increase for the first time in four months.

July’s Consumer Price Index (CPI) data was also softer than expected. Analysts estimated it would grow 0.2% in July, but the print was 0.0% because falling fuel prices offset gains in food and shelter prices. The CPI grew at 8.5% YOY, which is below the estimated 8.7%. The August CPI report is scheduled for September 13.

Yet on August 30, the Conference Board’s portrait of a rebounding consumer and the U.S. Labor Department’s JOLTS report revealing there were nearly 1 million more job openings than forecasted for July showed that a slowing inflation picture is far from settled. Also, the S&P CoreLogic Case-Shiller index indicated home price increases in major urban areas were lower in June but still higher than a year ago.

Seeing May Be Believing

One reason Powell may have felt the need to reiterate the Fed’s commitment to bringing down inflation is because investors didn’t seem to believe the Fed. In investors’ defense, the chairman did sound pretty dovish after the July rate hike, which may have not been his intention. In fact, Fed members seemed to go out of their way in August to adopt a more hawkish tone. Among their recent comments:

While the stock market appears to be taking the Fed more seriously with its sell-off after August 26 and the bond market has increased expectations for rate hikes in September and November, the futures market is still expecting the fed funds rate to top out between 3.75% and 4% by year-end. The futures market also expects those rates to stay right there until an anticipated rate cut in 2023.

A projected rate cut next summer suggests that’s when futures traders expect the United States to fall into a recession. And fed funds futures aren’t the only indicator projecting a recession. The yield curve as measured by the 2s10s ratio has been inverted since the end of June. While the yield curve doesn’t help project exact timing for a recession, it has been a reliable harbinger of recessions.

With Powell saying that the Fed is willing to bring on a recession and higher unemployment to rein in inflation, economic data related to GDP and employment will be important to watch in September.

Second-quarter gross domestic product (GDP) was revised to -0.06% in August, which is better than the forecasted -0.08%. The adjustment appeared to be driven by an increase in consumer spending. The third update to Q2 GDP is scheduled for September 29.

Third-quarter GDP is likely to be better than Q2. The Federal Reserve Bank of Atlanta’s GDPNow tool was updated August 26 with a forecast of Q3 GDP growth at 1.6%. While GDPNow’s estimates had been running high all year and missed the negative numbers of the first two quarters of 2022, the July trade balance report showed improvement in the ratio between U.S. exports and imports. This should help GDP get back to the positive side.

But, with so many government officials and economists discounting the old measure of recession as “two consecutive quarters of negative GDP,” this puts more emphasis on the strength of the labor market.

The August Employment Situation report is scheduled for this Friday, September 2. It’s likely to be a big report because the job market has been so strong despite slowing economic growth. If the job market numbers stay high, the Fed will likely feel more confident with an aggressive approach to raising rates.

FIGURE 1: BROAD STROKES. Drawing trendlines can be frustrating because there are short-, intermediate-, long-, and even secular-term trends. The thinkorswim® channel tool can help you increase your confidence when drawing your trendlines by lining up parallel support and resistance lines. You can also add a 50% line to mark the halfway point between a channel. The middle line helps you collect more data points for your channel. Technically, a trendline only needs two data points, but the more data points you have along your channel lines, the more confidence you’ll have in your trendline. It also helps you view the various trend lengths in the price action. This channel drawn on the S&P 500 (SPX—candlesticks) connects downtrending resistance points with support points. The 50% line appears to line up with early 2022 lows too. The channel frames the short-term trend rally from June to August. Data Source: S&P Dow Jones Indices. Chart source: thinkorswim® platform. For illustrative purposes only. Past performance does not guarantee future results.

Judging by the major indexes, the Q2 earnings season was a good one. The S&P 500 (SPX) rose nearly 8% from July 1 to August 23. Although, it was above 14% by mid-August, looking back, it may have been more of a relief rally than an exoneration of earnings.

While there are a few stragglers left, as of August 26, 486 of the S&P 500 companies had reported. The index is on course for a blended growth rate of 8.5%. However, when excluding the energy sector, the YOY estimates is -2.2%. Energy had the highest earnings growth rate than any sector with 296.7%. Communication services had the lowest at -20.3%.

So far, 78% of the S&P 500 companies have reported positive earnings surprises. This is above the long-term average of 66.1% but below the prior four-quarter average of 80.6%.

FactSet’s data is projecting an earnings growth rate for the S&P 500 for the remainder of 2022 at 8.9%. However, when you remove the energy sector, the number falls to 2.4%.

Two officials from the National Association of Home Builders, Chief Economist Robert Dietz and assistant vice president Danushka Nanayakkara-Skillington, have been outspoken about the U.S. housing market being in a recession. Unfortunately, the evidence just kept building in August.

Realtor.com reported that housing inventories grew 30.7% in July, the fastest pace on record and the third month in a row of inventory gains. New listings were down 2.8% in July YOY as prospective sellers appeared hesitant to put their homes on the market.

Unfortunately, housing problems may not just be in homes. The rental market could also be softening. RealPage says foot traffic for apartments is falling. Normally, rental foot traffic tops out in mid-summer, but the real estate analytics company said that it topped out back in March and has been pretty much falling ever since.

There once was talk that the Fed was hoping for a “soft landing” as it tried to tame skyrocketing inflation. Mr. Powell’s words now seem to suggest that Fed members are more worried about inflation than they are about sticking a soft landing. What the economy needs right now is for inflation to start falling, and falling quickly, if we hope to avoid a recession next year.