October Outlook: Will a Scary September Make for a Hair-Raising Halloween in the Markets?

October has a nasty reputation, but September is historically the worst month of the year. As October begins, all eyes are on spiking yields and the rising dollar. Unless those start to moderate, October could also be rough. 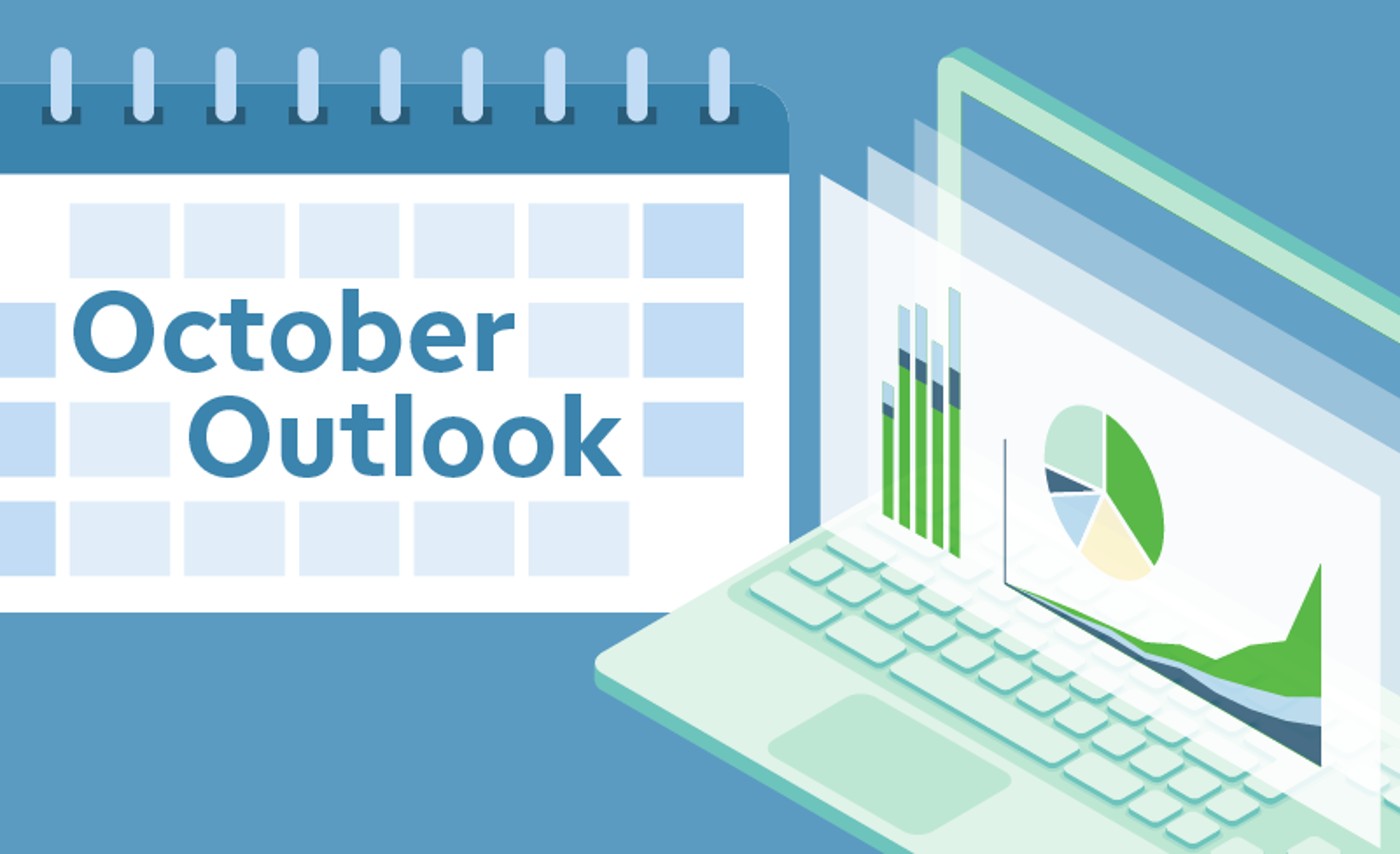 October is known for Halloween, but it’s hard to imagine a month much scarier for investors than September.

In the final days of September, investors around the world began coming to grips with the Fed and other central banks getting very aggressive in tightening rates. It appears the Fed is willing to sacrifice economic growth to get inflation under control, and the market’s reaction was to price in a global recession.

The days of “buying dips” and hoping for the Fed to support equities are clearly behind us, especially with the 2-year Treasury yield above 4% and the 10-year Treasury yield at a 50-point premium. An inverted yield curve like this is often seen as a major recession alarm bell.

And rising yields tend to be kryptonite for stock prices.

The Fed has now hiked the overnight rate by 300 basis points this year, and it generally takes six to 12 months for rate hikes to start doing their work on the economy. We’re close to that point, so it’s more important than ever to watch October’s economic data to see if these higher rates are having an impact.

Investors won’t have to wait too long in October for the key numbers to start showing up. The September payrolls report, due October 7, could set the tone. The Fed has said we can expect pain, and the jobs data is where we might start to feel it.

Back in August, payrolls rose a healthy 315,000, just below analysts’ consensus estimate, and unemployment ticked up to 3.7%. The Fed, in its economic projections, said it expects unemployment to top out at 4.4% next year, but many analysts think that may be too optimistic considering all the hikes the Fed has made and the ones that are likely ahead.

While September’s jobs report may be a bit early to really see the Fed’s impact, with three 75-basis-point hikes since June alone, you can’t rule out job growth being affected. Actually, a painful October jobs report might actually be somewhat supportive for stocks because we’re arguably in one of those “bad news is good news” times that might help shape a more dovish Fed policy.

However, we’d probably need to see a bunch of bad jobs reports in a row accompanied by falling inflation for the Fed to even consider slowing down.

Jobs may be October’s key data point, but housing is another to watch as it’s already seen a huge impact from rising mortgage rates. The upcoming September new home and existing home sales reports could show if there’s been more pain for homebuyers and sellers as well as homebuilding companies.

All year, investors have had a close eye on inflation, and that will be no different in October. The monthly Consumer Price Index (CPI) and Producer Price Index (PPI) for September will play big roles in the market’s direction. August CPI was a disappointment for the bulls, so we’ll see if the trend improves with September’s numbers.

In the very first week of October, we’ll also get the September ISM Manufacturing Index, which has been on a downswing for months. The ISM stood at 52.8% in August, and any reading above 50% indicates expansion. It’s been two years since ISM indicated retraction, but if it flips into the red below 50%, that might be a warning sign that the economy has slowed further.

Dialing Up the Dollar

Overseas, October could be another gripping chapter in this year’s U.S. dollar rally. The U.S. Dollar Index ($DXY) recently reached multi-year highs near 112, and the dollar at one point in September traded at a 37-year high versus the British pound. A strong dollar has been another factor, along with rates, putting pressure on stocks.

The Bank of Japan intervened in September to support the yen versus the dollar; something it hadn’t done in around 20 years. The firm dollar is making U.S. goods more expensive for buyers overseas, contributing to inflation that was already running hot thanks to supply chain issues, the Russia-Ukraine war, and COVID-19 shutdowns.

Central banks are defending their currencies, but the collateral damage may be the economy. Debt servicing could get more troubling for many companies, both in the United States and abroad, as rates go up.

At the same time, a strong dollar is likely going to be a headwind for some major U.S. companies with heavy overseas market exposure, which brings us to October’s earnings season.

Companies like Apple (AAPL), Microsoft (MSFT), major airlines, energy firms, and large U.S. health care companies are among those with heavy exposure to overseas markets and could be burdened by the greenback’s strength. The dollar’s been going up most of the year, but its full impact on these companies may hurt Q4 earnings more than Q3.

As always, the big banks will kick things off on the reporting front, and sometimes they can establish the tone for the rest of earnings season. Anything some major bank CEOs, like Jamie Dimon of JPMorgan Chase (JPM), have to say could carry a lot of weight.

Dimon arguably got things started September 22 in his testimony to Congress that lawmakers “should be prepared for the worst.”

There’s something else to factor in when banks report—the health of their loan books. Loan activity is considered a pretty good proxy for business confidence. Back in early 2020 during the first weeks of the pandemic, bank loans were in sharp focus, with many large banks setting aside funds to cover themselves in case of borrower defaults. If the economy does take another leg down, banks will likely feel the hit with declining demand for business and consumer loans, including their credit card businesses. That could be something to watch for if things get much worse.

Bank earnings typically swing a lot of weight, but so do results and earnings commentary from the nation’s biggest mega-cap firms like Tesla (TSLA), AAPL, Alphabet (GOOGL), and MSFT. Their results could be big drivers of where the market will go as October advances.

As of late September, the earnings picture looked like this, according to a September 23 report from FactSet:

Other Stuff to Watch

If earnings, interest rates, a 20-year high in the dollar, and key data aren’t enough to keep track of, here are some other things October brings.

Election Prep: The November 8 U.S. midterm election could become more of a market driver as October advances. Sometimes, the prelude to elections can cause higher-than-normal volatility.

China Watch: Throughout the year, events in China have played a big role influencing world markets. After all, China is the world’s largest manufacturing nation. If China sees any major developments in its real estate market or shuts down more cities due to COVID-19, that could have ramifications for U.S. markets.

War in Ukraine: Russia’s continued war against Ukraine has had a big impact on the global energy market, and tensions seemed to intensify as September continued. Any major events on this front could support crude prices even if the economy seems to be tipping into recession, which could be a double blow to consumers.

SEPTEMBER: A SEA OF RED. Whichever index you follow, September has been a terrible month for the market. But the worse performer (the pink line), was the small-cap Russell 2000 Index (RUT). The RUT is considered a good proxy for investor confidence in the U.S. economy, so to see it leading the losses points to negative sentiment about potential U.S. economic growth and worries about possible recession. Data Sources: S&P Dow Jones Indices, Nasdaq, FTSE Russell. Chart source: thinkorswim® platform. For illustrative purposes only. Past performance does not guarantee future results.

In the wake of the September Fed meeting, a lot of analysts’ notes hit the tape trying to translate the dot-plot into an actual story, which is hard to do.

Some of the earliest feedback showed many were wondering if the Fed will continue sounding hawkish if gross domestic product starts to go negative (in the September 22 dot-plot, it stayed positive). Analysts were also wondering if unemployment can stay as low as the Fed projects, below 5%.

These observations aren’t coming from just a handful of commentators. There are some pretty big asset managers saying these things, and if they change their investment policies as a result, it could drive more volatility. In fact, it already appeared to be the case in late September as markets around the world began scraping against their lowest levels of the year, and U.S. crude oil futures dropped below $80.

In fact, if you want proof that this latest downturn in the markets is about growth worries, let crude be your guide. It’s down sharply, and not because more supply is seen coming to market. Instead, it’s being driven down by demand fears. A recession typically means a big drop in commodity demand, especially for crude and building materials like lumber. It looks like many investors are starting to expect such a scenario.

And if the prospects of a steep recession aren’t scary enough, there’s always Halloween.