May begins with the market at all-time highs and earnings looking solid. Can May continue the string of booming economic data, or will fears of inflation and overheating start to clip the long rally? 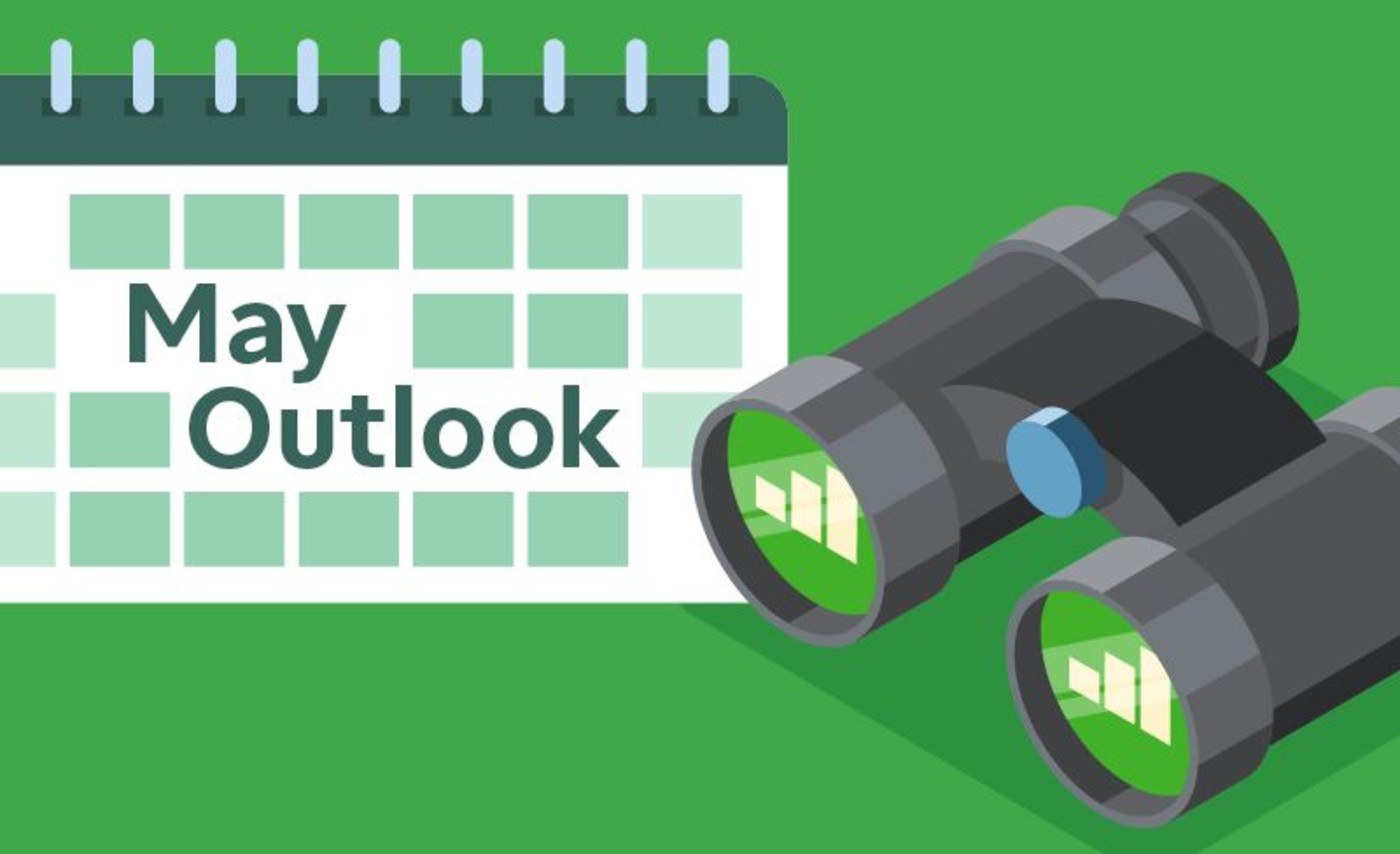 What a difference a year makes.

Unlike last May, there’s arguably lots to look forward to as vaccinations gain steam. People are back at baseball stadiums, and the Kentucky Derby and Memorial Day picnics loom. Oh yeah, we’ve also got the April jobs report straight ahead.

OK, so maybe jobs data aren’t as exciting as a famous race or a full picnic basket after a year without many fun events. Having said that, the April non-farm payrolls data scheduled for Friday, May 7, could help set the tone in a big way for stocks and bonds this coming month, which makes it more than just another hum-drum economic report.

Payrolls, along with the aftermath of April’s Federal Open Market Committee (FOMC) meeting, could affect trading in the days and weeks ahead, giving a sense of whether jobs strength continued from March and if it’s strong enough to get investors worrying more about potential economic overheating.

There’s a lot to May beyond the jobs report and anything Fed governors may say in their upcoming presentations, but it’s hard to argue those aren’t two key factors. Other things to watch include continued Q1 earnings, progress fighting the pandemic both in the U.S. and overseas, any developments with the Biden infrastructure plan, and any news in what’s been an active M&A scene.

FIGURE 1: TECH OUTPACED. This year-to-date chart of the S&P 500 Index (SPX—  candlestick) vs. the Nasdaq-100 (NDX—purple line) shows the broader market generally out-pacing the Tech-heavy NDX so far in 2021. Does this pattern continue in May, or can Tech find new traction? Data Sources: Nasdaq, S&P Dow Jones Indices. Chart source: The thinkorswim® platform. For illustrative purposes only. Past performance does not guarantee future results.

From Famine to Feast with Employment Data

Last May started off with whatever the opposite of a “bang” might be. The April payrolls report released then showed more than 20 million Americans losing their jobs and the unemployment rate skyrocketing to 14.7%. We were all basically at the mercy of an unseen enemy.

Fast-forward to this March. Job growth hit 916,000 and the unemployment rate fell to 6%. That rate is still way above pre-pandemic unemployment, and you can’t forget that millions remain jobless. Even considering all that, it was a really good sign of improvement that could set the stage to see if positive growth continued into April.

Early signals look solid. We’ve just seen two of the lowest initial weekly jobless claims data since before Covid, at under 600,000. That’s still a lot, but remember it was over a million for a while last year. It’s early to make predictions on April payrolls, but these newer numbers continue to see the trend move in the right direction and that’s what you want.

Here are a few data releases and events to watch for in May:

Join us at one of our upcoming webcasts.

The question is whether another huge payrolls number—which isn’t assured, in part because some March gains might have reflected hiring delays from weather-related slowdowns in February—might reignite fears of inflation that sent the 10-year Treasury yield (TNX) from around 0.9% at the start of the year to a 13-month high of 1.77% by late March. The yield dipped back below 1.6% in late April, maybe due to a little market exhaustion but also because the Fed continued to say it sees any inflation as “transitory.”

Judging from how stocks and Treasury yields reacted to the booming March producer and consumer price index numbers released earlier this month, investors took the Fed’s word. Yields basically went nowhere and major stock indices continued to trade near record highs in late April despite a 1% month-over-month climb in producer prices, a 0.6% rise in consumer prices, and a 37-year high in the ISM Manufacturing Index.

Basically, the market got worked up into a lather earlier this year about inflation, research firm Briefing.com said, and the Fed has bought itself some time with its recent messaging. It may be five or six more months before we know if the Fed was right about inflation being transitory, but recent announcements of price hikes from major companies like CocaCola (KO) and Kimberly- Clark (KMB) threw more caution into the mix, and some other companies have said they might have to raise prices if higher costs threaten their margins.

Volatility slid in April along with inflation fears, but if more companies raise prices or if data raise eyebrows, volatility could grow along with the flowers next month. Remember, higher yields (which often accompany inflation concerns) tend to hurt growth stocks more, because expectations for strong future earnings—built into their prices—might get dialed back if investors think their margins could be pressed by higher costs.

Too Early to Talk Rates? Market Doesn’t Think So

As of late April, the CME Group’s (CME) FedWatch tool still showed just a 10% chance of a Fed rate hike before the end of 2021. Many analysts don’t see one coming until late-2022 at the earliest, and the Fed’s own projection is no rate rise until 2023.

Keep an eye on that FedWatch tool during May to see what happens. The very fact that we’re talking about it at all means things have changed. We’re a year into the Fed’s latest near-zero rate regime and investors are starting to look for signs of when it might end.

The Fed has other things it can do besides raise rates if it wants to slow down an economy that Goldman Sachs (GS) predicted in March would grow 8% in 2021. For one thing, the Fed could pull back on the $120 billion a month bond-buying program it’s kept up over the last year. It seems highly unlikely, however, that a more hawkish stance will come anytime soon, based on the Fed’s focus in bringing down unemployment and allowing some inflation over its 2% goal to jumpstart the economy. A recent Barron’s survey of money managers showed almost none expecting the Fed to raise rates this year.

We’ll probably have a better sense of the inflation and growth picture by mid-May after the payrolls report. Until then, what else is on the calendar?

Can Earnings Keep the Pace?

Earnings season, for one thing. It began in mid-April with a very strong showing from Financials and continued with mostly solid results from Tech, telecommunications, and Health Care companies. Sure, there’ve been some disappointments along the way. United Airlines (UAL) missed the Street’s expectations and saw shares fall. Netflix (NFLX) didn’t hit the subscriber growth number Wall Street had in mind, and also disappointed with its guidance. Bed, Bath & Beyond (BBBY) was another one that didn’t impress.

Still, earnings so far have been pretty good. Basically, if as a company you beat consensus on revenue, you’re fine, but if you miss on revenue, you’re getting hammered. People also want to see companies paint a better picture of the future. Those companies that meet or beat on revenue and paint a nice picture for the rest of the year are being rewarded. When a railroad company like CSX (CSX) is saying they see improvement for the second half of the year, that’s a really good sign.

It wouldn’t be surprising if the pattern continues, with investors putting more weight on revenue and guidance when major companies report. Some of the influential firms with reports you might want to watch in May include Walmart (WMT), Pfizer (PFE), Lyft (LYFT), T-Mobile (TMUS), Uber (UBER), Moderna (MRNA), and Deere (DE).

As earnings roll in, the tug-of-war between growth and value stocks is likely to continue. Value took the checkered flag in March before growth and Tech made a comeback in April. Who pulls into the lead as the big race in Indianapolis approaches? That’s one of those things we have to wait around to see.

Maybe you’re wondering why it’s so hard for stocks to go up despite decent earnings this quarter. Well, when you’re near all-time highs, it’s hard to get rewarded. It’s not like people are necessarily looking for a reason to buy more stocks, especially since so many have had incredible runs lately. About 95% of stocks are trading above their 200-day moving averages, The Wall Street Journal reported.

Along with data, keep an eye on commodity prices in May. Crude, lumber, and copper stayed strong in April, which can be a good sign of economic growth but also could weigh on margins for many companies. If crude goes to $70 a barrel, that’s where it might start to be a problem for transport firms.

Remember that crude doesn’t just play nicely in its own sandbox. A sharp rally could make life hard for many companies out there, even “stay at home” ones like Walmart (WMT) and Amazon (AMZN), thanks to their vast supply chains that rely heavily on cheap energy supplies. Copper and lumber are heavily used in manufacturing and housing.

Keep in mind that Washington, D.C., is never far from the picture, either. That was obvious on April 22 when Bloomberg reported that President Biden might propose higher capital gains taxes and stocks took a quick turn south.

There’s also the president’s proposed $2 trillion infrastructure package which could continue to move through Congress in May and which might include a tax increase for corporations. Progress on that is something to consider watching. Perhaps higher taxes aren’t something you look forward to, but tax talk could rain on the market’s picnic even as other May flowers bloom.