July is the dawn of Q2 earnings season, and corporate forecasts for the second half of the year likely loom large. One question is whether companies sense inflation being a big factor, and that’s also something the July Fed meeting could shed more light on. 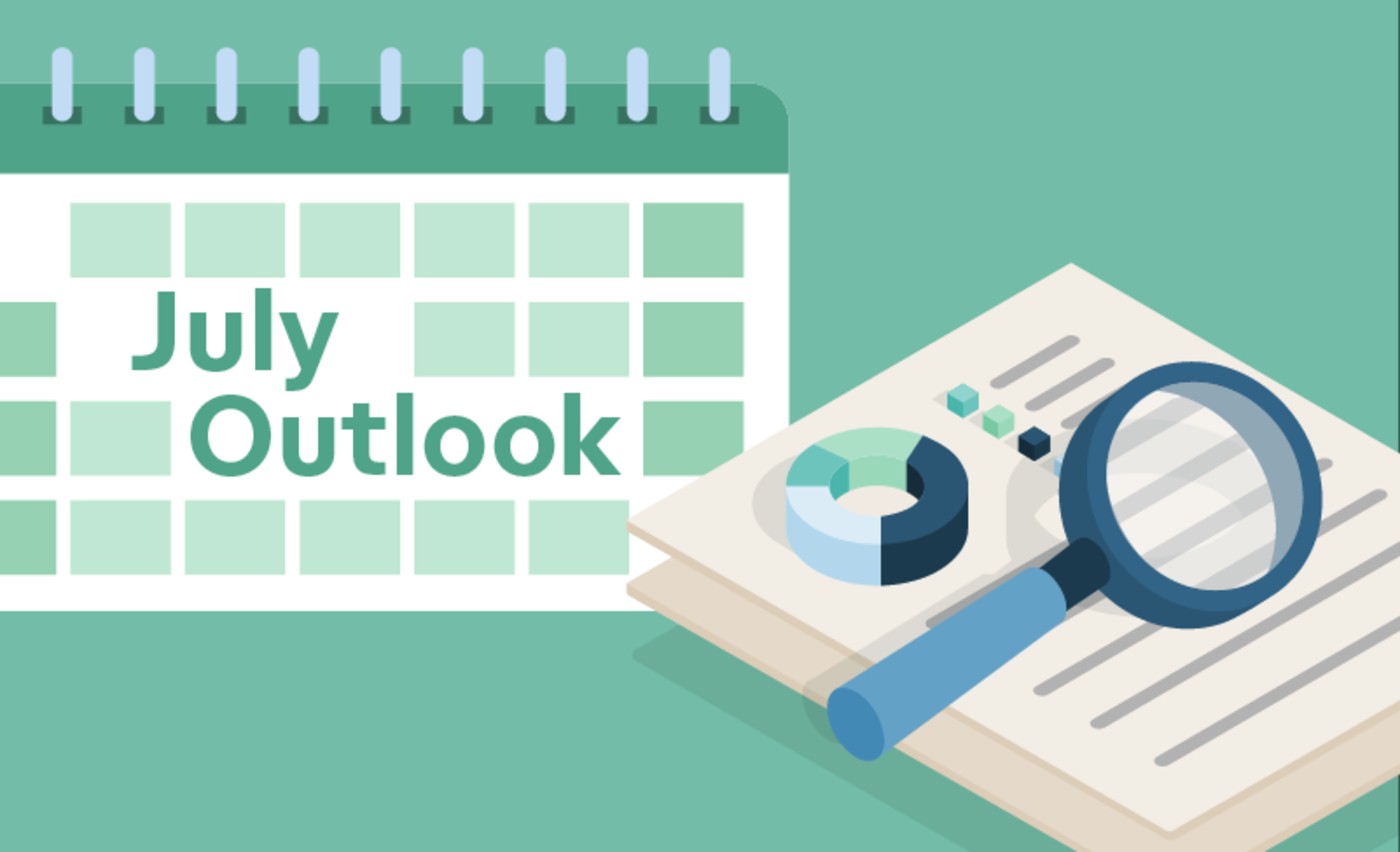 That same phrase could apply to investors once earnings season gets going in July. It’s not so much where the reporting companies have been or what they recently accomplished. Instead, both individual stocks and the market as a whole are more likely to move based on what firms say about the rest of the year.

This could come in the form of official guidance, or more casually through comments on earnings calls. The things they say and forecast could end up having a lot of influence over how markets perform this coming month.

Second half earnings projections likely take center stage once earnings season shifts into high gear in mid-July. The fun starts July 13 when JP Morgan Chase (JPM) becomes the first big bank to report, followed by its counterparts over the next few days.

While you always want to consider corporate guidance, it could be especially important this time around. That’s because corporate America is arguably at a crossroads coming out of the Covid pandemic. Many analysts expect Q2 earnings to be the peak of the recovery, with research firm CFRA predicting a 60.1% overall rise year-over-year in S&P 500 earnings per share. After that, its estimates drop to 20.6% for Q3 as companies start to lap the beginning of last year’s post-Covid recovery.

The S&P 500 Index (SPX) hit a new record high in late June, but it’s also priced at a firm level vs. analysts’ forward earnings estimates. Unless companies overwhelmingly surprise to the upside with their guidance for the second half, it may be tough to find new traction on Wall Street, and this long period of range-bound trading we’ve been in since May might be hard to break out of. When earnings optimism is high overall, like it is now, any company that disappoints or comes up short in some way could see shares get slammed. At the same time, even those that surpass estimates might already have priced in the good news and not see a lot of reward.

As usual, there’s plenty on the July calendar other than earnings reports. Key touch points include another Fed meeting, more possible progress or lack of it on President Biden’s infrastructure bill, and a first look at how China’s economy performed in Q2 after an amazing 18.3% reading in Q1.

At the same time, investors will likely closely watch the usual U.S. economic data during July (see sidebar below), with the July 2 monthly payrolls report in the spotlight following slower than expected April and May jobs growth. Obviously, none of the stuff that troubled Wall Street through May and June like inflation worries and rising crude prices is necessarily going away just because the month changes. Those two items are likely to remain in focus, along with the sudden rise in the U.S. dollar amid ideas that the Fed might turn more hawkish. This could mean the tug-of-war between so-called “growth” and “value” stocks continues for a while.

FIGURE 1: DIVERGENCE DOMINATES. The last three months of performance for the S&P 500 Index (SPX—candlestick) and the 10-year Treasury yield (TNX—purple line) show stocks continuing to track near record highs despite a bit of a hiccup in June even as yields remain near their lowest levels since early 2021. The weak yields despite a more hawkish Fed could reflect worries about a possible economic slowdown. Data Sources: S&P Dow Jones Indices, Cboe Global Markets. Chart source: The thinkorswim® platform. For illustrative purposes only. Past performance does not guarantee future results.

Here are a few data releases and events to watch for in July:

Check out these upcoming webcasts.

Bank Earnings May Not Look as Bright

Last time around, the biggest Wall Street banks helped kick off earnings season with a bang. Firms like JPM, GS, and MS started 2021 on a high note thanks in part to heavy trading activity and fast-rising yields. Both of those factors are traditionally supportive, partly because if more people are trading and investing, more money tends to go into the banks’ wallets. And higher yields traditionally help the net interest margins not just of Wall Street behemoths, but of banks in general. The industry’s profit margins tend to rise when banks can lend money at higher rates.

Like it or not, cryptocurrency played a role in the market’s direction during June. As the month continued, however, it seemed like more investors were able to bifurcate between the volatility and lack of predictability around crypto and “meme” stocks compared with the overall market

Still, when the news flow gets quiet and people start looking for indicators on how to trade, bitcoin and other cryptocurrencies have been something many investors watch. A lot of people like to trade volatility, and when the Cboe Volatility Index (VIX) falls below 17, as it did a bunch of times in June, some of those instruments tend to get more attention.

VIX has historically averaged around 20, and it charged above that level in mid-June after the Fed meeting. Then it sat right back down within a few days. The people who talked earlier in June about an end to the summer doldrums certainly could be debated at this point. However, earnings season could cause action to get more exciting after we get back from the July 4 holiday.

Maybe low volatility and slow but steady markets sound a bit boring to investors who got used to wild swings over the last 20 months or so. Thinking back to the unprecedented events of a year ago, however, a little placidity on Wall Street might be a relief if we get it.

It’s almost mid-year, so it might make sense to check the current standings. The SPX has had a pretty good start to 2021, even if it’s been kind of flat since mid-April. Its 13% gains through late June would represent a great full year, and we’re not even half done. Energy leads all S&P sectors with an amazing 43% gain, which only partly reflects how battered down that sector had been for years even pre-Covid.

With 10.8% gains for the year through late June, the Tech-heavy Nasdaq 100 (NDX) has caught up a bit with the SPX over the last few weeks. Earlier in 2021, relative weakness in Tech stocks perhaps reflected investors’ bigger appetite for so-called “value” stocks over growth, a tug-of-war that continues to play out and might keep going for a while. Energy, Financials, Materials, and Industrials are some of the “cyclical” sectors driving the value emphasis, all of them outpacing Info Tech year-to-date. It’s a major change from the 2017-2020 period when Tech led and everyone else kind of wobbled along.

Meanwhile, the Russell 2000 Index (RUT) of small-caps leads everyone with 16.3% gains through late June, though that’s down a bit from where it was a couple of weeks ago. Its strength doesn’t seem  too surprising considering the old adage that smaller stocks, which tend to have a more domestic focus, often do well in a recovering economy. Also, the “meme” stock rally that catapulted shares of smaller companies like GameStop (GME) and AMC Entertainment (AMC), which helped RUT. So has strength in Financials, and more recently in Health Care. All those sectors have relatively heavy weightings in the RUT index.

Overseas, the European stock markets have been keeping close pace with the SPX, up about 13% so far this year. In China, stocks continue to struggle, up less than 3% year-to-date for the major Chinese index.

If you haven’t checked your portfolio in a while, mid-year is arguably a good time to do it again. The key is to go back to your long-term plan that you hopefully put into place at the end of 2020 and make sure your balances now match what you’d planned.

If you planned the more traditional allocation of 60% of your investment funds into stocks and 40% into bonds, it’s possible that’s changed a bit as stocks climbed and bonds fell earlier this year before settling into their current doldrums. Maybe the balance is closer to 50-50 now. If that’s the case, determine if you’re comfortable with being more conservative or if you need to take on the additional risk by adding to your stock portfolio and selling some fixed income. Every investor is different, so there’s no one right or wrong way to do this except for the way that makes you feel comfortable.

However, one way to decide is to consider whether your life and goals have changed a good deal since December. A few questions to ask yourself include what is your honest risk tolerance?  Consider your age and whether you have time to “make up” any drawdown.

Also, there been any major events in your life? Is there a new baby on the way? Are you getting closer to having college payments? Is an elderly parent in need of your care? All these things can lead to decisions about where and how to invest your money.