July seemed to be a repeat of what investors have experienced for much of 2018: geopolitical news and earnings competing for attention. By the end of the month, strong corporate numbers appeared to have the edge, at least for now. 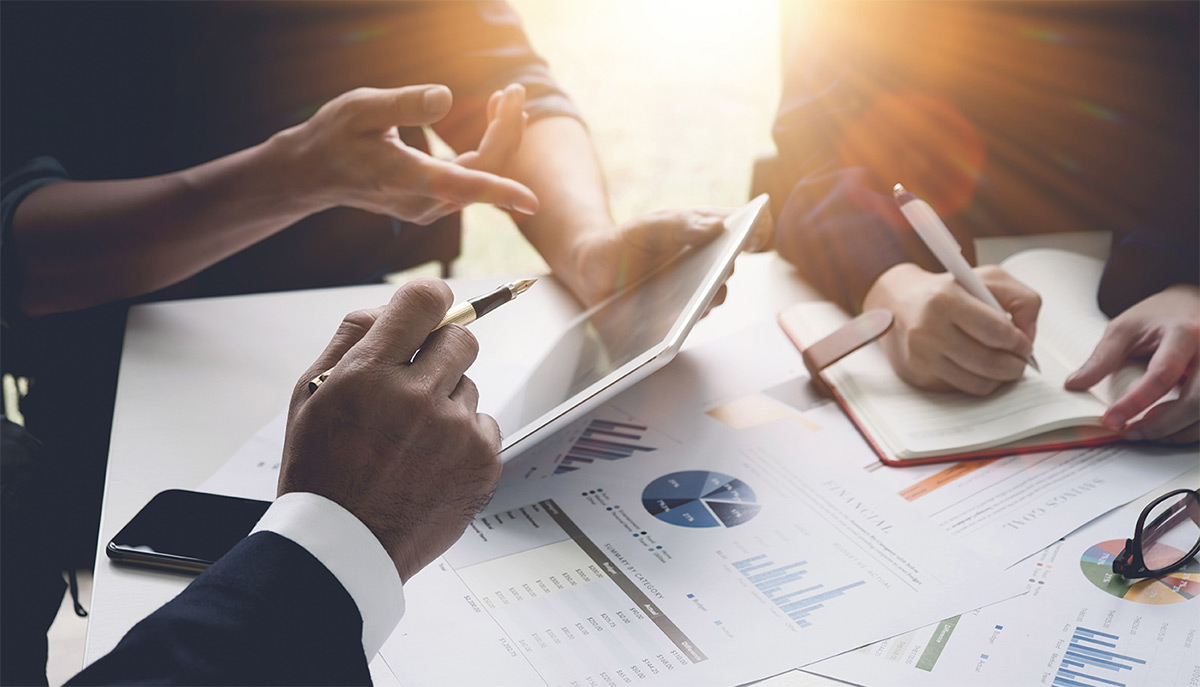 Throughout July, the markets shifted back and forth between geopolitics and solid earnings and economic data. This has been the story for much of 2018.

As Q2 kicked off, the tariff counterchange with China resurfaced, which seemed to cause many investors to adopt a “risk-off” position, meaning they looked for ways to help insulate their portfolios from the geopolitical news. Telecommunications and utilities, generally viewed as defensive plays, gained while financials and other so called “cyclical” sectors sagged as interest rates stayed range bound. Then around mid-July, as earnings season started in earnest, the tide appeared to shift. Investors seemed willing to embrace more risk (“risk-on”), which helped propel the information technology (info tech), consumer discretionary, and financial sectors. Of course, focus could turn again. Geopolitics has had a way of jumping back into the picture and the situation with China and other key trading partners is far from over.

From a technical standpoint, the S&P 500 Index (SPX) broke through the psychological resistance area of 2800 in mid-July, putting it back above that level for the first time since early February. The Nasdaq (COMP) also posted a new all-time high during the month and the Russell 2000 continued to do well overall, perhaps because some investors view small-cap stocks and tech as way to help shield themselves from trade worries.

However, calmer markets don’t mean investors have thrown caution completely to the wind. For the last several weeks, the yield on the 10-year Treasury has been holding relatively steady in the 2.8% to  2.96% range. Earlier in the year, the yield was above 3%. This tight range is a potential sign that even with a healthy economy, the swirl of geopolitical issues is likely to influence decisions.

In addition, the recent strength of the U.S. dollar, which reached one-year highs in mid-July, may have some investors concerned about the possible impact on overseas sales of multinational companies.

The much anticipated Q2 earnings season got off to a solid start this month. Through July 20, nearly 20% of the companies in the S&P 500 had shared their results. Of those, 87% surpassed analysts’ earnings per share (EPS) estimates and 77% beat sales expectations, according to FactSet. Both of these percentages are above the five-year average. So by all accounts, it appears this earnings season may be on track to be a repeat of the last with double-digit earnings growth, although the season is far from over.

Scattered among the strong numbers were some mixed results for the financial and tech sectors. While the majority of big U.S. banks reported better-than-expected earnings, Wells Fargo (WF) fell short as it continued efforts to address regulatory concerns and internal governance issues. On the tech front, Netflix (NFLX) disappointed many investors when its guidance for new subscribers missed the mark. Microsoft (MSFT) and Alphabet (GOOGL) both posted strong quarters due in part to their cloud businesses.

The executive conference calls that accompany earnings announcements not only provide the details behind the numbers but also the prospects for future growth. So going into this earnings season, many investors and analysts were expecting to hear company leaders talk about the potential impact of tariffs. To date, the discussions about trade policy have been minimal, even for multinational companies like General Electric (GE) and Honeywell (HON). This could be a sign that companies don’t foresee an immediate impact on their businesses or that it’s too soon to know because the situation is ever evolving. The relative silence is also another reminder that sometimes it’s what executives don’t say rather than what they do that helps tell the story. For this reason, investors should consider listening to the earnings calls for any company they’re interested in. This first-hand information could arguably go a long way in helping investors allocate assets among different stocks and sectors.

The markets didn’t appear to give the Fed more than a passing thought this month, perhaps because most analysts expect rates to remain unchanged in the near term and Chairman Jerome Powell’s testimony before Congress in mid-July seemed to reinforce this position. During his comments, he reiterated that core inflation appears to be near the Fed’s 2% target and job and wage growth remain strong. Powell did warn that an extended period of high tariffs could hurt the economy while the recent tax reform could help give gross domestic product (GDP) a boost. Given all of this, the Fed “believes that—for now—the best way forward is to keep gradually raising the federal funds rate.”

As of July 24, there was nearly a 90% probability of a third rate hike this year and 60% chance of a fourth one by December 31, according to the CME Group fed funds futures. These probabilities could change in the coming weeks with the next round of economic data and Fed meeting. Overall, the June numbers, released in July, seemed to point toward a strong economy. Retail sales and leading indicators were among some of the most robust figures while new home sales and building permits sagged. It could be worth watching to see if the housing slowdown was a momentary blip or the start of a trend that could spill over to retail and other sectors.

Investors may also want to look at the July jobs report, scheduled to be released on August 3, for any signs of inflationary pressure. This pressure could come in the form of wage growth. Wages have been holding steady in 2018 even as the number of new jobs added each month continues to meet or exceed expectations. At some point, employers may have no choice but to raise salaries in order to attract and retain employees in this tight labor market.

As investors have seen many times this year, geopolitical headlines can drive the market downward only to have it snap back after the dust settles. Likewise, any uptick due to solid earnings could be quickly erased by the announcement of another tariff. There’s no telling what will drive the market from one day to the next. So rather than try to time it, investors should look to create a diversified portfolio of stocks, bonds, and possibly other securities that can help them weather changing conditions. Depending on their goals and investment preferences, this might involve investing in stocks of various sized companies, adjusting the weighting of different sectors, or building a bond ladder with different maturities.

Looking to stay on top of the markets on a daily basis? Check out my Daily Market Update on the Ticker Tape.  Or tune into the TD Ameritrade Network, which is live programming that brings you market news and helps you hone your trading knowledge.