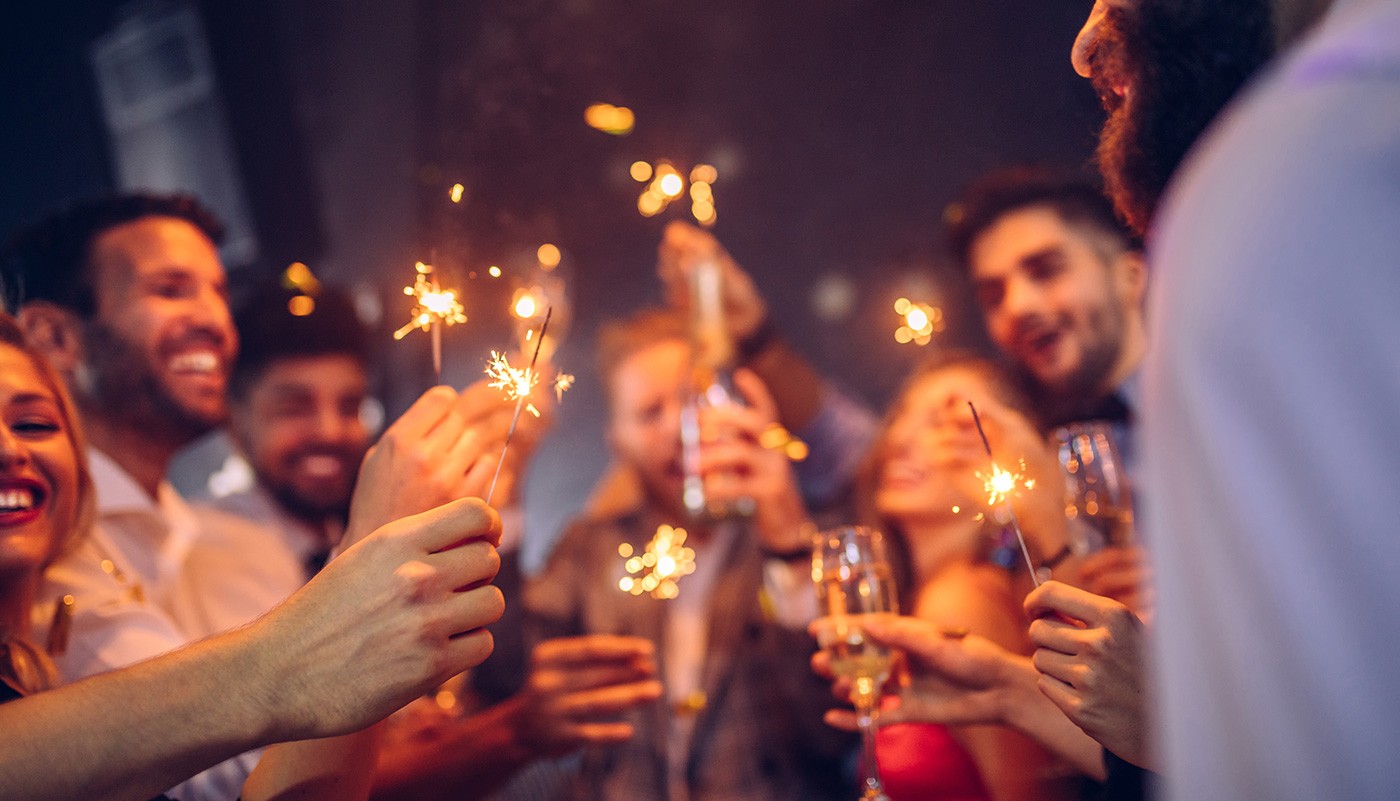 Relatively healthy Q1 earnings and better-than-expected U.S. economic growth helped ease fears of an economic slowdown in April, sending stocks back toward all-time highs. At the same time, inflation concerns continued to ease and borrowing costs fell, keeping the Fed on the sidelines.

For most of the month, the stock market remained on an upward track. The S&P 500 Index (SPX) posted a new all-time closing high in late April, and was up about 17% year-to-date as of April 26. In a potential warning sign of possible challenges ahead, however, the month also saw a strengthening dollar and rising crude oil prices.

Several positive economic drivers the past month arguably gave stocks a lot to celebrate, but investors should also remember to consider keeping enthusiasm in check. In other words, while stocks have been climbing steadily for most of 2019, many investors are on guard for possible higher volatility from current very low levels as measured by the VIX. After all, this year seemingly any bit of bad news has roiled the markets and triggered sudden losses.

But April didn’t feature much bad news. The first government estimate for Q1 gross domestic product (GDP), released April 26, showed the economy expanded by 3.2%, well above the 2.5% growth analysts expected. Disposable personal income increased by about 3%, which might bode well for more possible strength in sectors like Retail and Technology.

On the jobs front, after a fairly weak report in February that raised concerns about a potential economic slowdown, job creation really bounced back. In March, 196,000 jobs were created, about 20,000 above expectations, and way above the growth of 33,000 in February. Within those numbers, job growth in manufacturing and construction stagnated, while we saw stronger gains in health care and business and professional services. Average hourly wages grew 3.2% year-over-year in March, another sign of possible economic strength, while the overall unemployment rate stayed at 3.8%, near 50-year lows.

One thing to keep in mind about jobs is that no one month is a trend. Instead, consider keeping focused on the three-month trend, which remains above 180,000, a healthy growth picture. It’s down, however, from the average monthly jobs growth of 223,000 in 2018.

Back when the strong March jobs report came out in early April, it spurred a little concern that strength in the economy might give the Federal Reserve—which has remained dovish this year—a reason to change its mind on the pause in rate hikes. Yields on the 10-year Treasury note rose to nearly 2.6% soon after the data, up sharply from lows around 2.35% in late March.

However, it seems likely that the data would have to continue getting steadily better for quite a while in order to get the Fed off the sidelines and back onto the field. The GDP Price Deflator rose just 0.9% in Q1, the government said, down from 1.7% in Q4 and below third-party consensus estimates. As Briefing.com noted, the report appeared to show the economy continuing to grow while inflation pressure stayed muted. That doesn’t sound like a recipe for rate hikes, and investors aren’t treating it that way. CME futures still show zero percent chances of a Fed rate hike in 2019 and high odds of a rate cut.

With inflation concerns retreating, yields also fell as April moved forward. By April 26, the 10-year yield was back down at 2.5%, putting the market in rare circumstances. It’s unusual to see rates so low amid 3% economic growth, but some analysts say weakness in overseas economies and low interest rates in Europe are pushing down U.S. yields. It seems like a long time since last fall, when U.S. yields were steadily climbing above 3% and the Fed was in a hiking mode.

IPO Market Steps Into the Spotlight

The market for initial public offerings (IPOs) got off to a slow start this year, but in April things started to pick up here. As usual, IPOs, even those with big brand names, have proven unpredictable in regards to their performance. But this month’s crop of newly public companies on the whole shows interest here may be getting warmer.

One exception to that might have been one of the more hyped IPOs in April—ride-sharing company Lyft (LYFT). While it saw a strong first trading day, shares plummeted in the second day of trade and have yet to recover. They were trading near $56.30 as of April 26, far from their IPO price of $72.  Apparel maker Levi Strauss & Co. (LEVI) had a longer run in the green, thanks in part to a better than expected quarterly report, but it’s shares have also drifted below its IPO price.

Again, it was a different story for other IPOs that launched in April. Social media site Pinterest (PINS) as well as Zoom Video Communications (ZM), which provides conferencing technology, have held in positive territory so far this month. PagerDuty (PD), a cloud computing company, launched its IPO April 11 with an opening price of $36.75, or 50% above its IPO price. Now, PD is trading above $40 per share, as of April 26.

Looking forward, investors might be eagerly awaiting the launch of Uber, which is likely to start trading in May. With a valuation that could reach $100 billion (versus LYFT’s valuation of $18 billion), Uber’s on track to be the largest IPO of the year, and among the largest ever, some analysts have said.

Even when the market for IPOs is booming, it’s important for investors to avoid getting too caught up in the enthusiasm. Remember, IPOs can bring quick rewards as shares find their place in the market, but they can just as easily bring losses. Try not to confuse a popular product with a stock, because the financials of a company are ultimately what might matter most. Just because you like a company doesn’t necessarily mean you have to like the stock, too.

Heading into this earnings season, analysts didn’t really expect the kind of robust company financial growth many investors have gotten used to the last couple of years, but so far many quarterly results have been better than expected. Stronger than expected earnings arguably played the biggest role in sending the SPX to its new all-time closing high. That said, analysts had pretty low expectations for Q1 results going into earnings season, so that might be worth considering when headlines tout companies beating estimates. For most firms, it’s not a high bar to climb.

Through April 25, S&P 500 companies were reporting an average of 3.9% earnings declines in Q1 vs. a year earlier, FactSet reported. Results have tended to improve over the course of recent earnings seasons, but they really haven’t made much progress so far in April from pre-season expectations.

First, big banks hit the scene with mixed results. Morgan Stanley (MS) beat expectations on earnings and revenue, but its profit fell year-over-year on what it said was a slow Q1 trading environment. That matters because MS is a firm that’s taken the mantle on the trading business in recent quarters, so it relies more on trading than many of its competitors. Bank of America (BAC) did a little better than some analysts had expected on net interest income.

Remember, some of the banks might have gotten a lift earlier in Q1 from the Fed’s December interest rate hike, something that became apparent with better-than-expected earnings from JPMorgan (JPM). Goldman Sachs (GS) took care of business on the earnings side of the equation in Q1, easily surpassing third-party consensus estimates. However, revenue of $8.81 billion came in under third-party consensus of $9.07 billion, which may be reflecting weaker trading activity. GS’s fixed-income trading revenue fell 11%.

Moving on from banks, the earnings news presented kind of a mixed picture as of late April. The last few days of the month were pretty solid, but with expectations being so low, companies that beat earnings weren’t being rewarded as much as companies that missed forecasts were getting smacked.

That was true of semiconductor company Intel (INTC), which saw shares plummet more than 7% on April 26 after the company gave softer-than-expected revenue guidance for 2019. That looks disappointing for the semiconductor space, which had been flying high in the stock market going into earnings season but now is playing defense. The chip industry is often seen as a leading indicator because its products are present in so many electronic devices and games.

It also wasn’t too clear what to make of Amazon (AMZN), which reported a blowout quarter, with earnings per share handily beating expectations. However, its Q2 operating profit guidance fell short of analyst expectations.

On the Industrial side, traders slapped a sticky note saying “sell” on the back of 3M (MMM) after the multinational conglomerate reported earnings and revenue that missed expectations, announced 2,000 layoffs, and cut its 2019 earnings forecast. Shares of MMM dived nearly 13% in their worst day since Black Monday in October 1987. Weak demand in China contributed to the company’s disappointing quarterly performance.

Speaking of China, the tariff situation remained fluid through most of April, with the U.S. administration reporting signs of progress in trade talks but China barking back at the U.S. after President Trump announced the pending end to sanctions exemptions on Iranian oil exports. It’s unclear if that could represent a possible speed bump as the countries try to reach some sort of trade agreement.

China arguably contributed to April’s big stock market gains on April 16 when it reported better-than- expected Q1 economic growth of 6.4%. That was higher than the 6.3% that analysts had expected, Reuters reported, and might have reflected the impact of Beijing’s recent economic stimulus. However, Chinese growth remains the lowest in many years, possibly posing a challenge for U.S. multinationals like Caterpillar (CAT) and Apple (AAPL). MMM has already felt the pressure, evidently.

For most of April, crude oil prices climbed steadily higher as OPEC stayed pat on cuts and as the U.S. ended sanctions waivers on Iranian exports. Crude posted six-month highs by late in the month, briefly topping $66 a barrel for West Texas Intermediate (WTI) on April 22.

Then came the reversal, though it’s unclear how long it might last. In an apparent example of the power words can have on a market, crude prices took a 4% nosedive on April 26 after President Trump said he’d told OPEC to address rising values. OPEC production had fallen to four-year lows in March, and turmoil in Venezuela and Libya had added to perceptions of supply tightness.

It’s kind of interesting to note that despite the high prices in April, U.S. active oil rigs fell to a 14-month low. However, U.S. crude production remained at all-time highs of 12.2 million barrels a day for much of the month, possibly helping ease the price impact of lower OPEC production.