Virtual reality is gaining real traction. Science fiction is becoming fact via this fast-growing technology niche. Find out which companies are leading the wa 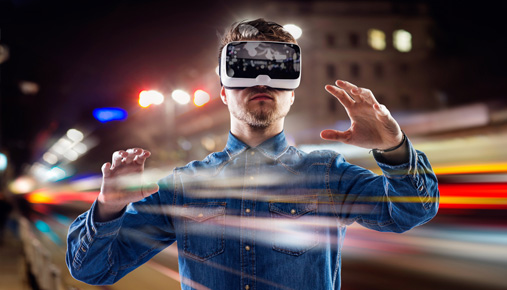 Virtual reality uses computer screens or a head-mounted display (HMD) to replicate an environment. The technology simulates a user's physical presence in a way that allows her to interact with the virtual environment and create a sensory experience.

But virtual reality’s uses may grow. Research firm Gartner sees head-mounted displays moving in business, too. By 2018, Gartner expects that 26% of headsets will be created for business use for tasks such as equipment repair, inspections, and maintenance.

There’s a lot of industry excitement over virtual reality, but the hype hasn’t yet translated into sales.

In April, SuperData Research, which provides research for the playable media and digital games industry, lowered its global virtual reality revenue forecast for 2016 by 22%, down to an estimated $2.9 billion in combined sales of hardware and software. SuperData concluded that demand was lagging for now, saying, “Initial demand for VR devices has been driven primarily by gamers and industry hopefuls. And while demand has outpaced early expectations, this does not suggest consumers are ready to buy just yet.”

Still, the research firm stands by its longer-range forecasts, saying by 2019, sales could reach $22.86 billion and then almost double to $40.26 billion by 2020. This growth is expected to be driven by pricing decreases and increased software development.

Cost is an issue right now, according to SuperData. Surveyed consumers who are aware of virtual reality say headsets are too expensive, which the research firm says is a significant barrier to adoption.

For instance, the price for an Oculus Rift package, which includes the headset, sensor, remote, cables, Xbox One controller, and a game is $600. Competitor HTC Vive is priced higher, at $700, and includes a headset, two wireless controllers, two base stations, link box, earbuds, and Vive accessories.

"New virtual reality HMDs for consumers, such as the HTC Vive, Oculus Rift, Sony PlayStation VR, and Microsoft HoloLens are expected to be available along with video games and entertainment content as well as business applications critical for their success," said Brian Blau, research director at Gartner.

An Innovative Trading Platform That Just Gets It

Practice trading on the thinkorswim® platform by TD Ameritrade without risking a dime. Register for a paperMoney® account for free.

Register for a free 60-day trial of thinkorswim »
Print