Australia delicately balances services and industry; both rise and fall with commodities’ fortunes. Can the Land Down Under dig out from the latest drop? 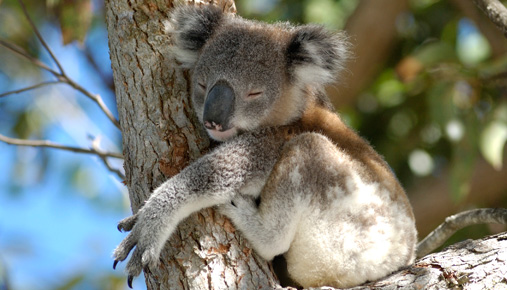 When I arrived in Australia earlier this year to launch the next leg in my trading career, it immediately felt like home. Beautiful Sydney combines the best parts of San Francisco, Seattle, and New York, in my opinion. It’s busy with new construction around every corner. And outside the window of my Brisbane apartment, I see familiar brands including Oracle (ORCL), IBM (IBM), Caterpillar (CAT), Boeing (BA), McDonald’s (MCD), and privately held Subway—signs that U.S. multinationals continue to bank on growth in this old penal colony turned cosmopolitan hotspot and Asian commodities trading hub.

It’s clear this natural resource stronghold is increasingly services oriented as it competes on the global economic stage. But do Australia’s economic fortunes still largely rise and fall with commodities’ supply and demand? You bet. And these are volatile times for commodities and the markets that rely on them.

Services account for about 70% of Australian gross domestic product, and the country’s GDP is growing at a 2.3% clip so far this year, the Royal Bank of Australia says. The services sector accounts for about 75% of jobs. Of the 23.6 million people who call Australia home, 11.7 million are employed, according to government data, keeping the unemployment rate hovering around 6.2%.

But even services are hitched directly to commodities; much of the services sector supports Australia's industry sector, including mining, equipment, food, chemicals, and steel. Australia exports commodities like coal, iron ore, gold, meat, wool, alumina, and wheat primarily to trading partners in Asia. China accounts for a whopping 36% of Australian exports, and Japan takes another 18%, government data shows.

The heavy dependence on commodities served Australia well in the early 2000s because prices were booming. Remember the peak in oil, and gold at $1,900 an ounce? The boom helped the Australian economy grow aggressively, and its stock market performed relatively well during this period. But these once-hot commodities have cooled in recent years (figure 1).

FIGURE 1: BOOM AND BUST? The Thomson Reuters/Jefferies Commodity Research Bureau (CRB) Index—tracking crude oil, gold, aluminum, wheat, and more—is down about 40% since 2011. Source: StockCharts. For illustrative purposes only. Past performance does not guarantee future results.

The drop in commodities prices was caused by a number of factors. With hindsight, it’s easy to see the huge buildup in the supply of crude oil owed to new drilling technologies. New mines opened, and the supply of gold, iron ore, and other metals swelled. More recently, demand for commodities in Asia has slowed as Chinese growth projections were downgraded. What’s more, the surging U.S. dollar has hurt commodity prices. For instance, the big leg lower in the CRB Index in late 2014 coincided with a big move higher in the U.S. dollar.

As of this writing, global commodities were taking another beating. Anticipation of a U.S. interest rate hike and the related U.S. dollar's strength—as well as soft global growth and a supply glut—weighed on demand for raw materials. Gold in late July fell for some 10 days in a row before a brief respite, logging its steepest drop in almost two years and moving below $1,100 an ounce. Crude futures were also heading south, trading near $50 a barrel depending on the futures market used for reference.

This chart compares the performance since 2007 of a U.S. stock market (S&P 500) in red, German (DAX) in brown, and Australian (ASX 200) in blue. Source: Yahoo Finance. For illustrative purposes only. Past performance does not guarantee future results.

Despite the underperformance of the Australian stock market compared with the U.S. and Germany, valuations down under are, well, average, according to most analysts.

Figure 3 charts the trailing price-to-earnings (P/E) ratios of the MSCI World Index and Australia. The MSCI World Index comprises developed markets like the U.S., Japan, U.K., France, Switzerland, and others. Australia is trading at a slight discount, but by no means represents a compelling value versus these other markets based on historical performance. In fact, the Australian stock market is near its 30-year historical average valuation.

FIGURE 3: LEADER IN THIS CATEGORY? Comparing the yields of Australian stocks to those of other developed countries tracked in the MSCI Index. Source: Reserve Bank of Australia. For illustrative purposes only. Past performance does not guarantee future results.

The underperformance of the Australian stock market relative to other developed markets does offer a big advantage, however, and that comes from dividend yields.

Where stock prices have risen in the U.S. and Germany, for example, dividend yields have fallen. But they've been quite juicy in Australia. In a world of low or zero interest rates, the dividend yield of Australian equities has drawn increased interest, representing a margin of safety for some investors should developed world economies continue slowing.

FIGURE 4: RELATIVELY SPEAKING. The low interest rate/low yield climate for investors in recent years had many investor scouting for even relatively higher dividends wherever they could find them, including in Australia. Source: Reserve Bank of Australia. For illustrative purposes only. Past performance does not guarantee future results.

The fat dividend yields in Australia come with risk. You guessed it: further downside in commodity prices. On this front, it's important to watch economies and stock markets across Asia, particularly China and Japan.

Further slowing in China or weakness in Japan would presumably lessen demand for commodities, which would in turn hurt the Australian economy and stock market. The markets in China and Japan can serve as leading indicators when it comes to analyzing Australia.

Additionally, it's worth noting that the CRB Index, with its drop to 210 earlier this year, moved toward the lower end of its multi-decade range. Over the last 35 years, the CRB Index traded down to around 200 many times and staged a meaningful recovery every time. There are no guarantees, of course, but people gotta eat. And build. And most feel they have to drive. New-economy Australia’s fundamental base in resources will always be a global growth story worth tracking.

Dig in Down Under

There are many ways to gain exposure to Australian stocks as a U.S. trader. A number of exchange-traded funds (ETFs) that track Australian stocks trade in the U.S. Additionally, there are hundreds of Australian companies that list on U.S. exchanges.

You can find some of these stocks by searching for American Depositary Receipts (ADRs) on the Stock Screener on tdameritrade.com.

Carefully consider the investment objectives, risks, changes, and expenses of an exchange-traded fund before investing. A prospectus, obtained by calling 800-669-3900 (free), contains this and other important information about an investment company. Read carefully before investing.